P1510 - Rare Finding of Pseudomelanosis at the Gastroesophageal Junction: A Case Report 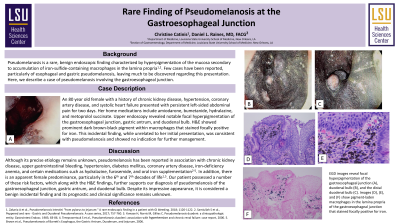 Introduction: Pseudomelanosis is a rare, benign endoscopic finding characterized by hyperpigmentation of the mucosa secondary to accumulation of iron-sulfide-containing macrophages in the lamina propria1,2. Few cases have been reported, particularly of esophageal and gastric pseudomelanosis, leaving much to be discovered regarding this presentation. Here, we describe a case of pseudomelanosis involving the gastroesophageal junction.

Discussion: Although its precise etiology remains unknown, pseudomelanosis has been reported in association with chronic kidney disease, upper gastrointestinal bleeding, hypertension, diabetes mellitus, coronary artery disease, iron-deficiency anemia, and certain medications such as hydralazine, furosemide, and oral iron supplementation2-5. In addition, there is an apparent female predominance, particularly in the 6th and 7th decades of life1,5. Our patient possessed a number of these risk factors, which along with the H&E findings, further supports our diagnosis of pseudomelanosis of the gastroesophageal junction, gastric antrum, and duodenal bulb. Despite its impressive appearance, it is considered a benign incidental finding and its prognostic and clinical significance remains unknown.