P1547 - Hemospray Hemostasis: An Effective Use in a Case of Lower GI Bleed in Crohn’s Colitis 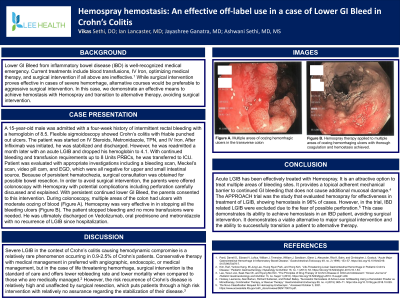 Case Description/Methods: A 15-year-old male with Crohn’s colitis was admitted with acute LGIB with a HGB of 4.1. He had been on Infliximab and steroids for outpatient maintenance therapy. With continued bleeding and transfusion requirements up to 8 U PRBCs, he was transferred to ICU. He was evaluated with a bleeding scan, EGD, Meckel’s scan and video pill cam which were negative for any upper or small intestinal source. Because of persistent hematochezia, surgical consultation was obtained for possible colonic resection. In order to avoid surgical intervention, the parents were offered colonoscopy with Hemospray with potential complications including perforation carefully discussed and explained. With continuing hemorrhage, the parents consented to this intervention. During colonoscopy, multiple areas of colon had ulcers with moderate bleeding. Hemospray was very effective in stopping bleeding from all ulcers. The patient stopped bleeding and no more transfusions were needed. He was ultimately discharged on Vedolizumab and oral prednisone with no recurrence of LGIB since this hospitalization.

Discussion: Acute LGIB has been effectively treated with Hemospray. It provides a topical adherent mechanical barrier to continued GI bleeding. The non-contact application does not cause additional mucosal damage. In the APROACH study evaluating Hemospray’s efficacy, patients with LGIB related to IBD were excluded for fear of possible perforation. However, this case demonstrates its ability to achieve hemostasis in an IBD patient, avoiding surgical intervention.