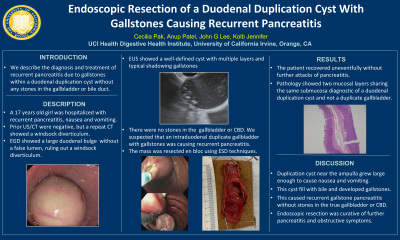 Introduction: We describe the diagnosis and treatment of recurrent pancreatitis due to gallstones within a duodenal duplication cyst without any stones in the gallbladder or bile duct.

Case Description/Methods: A 17 year old girl was hospitalized with recurrent pancreatitis, nausea and vomiting. Previous ultrasound and CT were reportedly unrevealing, but a repeat CT showed a windsock diverticulum and she was referred for therapy. Endoscopy showed a large bulge filling the second portion of the duodenum, but without a false lumen diagnostic of a windsock diverticulum. EUS showed a well-defined wall with multiple layers and typical shadowing gallstones. There were no stones in the gallbladder or the bile duct which were seen in the usual location, proximal to the cyst. FNA of the cyst showed bile. We suspected that an intraduodenal duplicate gallbladder with gallstones was causing recurrent pancreatitis. ERCP showed the ampulla to be at the base of the cyst. Guidewire preferentially entered the cyst and bile duct cannulation failed. Pancreatogram was normal and a prophylactic stent was placed after sphincterotomy. The mother and the patient wished to avoid open surgery, so the cyst was resected the next day. We considered snaring the cyst, but it was too large to clearly see the margins or capture within a snare. We used a DualKnife (Olympus, Tokyo Japan) and electrocautery to perform full thickness dissection of the cyst using the pancreatic stent as a guide to avoid injuring the pancreas. The cyst was opened afterwards showing multiple black pigmented stones. The patient recovered uneventfully without further attacks of pancreatitis. Pathology showed two mucosal layers sharing the same submucosa diagnostic of a duodenal duplication cyst and not a duplicate gallbladder. Repeat ERCP showed resolution of the cyst, mild biliary dilation and a normal pancreatic duct.

Discussion: Duplication cysts can develop in any part of the intestine and are usually incidental asymptomatic findings. Our patient formed the cyst near the ampulla causing it to fill with bile and develop gallstones presumably due to stasis. The cyst grew large enough to cause intermittent obstruction symptoms with nausea and vomiting as well as gallstone pancreatitis without having gallbladder or bile duct stones. Fortunately, our patient developed her duplication cyst within the lumen of the duodenum which allowed endoscopic resection. 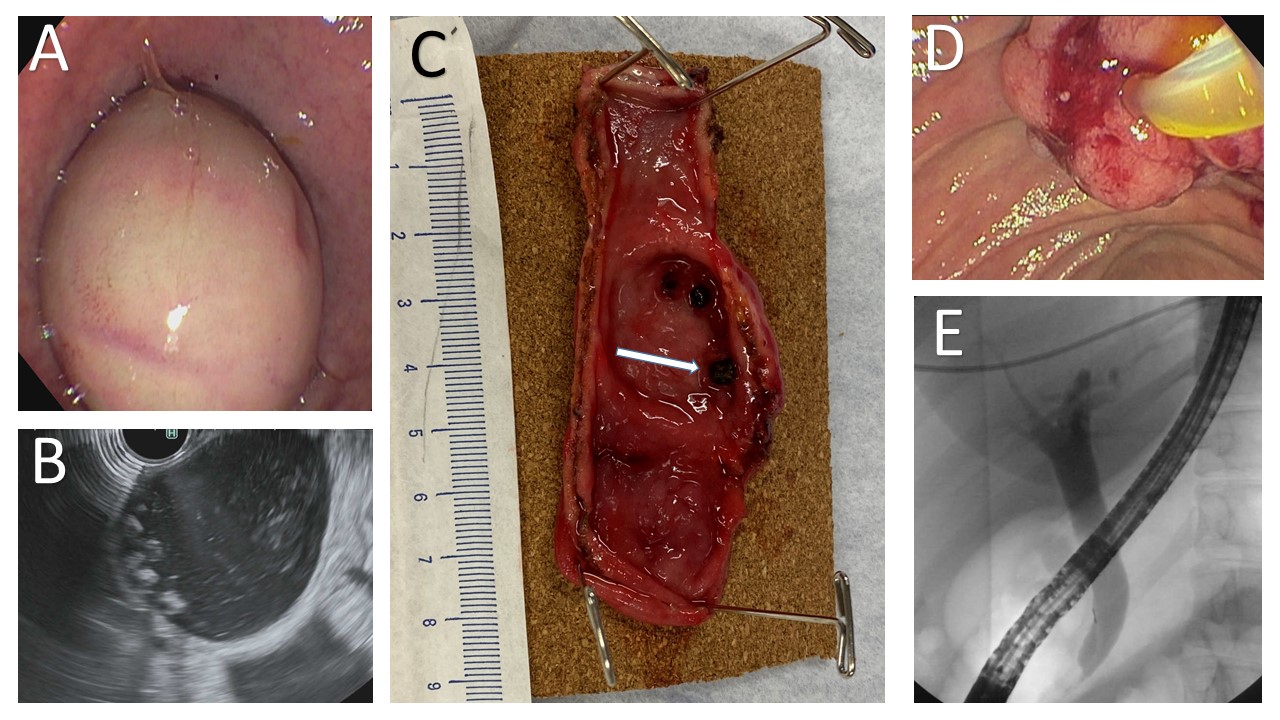