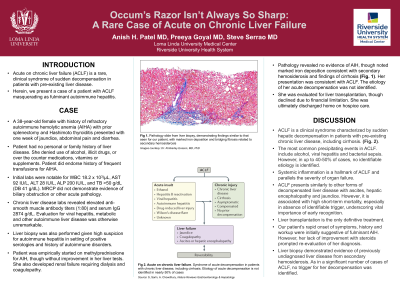 Case Description/Methods: A 38-year-old female with history of autoimmune hemolytic anemia and Hashimoto's thyroiditis presented with one week of jaundice. She had no personal or family history of liver disease. She denied use of alcohol, illicit drugs, or over the counter medications, vitamins or supplements. Initial labs were notable for WBC 18.2, AST 92 IU/L, ALT 28 IU/L, ALP 200 IU/L, and TB >50 g/dL (DB 41 g/dL). A MRCP was negative for any acute pathology. Chronic liver disease workup revealed elevated anti-smooth muscle antibody titers (1:80) and serum IgG 2874 g/dL, though otherwise unremarkable. These findings raised concern for autoimmune hepatitis (AIH), particularly given the patient's autoimmune history. A liver biopsy was completed and she was empirically started on methylprednisolone, though without improvement in liver tests. Her condition worsened with development of acute renal failure requiring dialysis, encephalopathy and coagulopathy. Pathology from liver biopsy revealed no evidence of autoimmune hepatitis, though noted marked iron deposition consistent with secondary hemosiderosis and findings of cirrhosis. The cause of her acute decompensation was not clearly known. She was evaluated for liver transplantation, though declined due to financial limitations. Patient was ultimately discharged home on hospice care.

Discussion: ACLF is a clinical syndrome characterized by sudden hepatic decompensation in patients with pre-existing chronic liver disease. The most common precipitating events in ACLF include alcohol, viral hepatitis and bacterial sepsis. However, in up to 40-50% of cases, no identifiable etiology is identified. Systemic inflammation is a hallmark of ACLF and parallels the severity of organ failure. ACLF presents similarly to other forms of decompensated liver disease with ascites, hepatic encephalopathy and jaundice. However, it is associated with high short-term mortality, especially in absence of identifiable trigger, underscoring vital importance of early recognition. In this case, our patient was found to have pathology suggestive of secondary hemosiderosis and cirrhosis due to prior transfusions. Her history of autoimmune disorders and positive serologies were suggestive of AIH, though lack of improvement with steroids prompted re-evaluation of her diagnosis. Liver transplantation is the only definitive treatment.