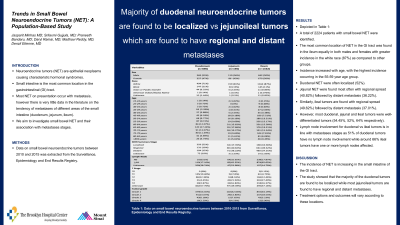 Introduction: Neuroendocrine tumors (NET) are epithelial neoplasms causing characteristic hormonal syndromes and small intestine being the most common location in the gastrointestinal tract. Most NET on presentation occur with metastasis, however there is very little data in the literature on the tendency of metastases of different areas of the small intestine (duodenum, jejunum, ileum). We aim to investigate small bowel NET and their association with metastases stages.

Methods: Data on small bowel neuroendocrine tumors between 2010 and 2015 was extracted from the Surveillance, Epidemiology and End Results Registry.

Results: A total of 2224 patients with small bowel NET were identified. Based on this study, the most common location of NET in the GI tract was found in the ileum equally in both males and females with greater incidence in the white race (87%) as compared to other groups. Incidence increased with age, with the highest incidence occurring in the 55-59 year age group. Duodenal NET were often localized (52%). On the other hand, Jejunal NET were found most often with regional spread (40.82%) followed by distant metastasis (36.22%). Similarly, ileal tumors are found with regional spread (49.62%) followed by distant metastasis (37.01%). However, most duodenal, jejunal and ileal tumors were well-differentiated tumors (54.45%, 52%, 64% respectively). Lymph node involvement for duodenal vs ileal tumors is in line with metastases stages as 51% of duodenal tumors have no lymph node involvement while around 66% ileal tumors have one or more lymph nodes affected.

Discussion: The incidence of NET is increasing in the small intestine of the GI tract. The study showed that the majority of the duodenal tumors are found to be localized while most jejunoileal tumors are found to have regional and distant metastases. Treatment options and outcomes will vary according to these locations.

Table: Table 1: Demographic and clinical characteristics of the study cohort