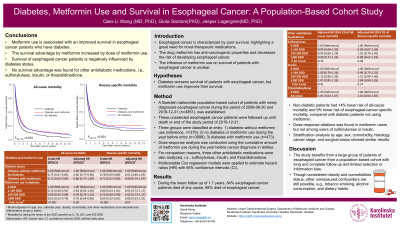 Introduction: Diabetes is common among the elderly population and associated with an increased risk of mortality from some cancers. The antidiabetic medication metformin has anti-cancer properties and decreases the risk of developing esophageal cancer. However, it is unclear if diabetes worsens survival and whether metformin use improves survival in esophageal cancer.

Methods: This nationwide population-based cohort study included all patients with a newly diagnosed esophageal cancer during 2006-2018 in Sweden with follow-up through 2019. Diabetes and metformin use was analyzed in relation to risk of all-cause and disease-specific mortality using multivariable Cox regression. The hazard ratios (HR) with 95% confidence intervals (CI) were adjusted for age, sex, calendar year, obesity, comorbidity, and use of non-steroidal anti-inflammatory drugs or statins. For comparison reasons, three other antidiabetic medications were also analyzed, i.e., sulfonylureas, insulin, and thiazolidinedione. Dose-response associations were assessed and to avoid immortal time bias, the landmark method was used. Stratified analyses and sensitivity analyses were further applied. All the analyses followed a pre-defined protocol.

Results: Among 4851 incident esophageal cancer patients (8404 person-years), 4072 (84%) died during follow-up. Compared with esophageal cancer patients with diabetes but not using metformin, decreased all-cause mortality was found among non-diabetic patients (without metformin) (HR 0.86, 95% CI 0.77-0.96) and diabetic patients who used metformin (HR 0.86, 95% CI 0.75-1.00). The HRs of all-cause mortality decreased with a higher daily dose of metformin (p for trend 0.043). The corresponding risk estimates for disease-specific mortality were similar but slightly attenuated. The results were also similar in separate analyses of esophageal cancer patients with adenocarcinoma or squamous cell carcinoma, with tumor stage I-II or III-IV, and in those who had or had not undergone surgery. No associations with mortality outcomes were found for the use of sulfonylureas, insulin, or thiazolidinedione.

Discussion: Diabetes increases the risk of mortality among esophageal cancer patients. Use of metformin was instead associated with improved survival and the beneficial association had a dose-dependent appearance. But use of other antidiabetic medications did not influence mortality.