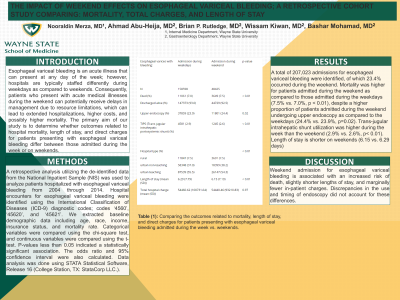 Introduction: Esophageal variceal bleeding is an acute illness that can present at any day of the week; however, hospitals are typically staffed differently during weekdays as compared to weekends. Consequently, patients who present with acute medical illnesses during the weekend can potentially receive delays in management due to resource limitations, which can lead to extended hospitalizations, higher costs, and possibly higher mortality. The primary aim of our study is to determine whether outcomes related to hospital mortality, length of stay, and direct charges for patients presenting with esophageal variceal bleeding differ between those admitted during the week or on weekends

Discussion: Weekend admission for esophageal variceal bleeding is associated with an increased risk of death, slightly shorter lengths of stay, and marginally fewer in-patient charges. Discrepancies in the use and timing of endoscopy did not account for these differences

Table: Comparing the outcomes related to mortality, length of stay, and direct charges for patients presenting with esophageal variceal bleeding admitted during the week vs. weekends.