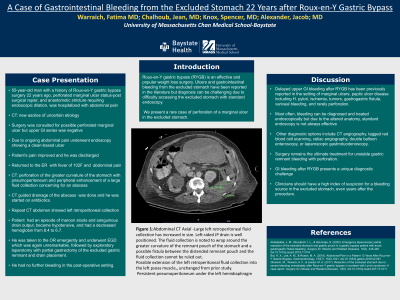 Case Description/Methods: A 55-year-old man with Roux-en-Y gastric bypass surgery 22 years ago, perforated marginal ulcer with surgical repair, and anastomotic stricture requiring dilation, was hospitalized with abdominal pain and new CT finding of ascites of uncertain etiology. Surgery was consulted for possible perforated marginal ulcer but upper GI series was negative and no surgical intervention was recommended. He continued to endorse abdominal pain for which he underwent endoscopy showing a clean-based ulcer. Over the course of admission, patient's pain improved and he was discharged. The patient returned after developing a fever with recurrent pain. CT was concerning for perforation of the greater curvature of the stomach with frank pneumoperitoneum and peripheral enhancement of a large fluid collection concerning for an abscess. CT guided drainage of the abscess was done and he was started on antibiotics. Repeat CT abdomen showed retroperitoneal collection despite drain being in position. TPA was administered through the drain with improvement in output. The patient then had an episode of maroon stools and sanguinous drain output, became hypotensive, and had a decreased in hemoglobin. He was taken to the OR emergently and underwent EGD which was unremarkable, followed by exploratory laparotomy with partial gastrectomy of the excluded gastric remnant. He had no further bleeding post-operatively.

Discussion: Delayed upper GI bleeding after RYGB has been reported in the setting of marginal ulcers, peptic ulcer disease including H. pylori, ischemia, tumors, gastrogastric fistula, variceal bleeding, and rarely perforation. Often, bleeding can be diagnosed and treated endoscopically but due to the altered anatomy, standard endoscopy is not always effective. Other options include CT angiography, tagged RBC scanning, celiac angiography, double balloon enteroscopy, or laparoscopic gastroduodenoscopy. Surgery remains the ultimate treatment for unstable gastric remnant bleeding with perforation. GI bleeding after RYGB presents a unique diagnostic challenge. Clinicians should have a high index of suspicion for a bleeding source in the excluded stomach, even years after the procedure.