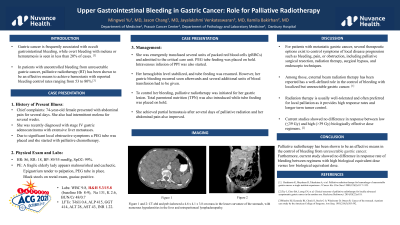 Introduction: Gastric cancer is frequently associated with occult gastrointestinal bleeding, while overt bleeding with melena or hematemesis is seen in less than 20% of cases. In patients with uncontrolled bleeding from unresectable gastric cancer, palliative radiotherapy (RT) has been shown to be an effective means to achieve hemostasis with reported bleeding control rates ranging from 53 to 80%.

Case Description/Methods: 74-year-old female presented with abdominal pain for several days. She also had intermittent melena for several weeks. She was recently diagnosed with stage IV gastric adenocarcinoma with extensive liver metastases. Initial blood tests revealed critical anemia with hemoglobin at 5.3 g/dL. She was emergently transfused several units of packed red blood cells (PRBCs) and admitted to the critical care unit. Intravenous infusions of proton-pump inhibitor was also started. A few days prior she had a G-tube placed because of continued melena with eating which was attributed to her primary gastric cancer lesion located in the gastric cardia. Her hemoglobin level stabilized and tube feeding was resumed. Her gastric bleeding recurred soon afterwards and several additional units of blood transfusion had to be given. Multiple attempts to reinstate tube feeding, including switching to bolus method, were unsuccessful as she developed recurrent bleeding on stomach irritation. To control her bleeding, palliative radiotherapy was initiated for her gastric lesion. Total parenteral nutrition (TPN) was also introduced while tube feeding was placed on hold. She achieved partial hemostasis after several days of palliative radiation and her abdominal pain also improved.