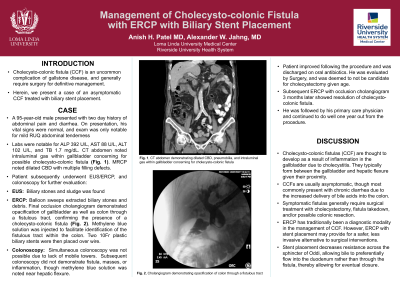 Introduction: Cholecysto-colonic fistula (CCF) is an uncommon complication of gallstone disease, and generally require surgery for definitive management. Herein, we present a case of an asymptomatic CCF treated with biliary stent placement.

EUS noted 2 cm CBD packed with stones and debris, which were subsequently removed during ERCP. Final occlusion cholangiogram demonstrated opacification of gallbladder as well as the colon through a fistulous tract, confirming presence of a cholecysto-colonic fistula. Methylene blue/contrast solution was then injected to facilitate identification of fistulous tract within the colon. After placement of two 10Fr plastic biliary stents, colonoscopy was subsequently performed. No fistulous opening was identified despite careful inspection, though methylene blue solution can be seen near hepatic flexure. Furthermore, no masses or inflammation was evident.

The patient improved following the procedure and was discharged on oral antibiotics. He was not a candidate for cholecystectomy given age. Subsequent ERCP with occlusion cholangiogram 3 months later showed resolution of cholecysto-colonic fistula. He was followed by his primary care doctor and was still doing well 1 year out.

Discussion: Cholecysto-colonic fistulas are thought to develop as a result of inflammation in the gallbladder due to cholecystitis. They typically form between the gallbladder and hepatic flexure given their proximity. CCF are usually asymptomatic, though most commonly present with chronic diarrhea due to the increased delivery of bile acids into the colon. Symptomatic fistulas generally require surgical treatment with cholecystectomy, fistula takedown or possible colonic resection. However, ERCP with stent placement or may provide a safer, less invasive alternative. Stent placement decreases resistance across the sphincter of Oddi, allowing bile to preferentially flow into the duodenum rather than through the fistula, allowing for eventual closure.