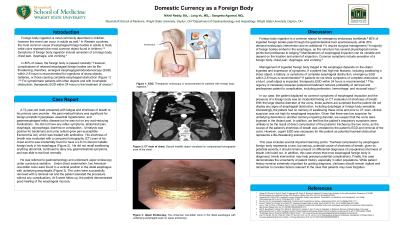 Case Description/Methods: A 72-year-old male presented with fatigue and shortness of breath. His past medical history included gastroesophageal reflux disease but he took no acid-reducing medications. His dyspnea was evaluated with a computed tomography scan of his chest and a 2.6 cm discoid metallic foreign body was incidentally found in his esophagus (Figure A). he did not recall swallowing anything abnormal and denied any gastrointestinal symptoms, including dysphagia and odynophagia. He was referred to gastroenterology and underwent upper endoscopy under conscious sedation. Under direct examination, two American one-dollar coins were found in vertical position in the distal esophagus with underlying esophagitis (Figure B). The coins were successfully removed with a retrieval net without any complications. At 6-week follow up, the patient demonstrated good healing of the esophageal mucosa.

Discussion: This patient presented with atypical symptoms of esophageal impaction, and the presence of a foreign body was an incidental discovery on imaging for dyspnea. the patient had no memory of swallowing these coins, so clinical suspicion was not high for esophageal impaction. he did not have any underlying dementia or memory impairment, so the coins may have been ingested in the distant past. Urgent EGD was necessary as tracheal obstruction can be a life threatening scenario.
Tracheal compression by esophageal foreign body represents a rare but serious potential cause of shortness of breath and should remain on differential diagnosis of unexplained dyspnea. Once esophageal foreign body is diagnosed, timely intervention may help preempt complications. Finally, there can be uncertainty in patient histories, especially in older population. Clinicians should remain vigilant and remember to consider relevant factors that patient may have forgotten when developing a diagnosis.

Figure: Coins as Foreign Bodies in the Esophagus