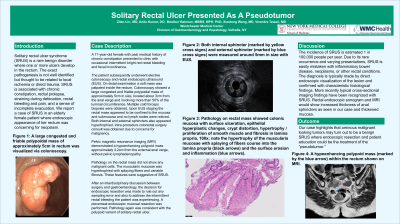 Introduction: Solitary rectal ulcer syndrome (SRUS) is a rare benign disorder where one or more ulcers develop in the rectum. The exact pathogenesis is not well identified but thought to be related to local ischemia or direct trauma. SRUS is associated with chronic constipation, rectal prolapse, straining during defecation, rectal bleeding and pain, and a sense of incomplete evacuation. We report a case of SRUS in an elderly female patient where endoscopic appearance of her rectum was concerning for neoplasm.

Case Description/Methods: A 71-year-old female with past medical history of chronic constipation presented to clinic with occasional intermittent bright red rectal bleeding and fecal incontinence. The patient subsequently underwent elective colonoscopy and rectal endoscopic ultrasound (EUS). On distal examination a soft mass was palpated inside the rectum. Colonoscopy showed a large congested and friable polypoidal mass of approximately 5 cm in size, located about 3 cm from the anal verge and involving more than 50% of the luminal circumference. Multiple cold forceps biopsies were obtained. Upon EUS staging the rectal mass appeared to be confined to the mucosa and submucosa and no lymph nodes were noticed. Both internal and external sphincters also appeared hypertrophied. Pelvic magnetic resonance imaging (MRI) findings were suspicious for SRUS. Pathology on the rectal mass did not show any malignant cells and features were consistent with SRUS. The muscularis mucosae was hypertrophied with splaying fibers, and the proliferated smooth muscles were accompanied by variable fibrosis.

Discussion: The incidence of SRUS is estimated 1 in 100,000 people per year. Due to its rare occurrence and varying presentations, SRUS is easily mistaken with inflammatory bowel disease, neoplasms, or other rectal conditions. The diagnosis is typically made by direct visualization of the lesion by colonoscopy, sigmoidoscopy, or endoscopy, and confirmed with histological findings. More recently typical cross-sectional imaging findings have been recognized with SRUS. Rectal endoscopic sonogram would show increased thickness of anal sphincters as seen in our case. MRI would illustrate thickened mucosa, even though this appearance is non-specific. Our case highlights that SRUS can masquerade as rectal pseudotumor. 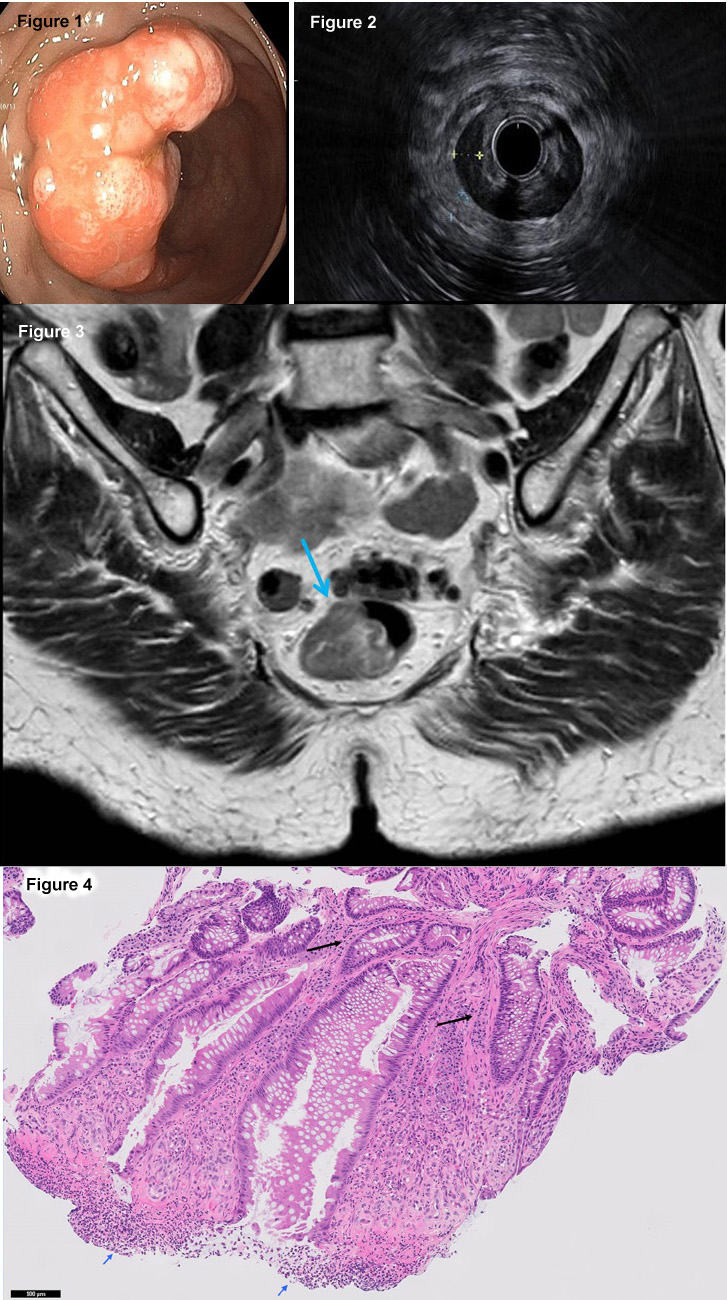 Figure: Figure 1: A large congested and friable polypoidal mass of approximately 5cm in rectum was visualized via colonoscopy.
Figure 2: Both internal sphincter (marked by yellow cross signs) and external sphincter (marked by blue cross signs) were measured around 5 mm in size with EUS.
Figure 3: A hypoenhancing polypoid mass (marked by the blue arrow) within the rectum shown on MRI.
Figure 4: Pathology on rectal mass showed colonic mucosa with surface ulceration, epithelial hyperplastic changes, crypt distortion, hypertrophy / proliferation of smooth muscle and fibrosis in lamina propria, 100x; note the hypertrophy of the muscularis mucosae with splaying of fibers course into the lamina propria (black arrows) and the surface erosion and inflammation (blue arrows).