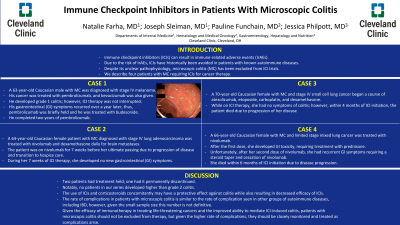 Introduction: Immune checkpoint inhibitors (ICIs) can result in immune-related adverse events (IrAEs). Thus, patients with pre-existing autoimmune diseases have been excluded from safety trials for ICIs. Despite its unclear pathophysiology, microscopic colitis (MC) has too been excluded from ICI trials. This case series describes four patients with MC requiring ICIs for cancer therapy.

A 63-year-old Caucasian male with MC was diagnosed with stage IV melanoma. His cancer was treated with pembrolizumab, and bevacizumab was also given. He developed grade 1 colitis; however, ICI therapy was not interrupted. His gastrointestinal (GI) symptoms recurred over a year later, thus, pembrolizumab was briefly held and he was treated with budesonide. He completed two years of pembrolizumab.

A 64-year-old Caucasian female patient with MC diagnosed with stage IV lung adenocarcinoma was treated with nivolumab and dexamethasone daily for brain metastases. The patient was on nivolumab for 7 weeks before her ultimate passing due to progression of disease and transition to hospice care. During her 7 weeks of ICI therapy, she developed no new gastrointestinal (GI) symptoms.

A 70-year-old Caucasian female with MC and stage IV small cell lung cancer began course of atezolizumab, etoposide, carboplatin, and dexamethasone. While on ICI therapy, she had no symptoms of colitis; however, within 4 months of ICI initiation, the patient died due to progression of her disease.

A 66-year-old Caucasian female with MC and limited stage mixed lung cancer was treated with nivolumab. After the first dose, she developed GI toxicity, requiring treatment with prednisone. Unfortunately, after her second dose of nivolumab, she had recurrent GI symptoms requiring a steroid taper and cessation of nivolumab. She died within 6 months of ICI initiation due to disease progression.

Discussion: Over half of patients with MC in our series developed a colitis flare requiring discontinuation of therapy. Notably, no patients developed higher than grade 2 colitis and only one required definitive discontinuation of therapy. The use of ICIs and corticosteroids concomitantly may have a protective effect against colitis while also resulting in decreased efficacy of ICIs. Given the efficacy of ICI therapy in treating life-threatening cancers and the ability to easily discontinue ICIs and therapeutically treat colitis flares, the benefits of trialing ICIs in patients with pre-existing MC may outweigh the risks.