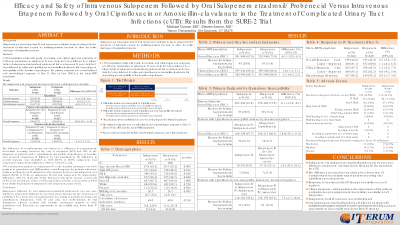 Background: Sulopenem is a broad-spectrum IV and oral penem antibiotic being developed for the treatment of infections caused by multidrug-resistant bacteria to allow for earlier discharge of hospitalized patients.

Methods: 1,395 hospitalized adults with pyuria, bacteriuria, and clinical signs and symptoms of cUTI were randomized to sulopenem IV once daily for 5 days followed by a bilayer tablet of sulopenem-etzadroxil and probenecid bid or ertapenem IV once daily for 5 days followed by either oral ciprofloxacin or amoxicillin-clavulanate bid, depending on susceptibility of the baseline uropathogen. The primary endpoint was overall (clinical and microbiologic) response at Day 21 [Test of Cure (TOC)] in the micro-MITT population.

Results: The sulopenem and ertapenem treatment arms were well-balanced at baseline.
The difference in overall response was driven by a difference in asymptomatic bacteriuria occurring between the end of treatment (EOT) and TOC in the subgroup of patients with a ciprofloxacin susceptible uropathogen at baseline who received ertapenem IV followed by oral ciprofloxacin. No difference in overall response was identified at EOT [86.7% vs 88.9%, sulopenem and ertapenem, respectively; difference, 95% CI: -2.2% (-6.5, 2.2)].
19% of patients remained on ertapenem IV as the baseline pathogen was both resistant to quinolones and ESBL positive; overall response for patients with these resistant pathogens on IV sulopenem who stepped down to oral sulopenem was higher [64/80 vs 55/84 on sulopenem IV/oral and ertapenem IV, respectively; difference, 95% CI: 14.5% (0.8, 27.8)].
Treatment emergent adverse events (all, 14.8% vs 16.1%; related, 6.0% vs 9.2%) and serious adverse events (2.0% vs 0.9%) were similar for patients on sulopenem and ertapenem, respectively.
Overall Response at Test of Cure, micro-MITT Population 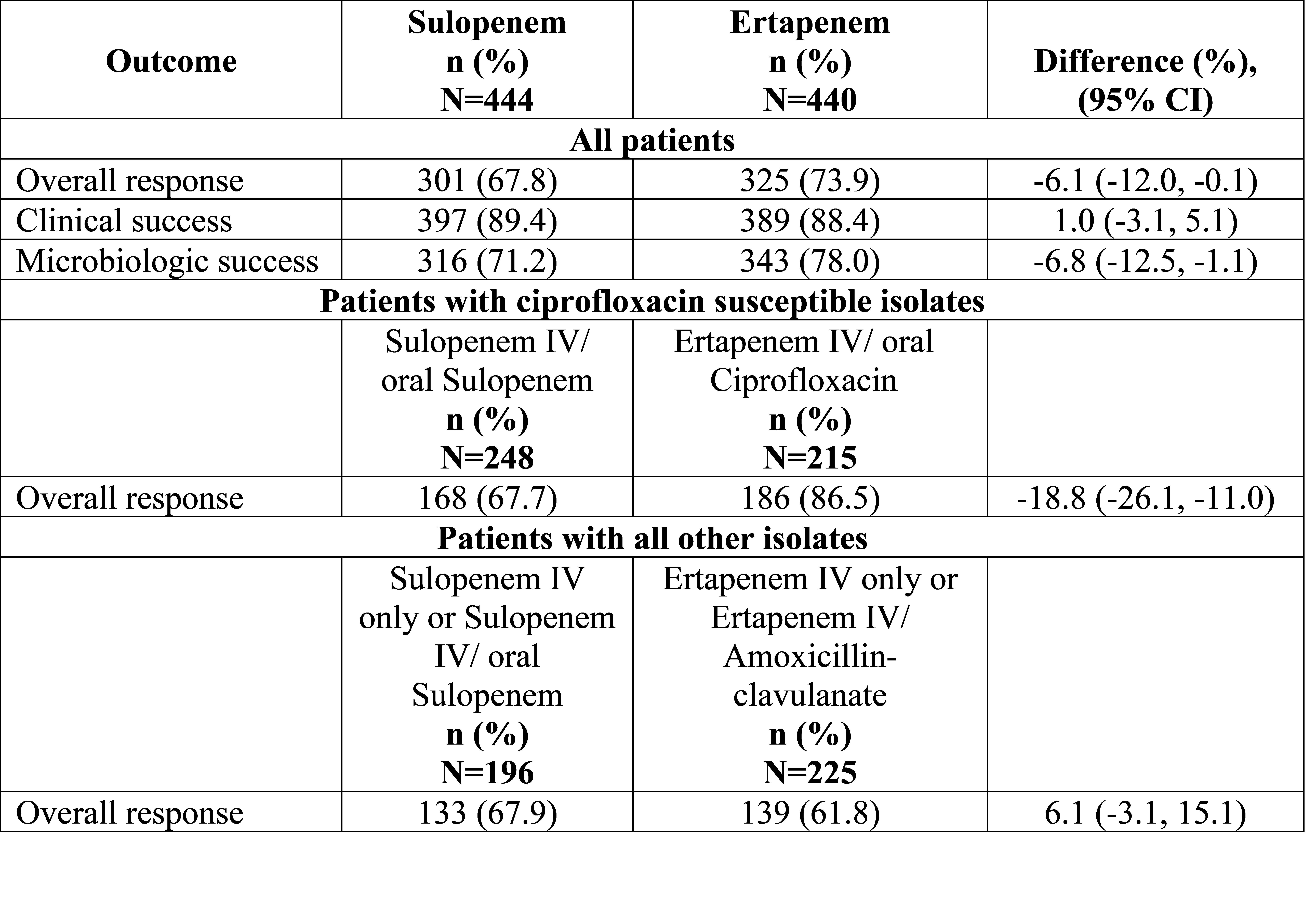 Conclusion: Sulopenem followed by oral sulopenem-etzadroxil probenecid was not non-inferior to ertapenem followed by oral step-down therapy for the treatment of cUTI driven by a lower rate of asymptomatic bacteriuria in patients receiving oral ciprofloxacin. Sulopenem, both IV and oral, was well‑tolerated; its oral formulation allowed patients with baseline pathogens resistant to both quinolones and β‑lactams an opportunity to successfully step down from IV therapy.