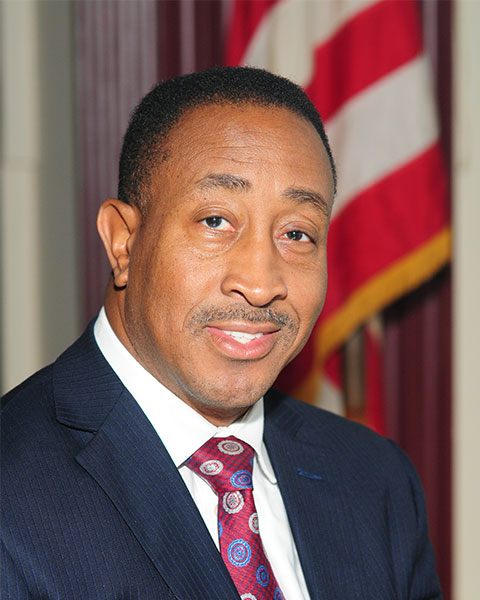 Ted R. Green was raised in East Orange, New Jersey and attended East Orange Public Schools. He graduated East Orange High School in 1981 and furthered his education by attending Cheyney University in Pennsylvania. He then attended Rutgers University where he received his certification as a Housing Counselor. Over the past 20+ years, he has distinguished himself as a professional in the field of property maintenance and housing revitalization. From 1990 until 1997, Ted Green served as the Assistant Compliance Officer for the City of East Orange. From 2002 until 2006, he was the Code Enforcement Officer for the City of Irvington Township’s Housing Division. In 2011, Ted Green graduated from Lincoln University and received his Master’s Degree in Human Services.

Mayor Ted R. Green has been active in East Orange political and civic affairs for over 25 years. On January 1, 2006, Ted Green was sworn in as a member of the East Orange City Council representing the Third Ward, where he served for three terms before being sworn in as Mayor of the City of East Orange on January 1, 2018 after an election that he won with an overwhelming 96% of the vote.

Mayor Green recognized in his early years the need for positive programs and activities for the youth in East Orange. In response to this need, in 1990, he founded the Green’s School of Martial Arts. Not only does he provide instruction in the discipline of martial arts, he also offers enrichment programs, mentoring programs and cultural activities. As an elected official, he has expanded his scope of involvement and has implemented community outreach initiatives and multiple pieces of legislation including banning the sale of look-alike toy guns, tax abatement assistance to East Orange residents, and allocating federal stimulus funding for training and apprenticeship programs, to name a few.

Mayor Green has received a plethora of citations, awards and accolades for his exemplary commitment and dedication to community service. Since day one of his mayoral term, Mayor Green has driven home the charge that East Orange is “One City, One Community, With One Goal and That Goal Equals Progress!”

Mayor Green is married to June Green and is the father of sons Eric Lamar and Salahuddin.