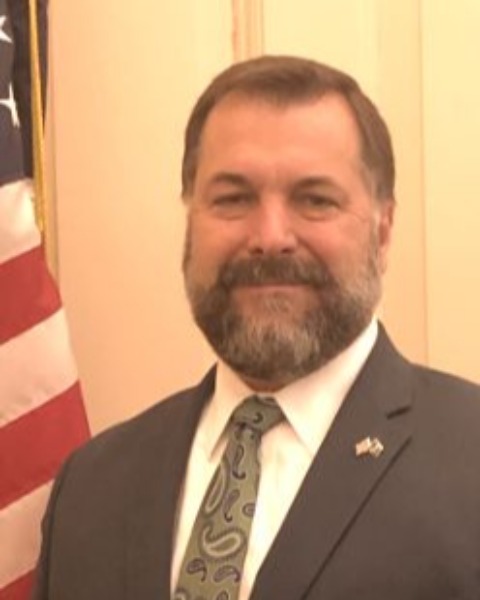 Democrat Joseph Danielsen, of Franklin Township, was first sworn into the New Jersey General Assembly on October 16, 2014, filling the unexpired term of Upendra J. Chivukula, who resigned to become a Commissioner on the State Board of Public Utilities.
Born March 1965, Mr. Danielsen received his Associate in Applied Science in Marketing Art and Design from Middlesex County College and his Bachelor of Arts in Visual Arts from Rutgers University. He served in the United States Army Reserve 78th Div. TNG (Jersey Lightning) for almost 10 years.
Mr. Danielsen is the founder and owner of Network Blade, LLC., a computer consulting service. He is currently a volunteer fire fighter, since 1992. In addition, Mr. Danielsen has served in many volunteer positions within the Township of Franklin, including the Planning Board for 14 years. He is also involved in fundraising for Childhood Cancer Research via St. Baldrick’s Foundation, Wounded Warrior and the LiveStrong foundations.
Mr. Danielsen is the youngest of nine children and was raised by a single parent. He now lives with his wife Christine and his three children, all of whom attend the Franklin Township public schools.

Mr. Danielsen represents the 17th Legislative District, which includes the Middlesex County municipalities of Milltown, New Brunswick, North Brunswick and Piscataway; and the Somerset County municipality of Franklin. Assemblyman Danielsen currently serves as Chair of the Oversight, Reform, and Federal Relations. He also serves as a member of the Financial Institutions and Insurance, and Military and Veterans’ Affairs Committees.
A life-long resident of Franklin Township, Joseph Danielsen, has served as Franklin Township Democratic Chairman for six years and Treasurer for two. During those eight years he has successfully maintained eight Council seats throughout numerous elections and was instrumental in growing the Committee to record levels. During his tenure he has been a prolific fundraiser throughout Somerset County for Democratic candidates. He was integral in creating an inter-local agreement between the township and the four Fire Districts that provided fire fighters during the day, which saved jobs and doubled the level of fire response to the taxpayers at a low cost.

For 14 years he served on the township Planning Board and served as its vice chair for several of those years. In that role, he consistently supported economic development and helped attract business to Franklin Township while maintaining the local character of historic Franklin Township. He focused on Public Safety and improved the level of safety and response for local volunteers.