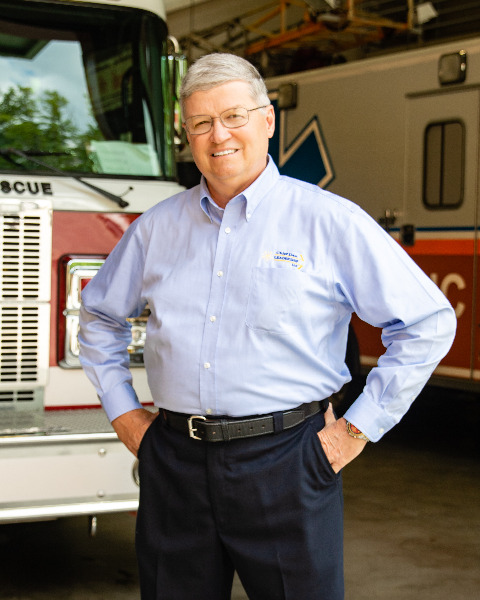 Dan Jones entered the fire service in February 1974 and rose through the ranks to retire as a Fire Chief in 2015. Jones served for over 16 years in the Pinellas Park, Florida Fire Department before relocating to Chapel Hill, North Carolina in 1990 to become Fire Chief. Upon his retirement, Jones was the longest serving municipal fire chief in the State of North Carolina.

Chief Jones has served on a variety of committees, councils and boards at the local, state and national levels. Jones is the former Editor-in-Chief of National Fire & Rescue Magazine and is a Past-President for the International Society of Fire Service Instructors. He is a special on-air commentator for CNN Headline News Network on breaking fire and rescue stories. He is a frequent emergency services conference speaker and is recognized throughout the fire service as an authority in the field of leadership, management, campus housing fire safety, fire sprinklers and motorsports fire-rescue. He is a guest lecturer at the University of North Carolina and has taught or presented in twenty-nine states, Canada, England, Germany, Botswana and Scotland. Jones is the recipient of numerous awards including Florida Fire Instructor of the Year, IAFC Presidents Award and North Carolina's highest civilian honor, The Order of the Long Leaf Pine.

Chief Jones attended St. Petersburg College, Alamance Community College, the National Fire Academy, the National Staff & Command program at the University of Maryland, and the Institute of Government at the University of North Carolina. Jones has held up to twelve emergency services technical certifications. He currently resides in Chapel Hill with his wife of 39 years in a home they built with fire sprinklers.