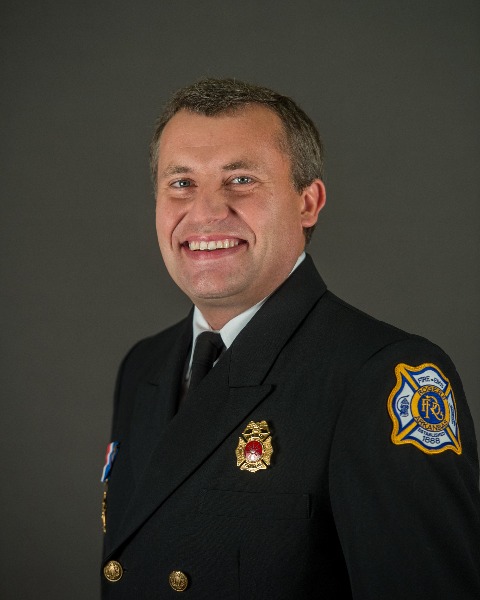 Tom Jenkins was appointed Fire Chief for the City of Rogers on January 16, 2009. Chief Jenkins is the eighth fire chief in the history of the City of Rogers Fire Department. In his current capacity he is responsible for over 140 career employees in ten locations. Under Tom’s leadership, the Rogers Fire Department has become accredited by the Center for Public Safety Excellence (since 2011), Commission on Accreditation of Ambulance Services (since 2012) and was awarded an Insurance Service Officer Public Protection Classification of one in 2015.
Chief Jenkins has severed as an appointee by the Governor of Arkansas to the Trauma Advisory Council, Firefighter Cancer Benefit Review Panel and the Safe Schools Commission. As a public safety advocate, Chief Jenkins has served as a professor for Northwest Arkansas Community College and Oklahoma State University teaching topics that range from leadership and administration to fire hydraulics and suppression tactics. In 2015, Chief Jenkins was elected to serve on the Board of Directors for the International Association of Fire Chiefs as the Second Vice President. In 2017, he was elected President and Chairman of the Board for the IAFC at Fire Rescue International in Charlotte, North Carolina and served on the board until 2019.
Tom is recognizable face at many fire and emergency medical conferences. Chief Jenkins has presented at more than 60 conferences in multiple states/countries, taught graduate-level courses at several colleges and universities, and helped to write and edit the 9th edition of the Fire and Emergency Service Self-Assessment Manual and the Nurturing Leadership through Mentoring Manual for the Center for Public Safety Excellence.
Chief Jenkins completed his Masters in Public Administration from the University of Oklahoma with an emphasis in Public Personnel Management and obtained his Bachelors degree in Fire Protection and Safety Engineering Technology from Oklahoma State University. He has completed the Executive Fire Officer Program at the National Fire Academy and is a designated Chief Fire Officer and Chief Emergency Medical Services Officer from the Commission on Public Credentialing. He currently serves on multiple boards and committees, including the: NFPA Standard on Organization and Deployment of Career Fire Departments Standard 1710, and the International Fire Service Training Association Board of Directors. He is married and has three young sons.