(287) Cognition and behavior in idiopathic/genetic epilepsies in children

Rationale: Cognitive impairments and behavioral disturbances are common among children with epilepsy. New discoveries of genetic associations have changed the perspective on classifying and treating epilepsies of genetic origin. The aim of the present study was to investigate the cognitive and behavioral profile of three distinct groups of epilepsy with a genetic background for intergroup differences: 1) idiopathic generalized epilepsies/generalized genetic epilepsies (IGE/GGE group), 2) idiopathic focal epilepsies (IFE group) and 3) epilepsies with proven or strongly monogenetic or structural chromosomal etiology (GE group).

Methods: Cognitive assessment was performed in a tertiary epilepsy center of Munich (Germany) using the WPSSI, WISC-IV, WISC-V and WIE according to the age of the patient and time of the procedure. IQ Subtests were assigned to four subcategories (non-verbal, verbal, processing speed and working memory). Behavior was assessed by assigning T-values to CBCL questionnaire scores. Data was collected in an Excel spreadsheet and then analyzed with SPSS v.26. We used ANOVA with post-hoc Bonferroni-correction to explore differences between epilepsy groups. The exact Fisher-Test tested for differences of the proportion of mildly intelligence impaired children and patients with pathological behavioral issues between epilepsy groups.

Conclusions: The present study highlights different cognitive profiles throughout epilepsies with a genetic background. Children with GE reveal lower IQs compared to patients with IGE/GGE and IFE. These findings help in further delineating epilepsies despite their closely related etiological classification with regards to their cognitive performance. “Genetic” as an etiological term varies strongly in its effects and outcomes. Therefore, upholding a difference between “true” genetic and idiopathic epilepsies within the group of genetic etiology helps optimizing treatment, counselling for patients and eliminating confusion when speaking about the effects of genetics on epilepsy outcome.

Funding: Please list any funding that was received in support of this abstract.: No funding was available for this study.
Click here to view image/table 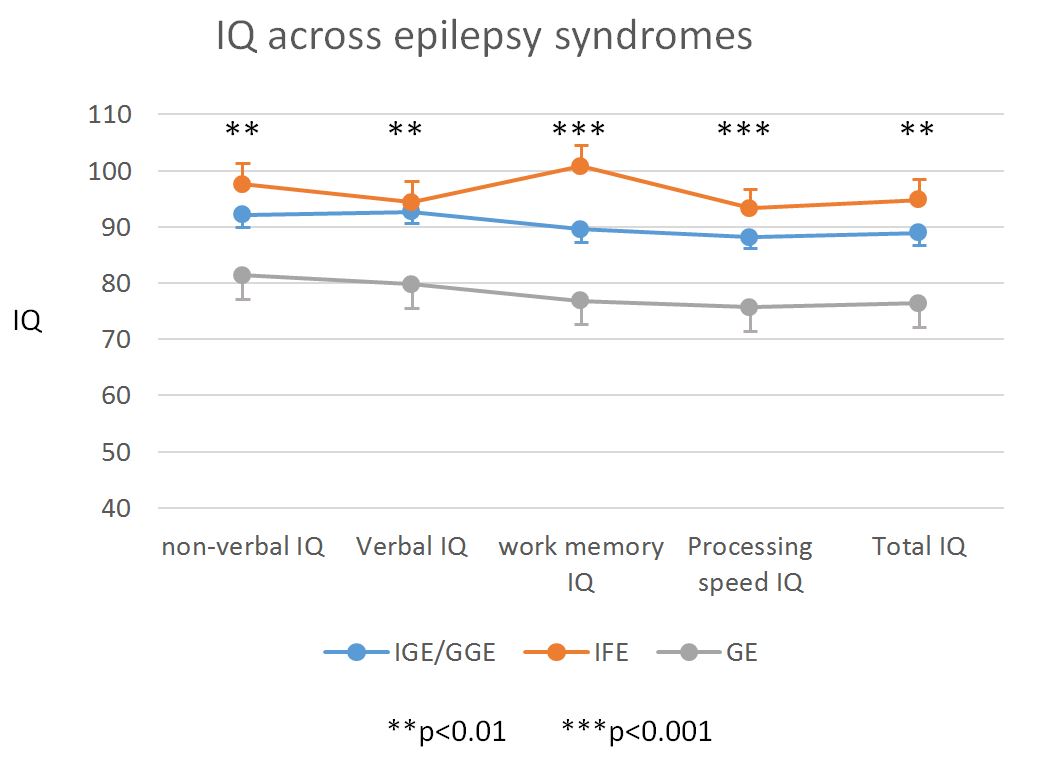