This abstract will be presented during the Neurophysiology Platform poster session

Rationale: After-discharges (ADs) have been considered delusive and unwanted byproducts of cortical stimulation, and harbingers of stimulation-induced seizures. Studies with small sample sizes concluded that ADs have no distinguishable inter-region/lobe differences in stimulation thresholds. In this study, we will assess the ADs obtained from a large data set and determine whether there is a region-dependent difference in the electrical stimulation thresholds for ADs.

Methods: We retrospectively analyzed functional mapping data from 83 patients (6-68 years old, 43 female) with focal epilepsy who underwent intracranial EEG studies. Biphasic square-wave and constant-current stimulation was delivered to the chosen pair of electrodes at 50 Hz with a 0.3-ms pulse duration for one to five seconds. The stimulation was initiated at 0.5 mA and increased by 0.5-1 mA increments for each subsequent stimulation until a positive response, an adverse event (i.e., ADs, aura, seizure, etc.), or 15 mA was attained. A positive response (PR) is defined as any observed behavior or patient-reported experience without accompanying electrographic changes. For all subjects, a post-operative CT was co-registered with a pre-operative MRI of the brain to obtain coordinates of each electrode. The electrode coordinates were normalized into MNI space on an averaged brain model to facilitate group-level comparisons. The averaged brain model was parcellated into 72 brain regions based on the DKT atlas in Freesurfer. A spatial efficiency metric was utilized to confirm that both PRs and ADs have similar spatial distribution within each parcellated region for further statistical analysis. Region-dependent comparisons of the stimulation thresholds for PRs and ADs were conducted at the group level using the Mann-Whitney U test.

Results: A total of 7,952 electrodes were implanted. Of those, 2,683 documented final stimulation results were collected. We analyzed the results (n=2,416) from surface electrode stimulation in this study. There were 66 (2.7%) seizure and 47 (2.0%) aura events captured. 365 (15.1%) episodes of ADs were observed during the mapping. And 955 (39.5%) stimulation elicited PRs. Brain regions related to language functions had significantly lower thresholds for ADs than for PRs, including right-side fusiform (p< 0.01) and superior temporal (p< 0.05) cortices, and left-side superior (p< 0.001) and middle (p< 0.05) temporal cortices.

Conclusions: In this study, we demonstrated that brain regions associated with language functions have significantly lower stimulation thresholds for ADs. We usually limit the maximum current setting at electrodes showing ADs to avoid seizure evocation, potentially yielding false-negative results in regions with lower AD thresholds. Moreover, ADs in these regions could easily spread to remote regions under excessive stimulations and activate a more extensive network. Hence, this could produce a confounding false-positive result. Therefore, one should interpret the mapping results cautiously when stimulating these regions with lower AD thresholds.

Funding: Please list any funding that was received in support of this abstract.: n/a 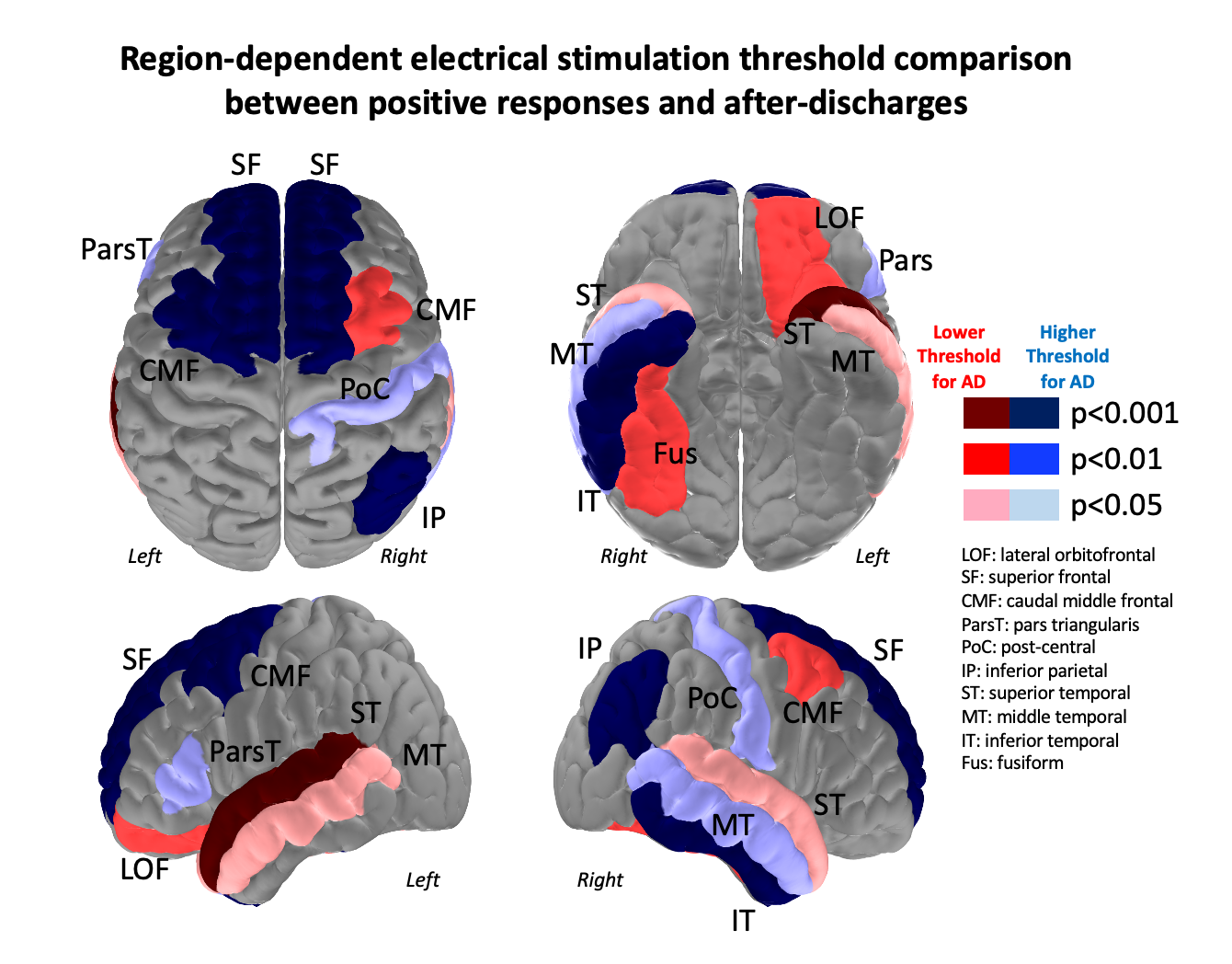