Rationale: The University of Washington Caregiver Stress Scale (UW-CSS) measures stress-related to caring for a child with epilepsy on caregivers. It was developed using qualitative methods with U.S. and international caregivers and contemporary psychometric methods and data collection from a large US sample of caregivers.. The purpose of this study was to translate the UW-CSS to German, Spanish, French and Italian and evaluate the validity of the translations.

Methods: The English version of the UW-CSS item bank was translated into German, French, Spanish, and Italian by translators who specialize in medical translations. One-on-one semi-structured interviews were conducted with caregivers of children (< 18 years) with epilepsy in each country to identify problematic translations, and corrections made if needed. The translated versions were then administered to caregivers of children with and without epilepsy in each country. DIF analyses were completed using the R2 change of 0.02 criterion in the R program lordif to examine potential bias by language and between individuals from the US and EU countries.

Results: Interviews were completed with 45 caregivers (German n=12; Spanish n=10; French n=13; Italian n=10) of children with Epilepsy, 76% (n=34) of whom were women. The scale was administered to 456 caregivers (Germany n=117, Spain n=114, France n=115, Italy n=110), the majority of whom were women (81%) and had a child with Epilepsy (55%). All translated items functioned well in all languages. However, three items displayed DIF by language and were removed from the original short form. The original English short forms were then modified slightly to ensure they function well in all languages. Modifications took into account the clinical importance of the item, item discrimination, and difficulty parameters. New six- and three-item short forms were developed. Reliability of the six-item short form is nearly identical to the original English eight-item short form and is highest ( >0.9) between -1.5 and +2 SDs around the mean. Reliability of the three-item short form is moderate ( >0.8) in this same range. Mean stress UW-CSS scores of caregivers of a child with epilepsy in the EU were significantly lower (Mean: 54.5) than U.S. caregivers of children with epilepsy (Mean: 62.8) but higher than EU caregivers of healthy children (Mean: 45.0).

Conclusions: New six- and three-item UW-CSS short forms are now available to all users in five languages. The translated versions are equivalent to the English version. The six-item short form is recommended for use in most situations. The three-item short form minimizes respondent burden and is appropriate for group level comparisons. All language versions are available at https://uwcorr.washington.edu/measures/.

Funding: Please list any funding that was received in support of this abstract.: Research reported was supported by a grant awarded to the University of Washington by Zogenix, Inc., under contract #ZXIIS2015-005. The sponsor played no role in study design, in the collection, and in analysis and interpretation of data, but co-authored the article based on the results. 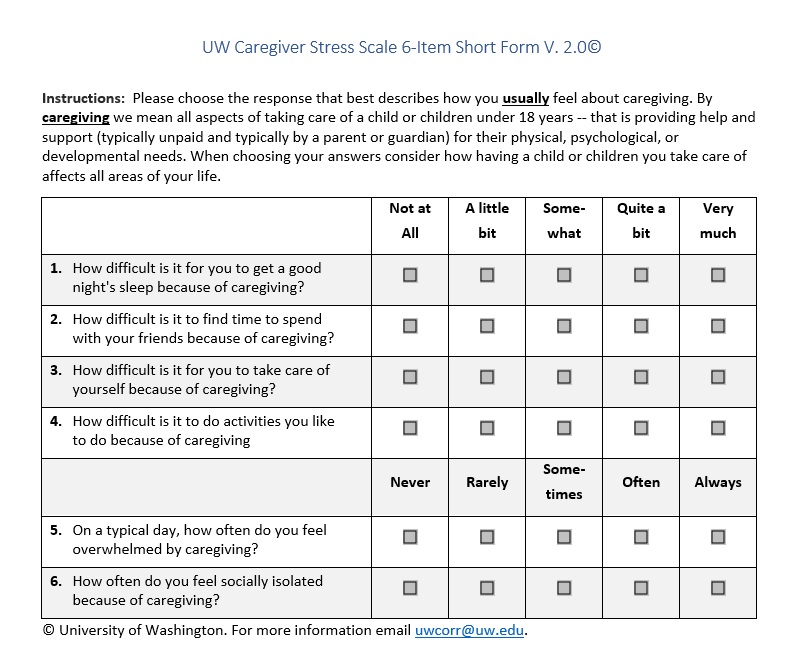