Localizing epileptogenic tissue for surgical resection often relies on brief moments of seizure occurrence during EEG monitoring. In efforts to better utilize information between seizures, interictal spikes (IIS) and their relevance to seizure onset zones have been studied, but the relationship between seizures and IIS is still not fully understood. This study seeks insight from patients with epileptic spasms (ES), since the brief, repetitive, and stereotypical nature of ES semiology facilitates repeated comparison of variable dynamics across IIS and ictal activity. Moreover, the potential developmental consequences of ES motivate an urgency to understand and leverage interictal data for treatment.

Ten children (1.9 to 3.6 years old) with a recent history of ES undergoing workup for resective epilepsy surgery were monitored with subdural EEG sampled at 1 kHz. Within retrospectively identified clusters of ictal fast waves (IFW) and interictal spiking periods ( >1 hour before/after clinical spasms or seizures), individual events were visually tagged at their approximate midpoints. Several IFW latencies were defined for each EEG channel by modification of line-length (LL) metrics within 6-second windows centered on IFW tags: LL within sliding windows trailing (tLL) and following (fLL) each time point were calculated, and IFW onset, peak, and offset were defined by local maxima of functions fLL–tLL, fLL+tLL, and tLL–fLL, respectively (Figure 1). IIS latency was defined for each channel by a function maximizing the product of average trailing/following slope and locally-baselined z-scores of amplitude within a one-second window centered on the IIS tag. An electrode’s “degree preference” (DP) was calculated as the difference between the count of earlier “upstream” and later “downstream” electrodes during an event, scaled such that DP = 100 for the first-detected channel and DP = -100 for the last.

Across IFW events, an electrode’s onset occurred within a mean range of 596ms (SD=364ms) and lasted for a mean duration (IFW offset – IFW onset) of 333ms (SD=153ms). Across IIS events, an electrode’s peak occurred within a shorter mean range of 119ms (SD=38ms). The temporal order in which electrodes showed activity varied more for IIS as compared to IFW: the average SD of each electrode’s DP across IFW metrics was 39, compared to 55 for IIS peaks (p < .001). Despite this variability in electrode order and timescale, combining patient electrodes involved in both IFW and IIS events revealed a modest positive relationship between an electrode’s average DP for IFW onset time and average DP for IIS peak time (r = .28, p < .001, Figure 2).

These results suggest a similarity between the propagation dynamics of IFW in epileptic spasms and corresponding IIS activity. Further studies will be needed to understand the anatomical and physiological underpinnings of such a relationship, how it may relate to differences in the timing and order variability of IFW and IIS, and how associations between interictal and ictal activity can improve surgical and clinical decision making.

Funding: Please list any funding that was received in support of this abstract.: This study was funded by grants from the National Institute of Health, R01-NS089659 to Dr. Jeong-Won Jeong and R01-NS064033 to Dr. Eishi Asano. 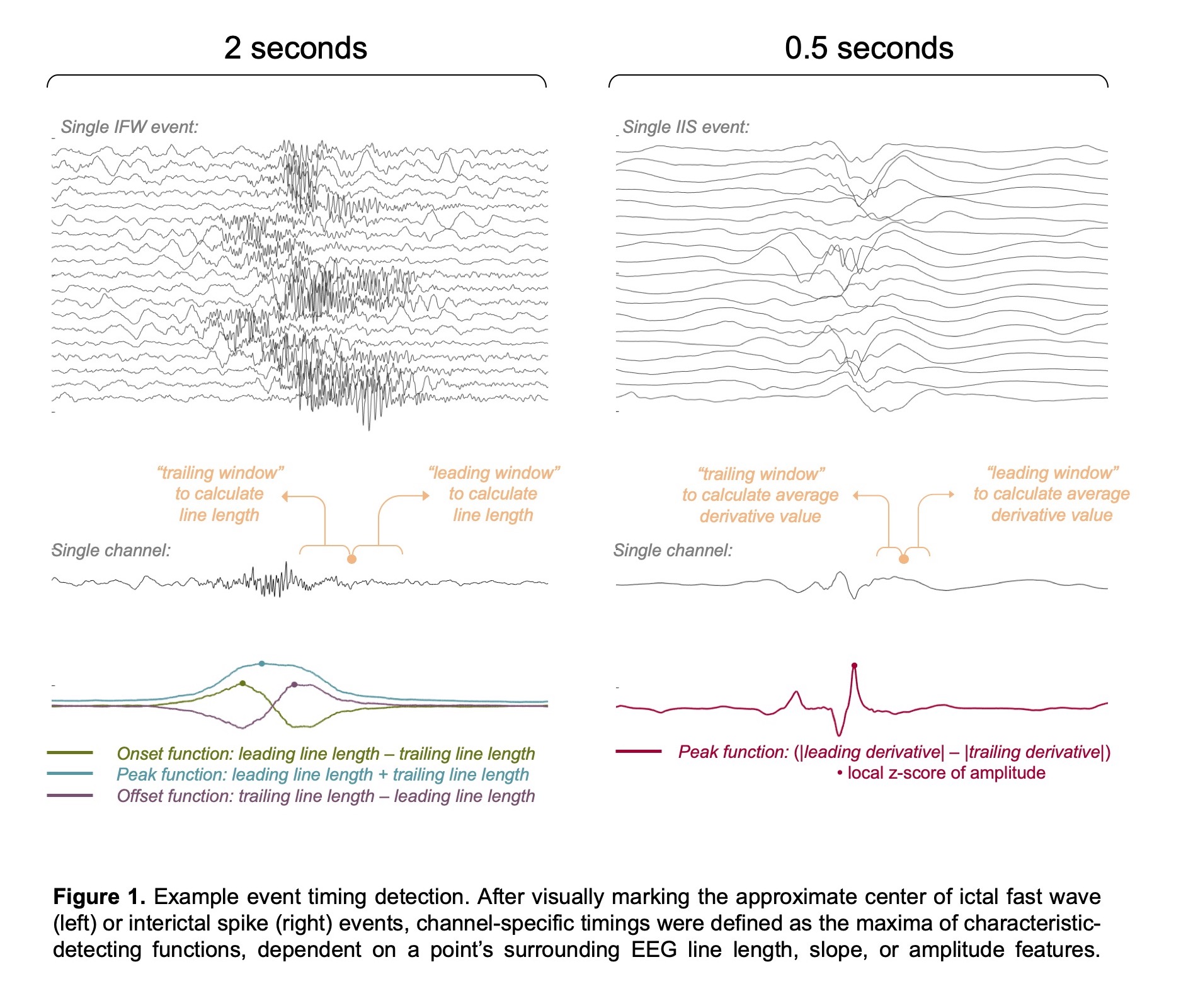 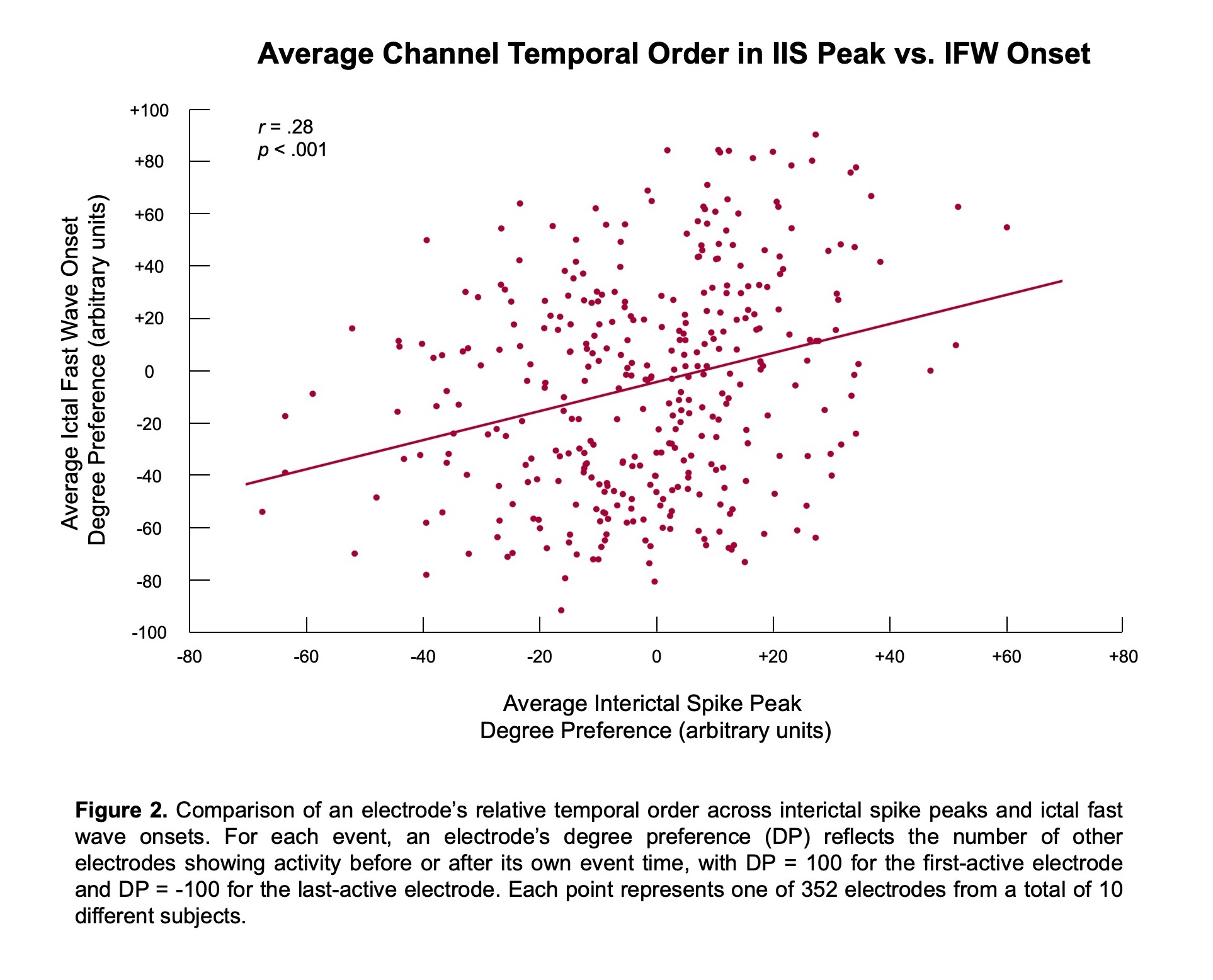