Rationale: Chronic focal epilepsy may cause cardiac electrical instability in the absence of underlying heart disease (Surges et al., Epilepsia, 2010). T wave alternans (TWA), a beat to beat fluctuation in the T wave amplitude of EKG, is considered an indicator of autonomic control on cardio-ventricular function (Libbus et al, Heart Rhythm, 2016) and predictive marker of heightened cardiac risk when ³ 47 µV (Pang et al, Neurology 2019, 2011). TWA values in this range have been observed post-ictally following secondary generalized seizures (Strzelczyk et al, Epilepsia, 2011). However, the effects of purely partial seizures, and the relation between seizure-related, and spontaneous (i.e., inter-ictal), behavior of TWA and HRV has not been fully characterized. Here we studied the partial seizures in a patient group with a secure diagnosis of left or right temporal lobe epilepsy (TLE) within an Epilepsy Monitoring Unit (EMU) environment over several days to characterize spontaneous and seizure related fluctuations in TWA.

Methods: Lead I EKG data were analyzed using customized code in MATLAB® from three patients each with right or left TLE (N=6; all right-handed). Epochs of three-minute duration separated by eight hours were selected from the multi-day EMU stay, in addition to three-minute segments immediately before and after any seizures, 30 minutes before and after any seizures, and for entirety of all seizures regardless of their duration. TWA was calculated in successive 16-heartbeat segments with the modified moving average (MMA) method (Nearing & Verrier, J Appl Physiol, 2002).

Results: The figure shows box and violin plots of the distribution of TWA values, with mean TWA and standard errors of the mean in black, with outlier values marked with red crosses. High values of TWA are seen in the post-ictal period in two of the right-hemispheric patients and in all three left-hemispheric patients (green arrows), in addition to several spontaneous (i.e., during baseline conditions of wakefulness and sleep) excursions to high values in all patients (red arrows), some ³ 47 µV.

Conclusions: Short-lived increases in TWA can be seen following partial seizures in temporal lobe epilepsy. Spontaneous, seizure-independent, increases in TWA also occur in patients with both right and left-sided TLE. The relevance of these findings to TWA increases following secondarily generalized seizures in a larger patient group is the subject of ongoing investigation.

Funding: Please list any funding that was received in support of this abstract.: This work was supported by the Wilder Family endowments to the University of Florida 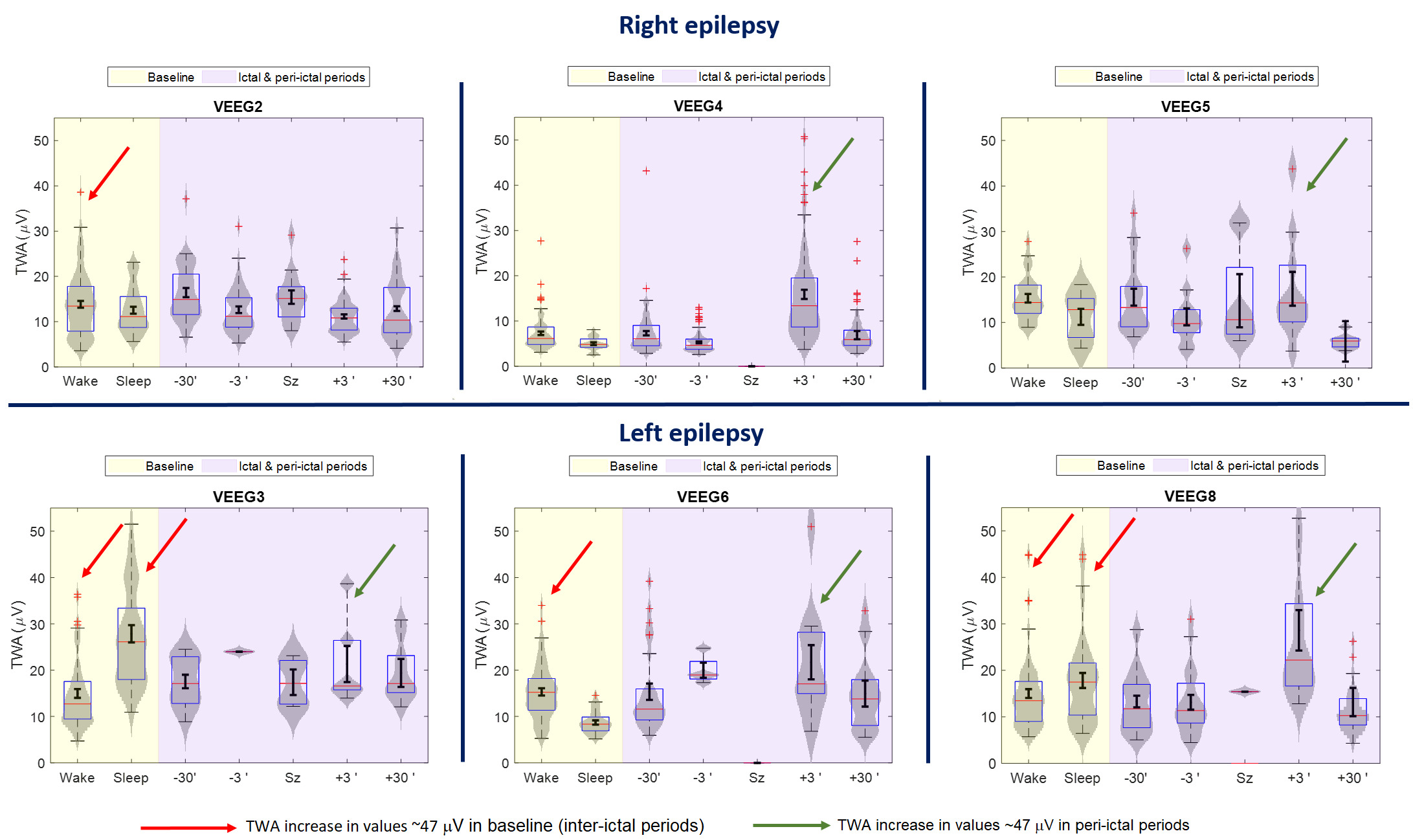