Rationale: Cerebral malaria (CM) affects half a million children annually, with 10-20% of survivors developing epilepsy within two years, contributing significantly to the epilepsy burden in the developing world, where CM is endemic. Identification of markers for epilepsy development risk following acute CM infection would improve clinical management in these resource limited regions. In an analysis of EEGs obtained during acute CM infection, we investigated the utility of early EEG measures and clinical metrics for predicting post-CM epilepsy.

Methods: We analyzed EEGs obtained from the Blantyre Malaria Project Epilepsy Study (BMPES) 2005-2007 for this study. BMPES was a prospective cohort study of neurologic outcomes in pediatric CM survivors. As part of this study, 20-30 minute EEGs were obtained within 24 hours of admission to hospital on comatose pediatric CM patients. We performed both spectral and conventional analysis of these EEGs, with comparison of mean power of band frequencies, as well as visual analysis for presence of abnormal EEG features including the presence or absence of the following: state change, focal/diffuse slowing, focal/multifocal/generalized spikes, and focal/generalized seizures. We then assessed the relationship between EEG findings and the development of epilepsy within a two-year period.

Results: Demographic and initial clinical data are shown in Table 1. Out of 71 subjects, 10 developed epilepsy. Overall, at least one abnormality was noted in each study. There were no significant differences in the findings of conventional EEG analysis between CM survivors with and without epilepsy. Spectral EEG analyses revealed a significant difference in gamma-delta power ratios amongst the children who ultimately developed post-CM epilepsy compared to those who did not, 0.227 ± 0.10 vs. 0.155 ± 0.06 (p = 0.002). A logistic-regression analysis found relative gamma power (p = 0.003) and maximum temperature on first day of admission (p = 0.028) were significant and independent post-CM epilepsy predictors, with an area under the ROC of 0.854.

Conclusions: Our results indicate that early EEG frequency content during acute CM presentation is associated with post-CM epilepsy in children. In particular, the early enhancement of gamma activity corresponds to data from animal acquired epilepsy models, where an acute increase in gamma activity during an epileptogenic insult corresponds to pathologic activation and excitotoxic injury of fast-spiking inhibitory interneurons. Surprisingly, we found there was less delta activity among patients who later developed epilepsy; however, a mechanistic explanation for this finding is not apparent and will be the subject of future studies. Identification of predictive risk factors for post-CM epilepsy has important implications for risk stratification in regions with high epilepsy burden and resource constraints. The ability to identify patients in whom epileptogenesis has been triggered may also facilitate rational trials of an intervention to prevent epilepsy among those at highest risk.

Funding: Please list any funding that was received in support of this abstract.: This research was conducted without any funding support. 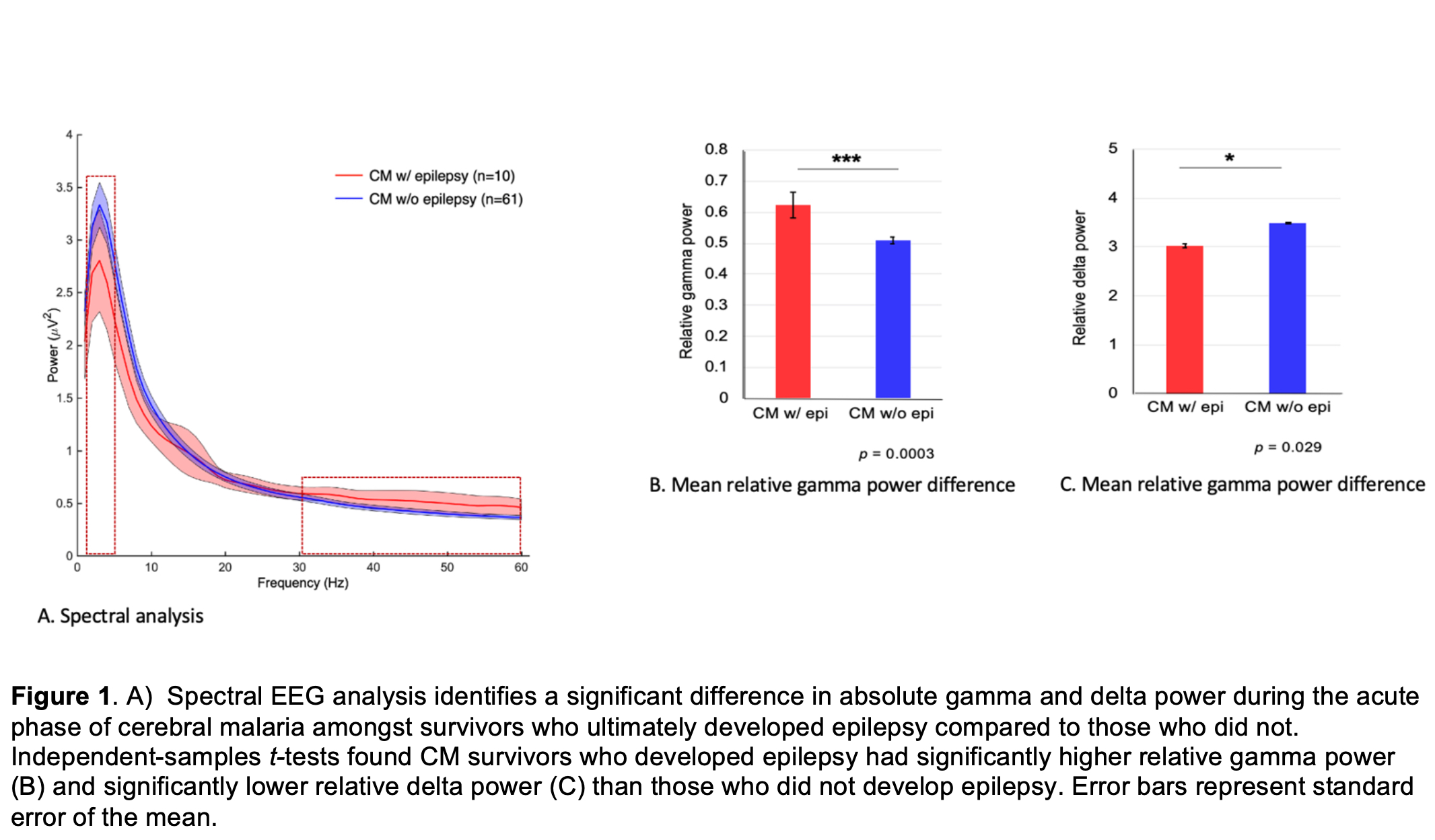