Rationale: Infantile spasms (IS) is characterized by epileptic spasms, hypsarrhythmia (including variants thereof), and neurodevelopmental impairment. With the observation that interictal paroxysmal fast activity (PFA) seems to be a common feature in children with infantile spasms, we set out to evaluate a  computational method to identify and quantify PFA in an unbiased fashion, and use these PFA measures to predict and measure response to treatment for infantile spasms.

Methods: We identified 50 patients with IS, with (1) baseline overnight EEG, (2) subsequent treatment with a first-line therapy (prednisolone, ACTH, or vigabatrin), and (3) follow-up overnight EEG within one month. Thereafter, each pre- and post-treatment EEG was sampled four times (two awake, two sleep) with specific samples selected using a randomization algorithm to mitigate sample selection bias. Artifactual EEG was then excluded using a fully-automated, principal components analysis-based algorithm. Thereafter, we calculated the strength of cross-frequency coupling between gamma (35-70 Hz) and delta (3-4 Hz) activity measured as the modulation index (MI) in wakefulness and sleep for each patient, before and after treatment. MI for each EEG sample was determined using the mean MI across all EEG channels and MI for each assessment (before or after treatment) was defined as the mean of the two samples (awake or asleep). We then contrasted awake and sleep MI between responders (resolution of epileptic spasms without relapse over the next 28 days) and non-responders (all others).

Conclusions: This study suggests that post-treatment MI is a reliable indicator of short-term response to treatment for infantile spasms, and that baseline MI may predict response. Further study is needed to validate these findings and evaluate this novel EEG metric against other clinical and computational EEG measures.

Funding: Please list any funding that was received in support of this abstract.: This study was accomplished with support from the Susan S. Spencer Clinical Research Training Scholarship from the American Academy of Neurology, the Pediatric Victory Foundation, the Sudha Neelakantan & Venky Harinarayan Charitable Fund, the Elsie and Isaac Fogelman Endowment, the Mohammed F. Alibrahim Endowment, the Hughes Family Foundation, the John C. Hench Foundation, the UCLA Children’s Discovery and Innovation Institute, and UCB Biopharma. 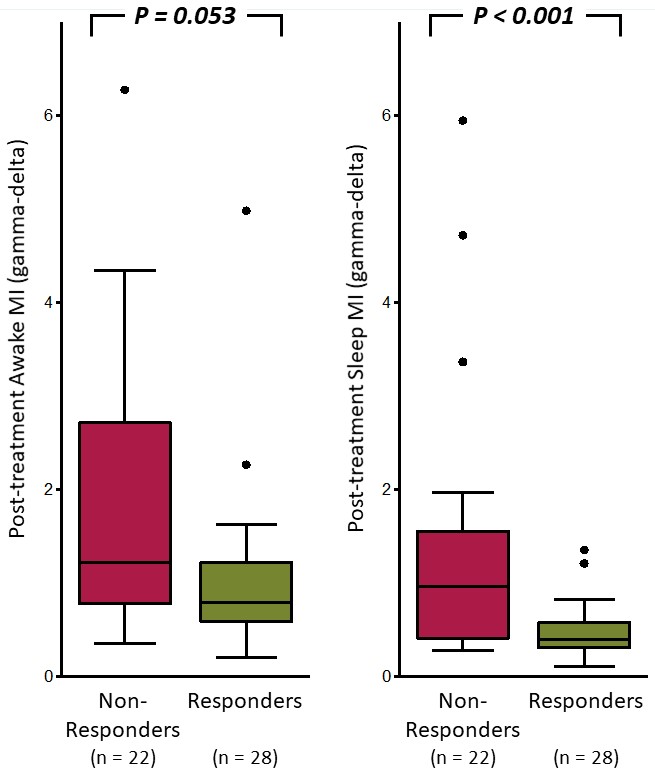