Rationale: Surgical resection is standard of care for medically refractory temporal lobe epilepsy. MRI-negative temporal lobe epilepsy (mnTLE) is a complex clinical entity due to the diagnostic challenges of localizing an epileptic focus without clear imaging evidence of an abnormality. Studies show that rates of seizure-freedom are lower in mnTLE compared to TLE with hippocampal sclerosis. Patients and physicians often worry about the cognitive effects of surgery for TLE, and may avoid effective treatment of epilepsy due to these reservations about cognitive collateral damage. Concerns about cognitive effects of surgery may be compounded in mnTLE because of doubts regarding the efficacy of surgery, in addition to perceived risks of negative cognitive outcomes. This study addresses quantifiable cognitive measures of language, memory and processing speed to describe neuropsychological outcomes of surgery for MRI-negative TLE.

Methods: A cohort of 31 prospectively identified MRI-negative TLE patients who went on to have surgery with at least one year of follow up were the focus of this study. Patients were evaluated using several neuropsychological batteries leading up to surgery. Test of language, memory and processing speed were carried out using the Boston Naming Test (BNT), California Verbal Learning Test (CVLT), and Trail Making Test (TMT) respectively. Neuropsychological outcomes were compared across two time points: pre- and post-surgery. The average time from surgery to post op neuropsychological testing was 1.6 years. Patients scores were compared pre and post operatively over the entire cohort and then by laterality. Standard anterior temporal lobectomy with hippocampectomy was the most common surgery used in these patients.


Conclusions: Overall, processing speed improves after surgery for MRI-negative TLE, language shows no significant change and verbal memory shows a decline. Increases in processing speed and language function were observed mostly in right-sided (non-dominant) surgery, while there were decreases in memory function observed after left (dominant) sided resections. The effects surgery for mnTLE on cognition are complex, but appear to have cognitive benefits that offset or even outweigh deficits that may be incurred, especially for non-dominant hemisphere resections.

Funding: Please list any funding that was received in support of this abstract.: N/A 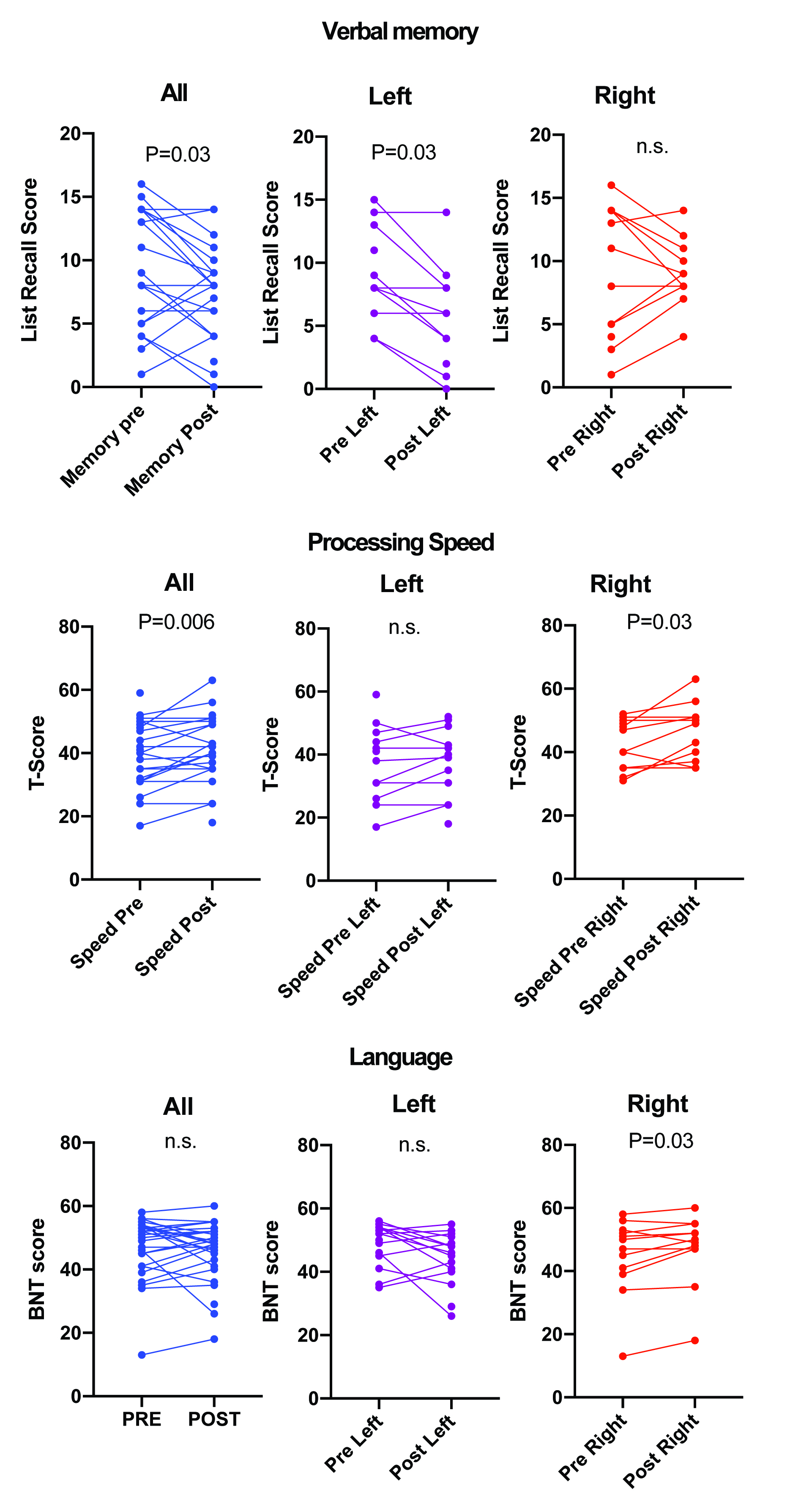