Rationale: Neurocutaneous disorders may present with a wide range of epilepsy severity. Patients who experience epilepsy as part of the disorder in childhood may not have full understanding of the spectrum of their syndrome upon re-presentation to adult epilepsy clinics. Adult neurologists must consider these disorders in patients with refractory epilepsy to appropriately guide treatment. We present a case of a patient with Parry-Romberg syndrome (PRS) with en coup de sabre (ECDS) who had seizure recrudescence as a young adult.

Methods: The patient is a 22-year-old female who had onset of focal to bilateral epilepsy with generalized convulsions at age five. EEG found focal discharges from the left frontal lobe with temporoparietal spread followed by generalization. She underwent evaluation and a mass in the left frontal region was subsequently resected following trials of two AEDs. Following this, she was seizure free for seven years, at least four of which were off medication. In 2017 she suffered a generalized convulsion and has had annual seizures despite escalation of monotherapy with lamotrigine. Imaging revealed left mesial structural abnormality in the surgical bed with increased vascularity and the patient was referred for surgical treatment (see Image 1).
On review of history, the patient was noted to have a linear scleroderma overlying her left forehead which had been treated for years with methotrexate (MTX). This lesion had stabilized, and MTX tapered prior to recrudescence of seizures. On exam, a mild sunken appearance of the frontal bone was noted. Repeat 5 day EEG showed L frontal interictals, but no seizures were captured.

Pathology review was noted to be consistent with vasculitis, a finding of secondary changes of ECDS of the central nervous system. She was ultimately diagnosed with epilepsy due to PRS with ECDS.

Results: Diagnosis of ECDS/PRS may confer potential for progressive epilepsy. While we consider potential resective extension of her lesion, the potential for an inflammatory process to incite ongoing seizures will remain. Understanding this potential may alter decision to proceed for epilepsy surgery in favor of immunosuppressive therapy, especially when resection may confer further disability in patients. 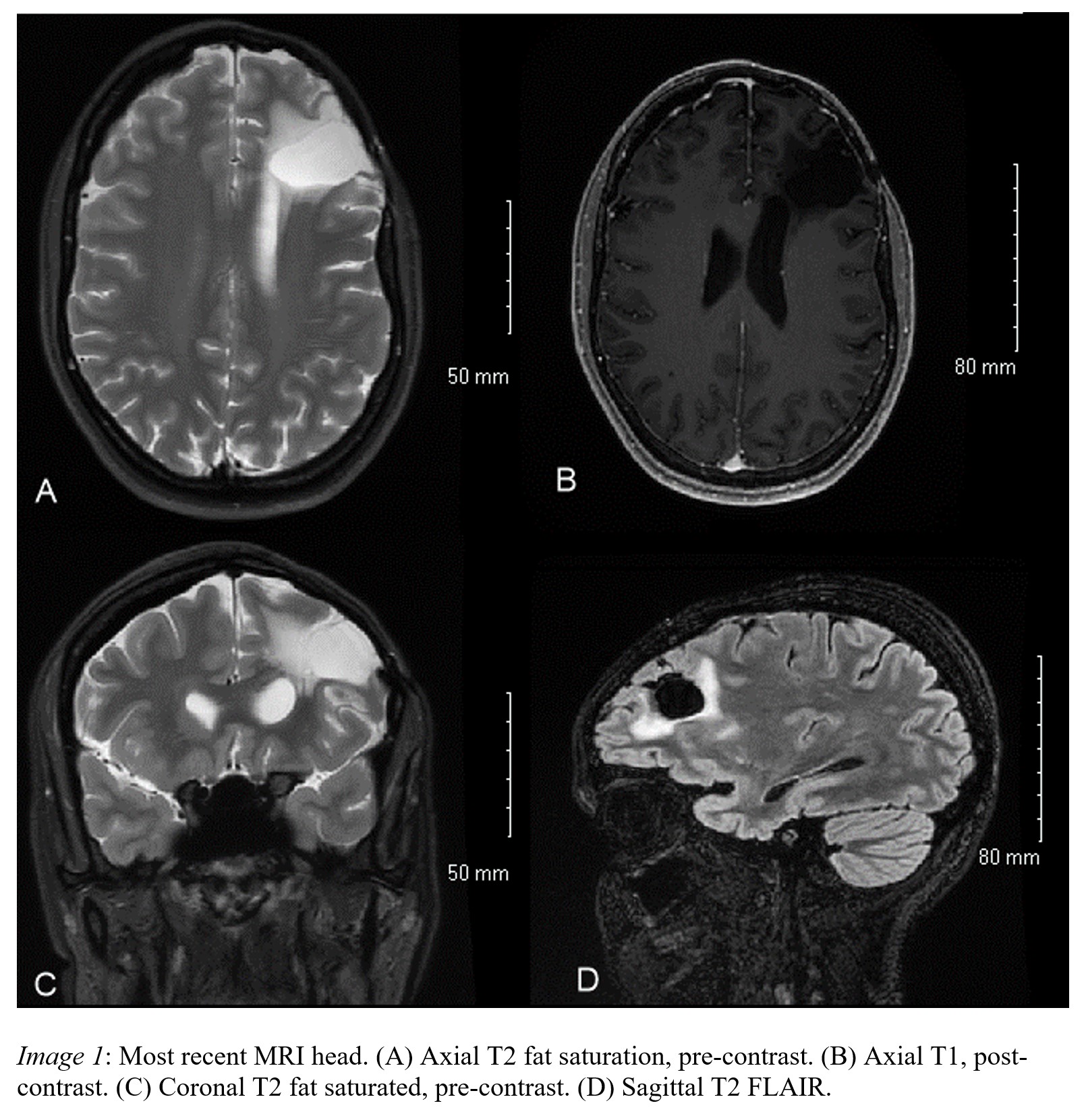