Rationale: A wide range of periictal autonomic dysregulations can occur along with epileptic seizures, including modulation of the gastrointestinal, cardiac, respiratory functions, and significant hemodynamic (blood pressure) changes. The occurrence of postictal hypotension (PIH) has been described in a few studies and labeled as a potential biomarker of SUDEP. However, little is still known about seizure-related alterations of the cardiovascular indices and its relation with other autonomic modalities. Herein, we assessed alterations of nine autonomic features in three phases of a seizure (pre-ictal, ictal, and postictal) to gain a profound and multi-dimensional insight into the pathomechanisms of SUDEP and possible premortem identification of patients most at risk of it.

Results: Out of 811 consecutive patients with epilepsy, 15 patients (15 GCSs) fulfilled the inclusion criteria and included in the study. Three patients (20%) developed PIH (MAP< 65 mmHg); two patients (13%) developed wide pulse pressure (concurrent increment in SBP and decrement in DBP) in postictal phase, while ten remaining cases had 54% increment in MAP at the end of the seizure when compared to baseline (from 99.1±9.5 to 152.8±59), and gradually returned to baseline in 20 minutes.
Those three subjects with PIH, showed a unique prodromal pattern of pre-ictal decreased blood pressure, whereas other cases did not (Figure 1).
Changes of cardiac indices, including CO, SV, and TPR, were concordant with alterations of blood pressures in all stages of the seizures (Figure 2).
Breathing evaluations showed a longer duration of hypoxia and lower oxygen saturation levels in cases with PIH; however, there was no statistical significance when compared to the other subjects (P=0.68). Also, we found one postictal central apnea (Figure 2) among these three cases, which was accompanied by the lowest level of oxygen saturation (O2 Sat=23%).
Patients with PIH tended to have a reduced BRS value compared to the rest of the cases at the postictal phase. Nonetheless, no statistical significance was found (P=0.31).

Conclusions: Periictal modifications of cardiovascular indices display distinct patterns. Pre-ictal change in blood pressure might be a potential predictive event for the autonomic changes in the postictal phase. Multimodal evaluation of autonomic features is a promising approach for the possible premortem identification of patients most at risk of SUDEP. Conduction of larger studies is needed for further justification of possible relationships among autonomic indices and making robust clinical recommendations.


Funding: Please list any funding that was received in support of this abstract.: National Institute of Neurological Disorders and Stroke (NINDS) Center for SUDEP Research’s Autonomic and Imaging Biomarkers of SUDEP multicenter project (U01-NS090407). 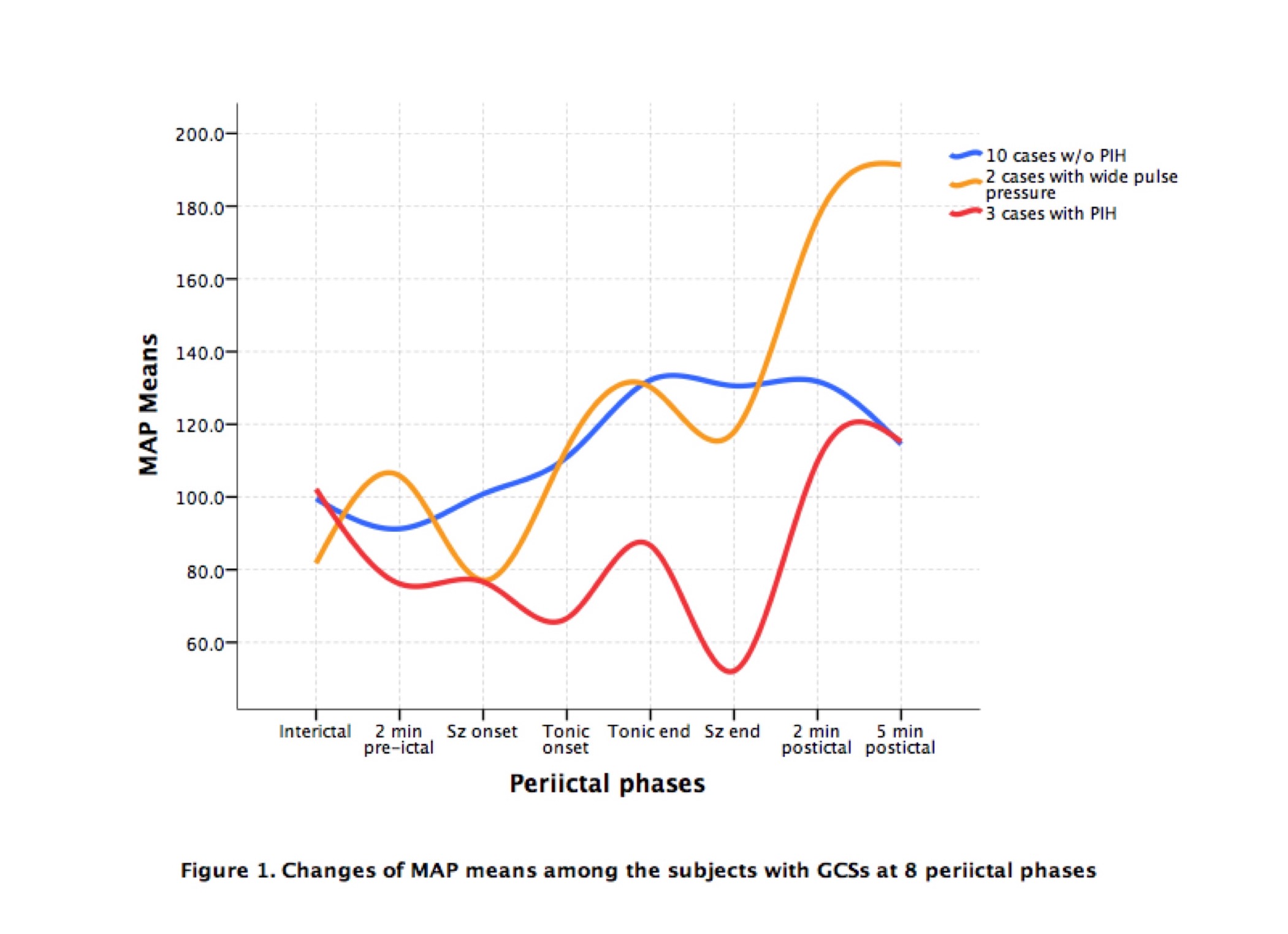 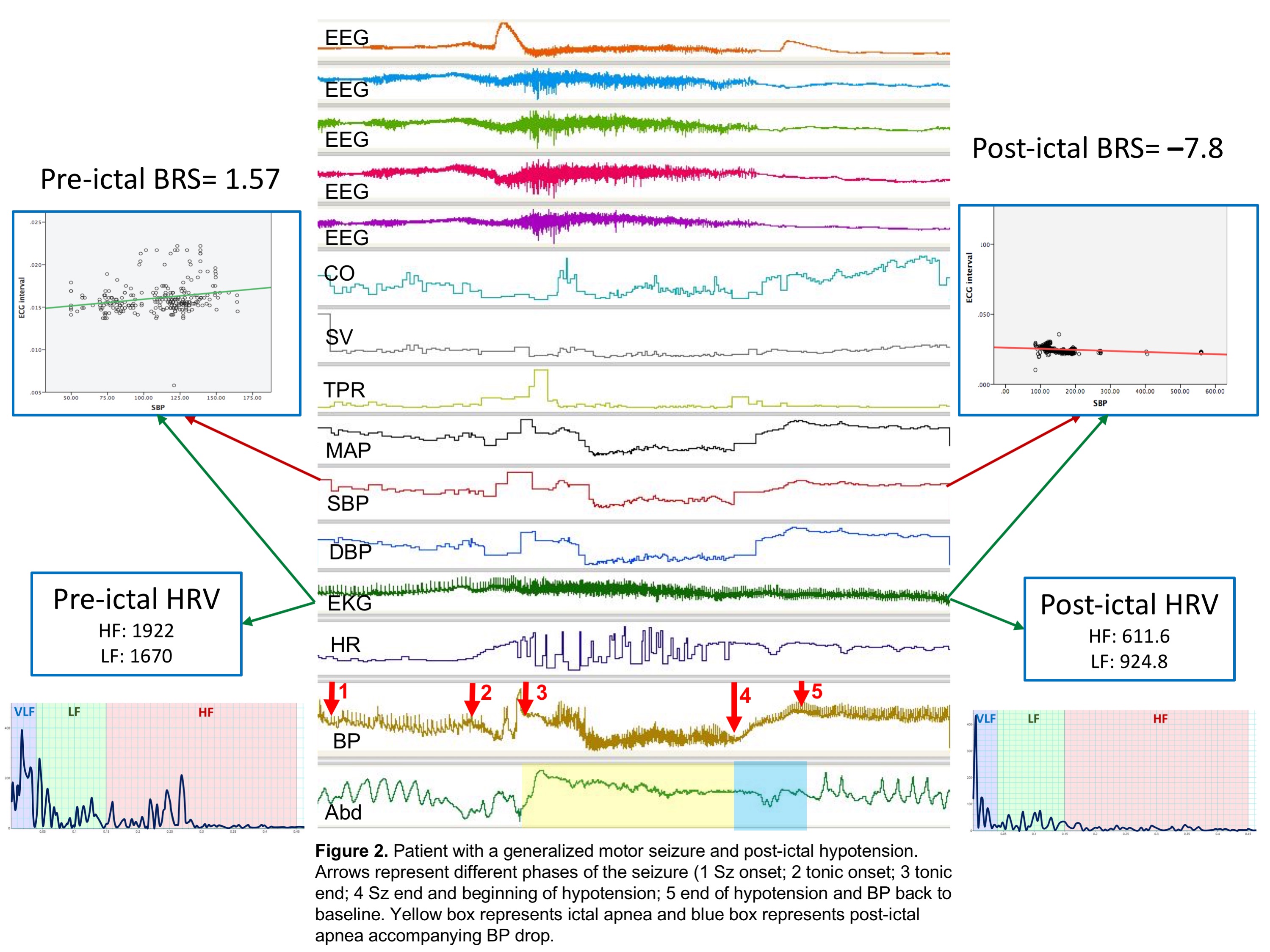