Rationale: Epilepsy is one of the most common and disabling neurological conditions affecting 1-2% of the world’s population. Epileptic patients are at more risk of cognitive dysfunction with detrimental effects on neural processing and memory. An evaluation of inherent neural processing was performed using auditory event related potentials (ERP) in rats before and after induction of status epilepticus (SE) using the Lithium-Pilocarpine model (LP). The aim of this study was to evaluate changes of neural function during epileptogenesis where rats appear to lose their ability to habituate to repeated auditory stimuli suggesting dysfunction in the excitatory:inhibitory neural system, as well as epileptic rodents showing a decline in associative memory.

Methods: Adult male Sprague-Dawley rats (N=6) were stereotaxically implanted with eight intracranial tungsten electrodes (125-µm diameter) bilaterally in the frontal and parietal cortex, the hippocampus (CA1), and thalamus (CM). Habituation and mismatch negativity (MMN) auditory ERP tasks were performed for all rats prior to induction to SE to serve as controls. SE was then induced for each rat using the standard LP model (LiCl-3mmol/kg 24 hrs prior to 30 mg/kg pilocarpine), and were treated with diazepam and phenobarbital ~3hrs into SE to aid in survival. Each rat was recorded for both ERP tasks: one week before SE, one week after SE, one month after SE, and two months after SE. The habituation task was delivered over 500 trials consisting of four Gaussian white noise pulses (50-ms duration) separated by 500-ms, with a period of 4-sec between trials. The MMN task was performed over 500 trials in a randomized presentation of 45-ms tones with a 4:1 ratio for the regular (1kHz) and odd (2kHz) tones respectively separated by 2-sec.

Results: Habituation ERP responses were quantified by the average N70 (70ms peak in the ERP) over the trials and then normalizing the N70 onset from 1st for the 2nd, 3rd, and 4th N70 peaks (Figure 1). The N70 peak increases during epileptogensis from one week, one month, two months in subsequent peaks (Friedman’s p< 0.05) indicating an imbalance of excitatory:inhibitory function since dampening in repeated sound pulses in diminished. MMN ERP responses were evaluated by taking the area under the curve (AUC) from 250-350ms beyond the initial tone for each of the regular and odd tones (Figure 2). A large AUC means the odd tone is distinguished from the regular tone and represents associative memory. From Figure 2, during epileptogenesis rats lose their ability to distinguish the odd and regular tones.

Conclusions: Auditory ERP’s are simple non-invasive tasks that are useful in evaluating neural systems for those suffering from epilepsy. From our study, we have shown that there are clear imbalances in excitatory:inhibitory function using a very simple method of habituation, as well as some indication that associative memory in rodents is affected. These simple non-invasive tasks could easily be implemented in patients to see if these also exist in epileptic patients which may help with cognitive treatment.

Funding: Please list any funding that was received in support of this abstract.: NSF: EPSCoR RII-2 FEC OIA1632891 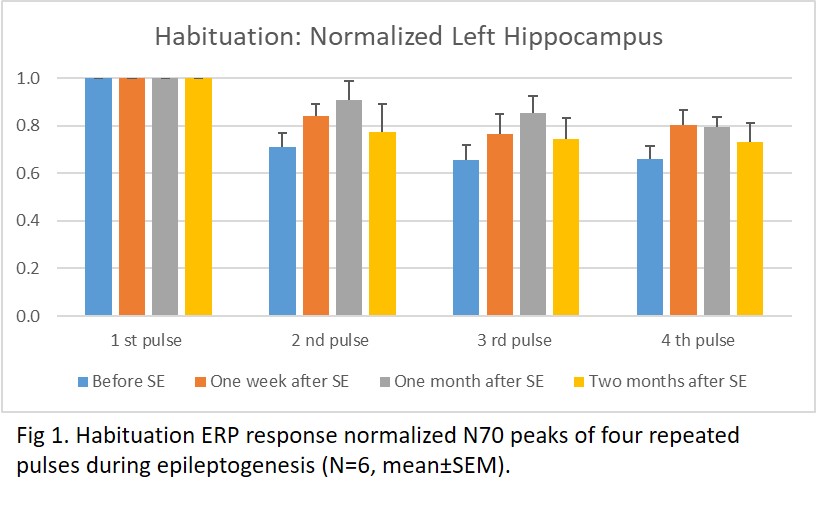 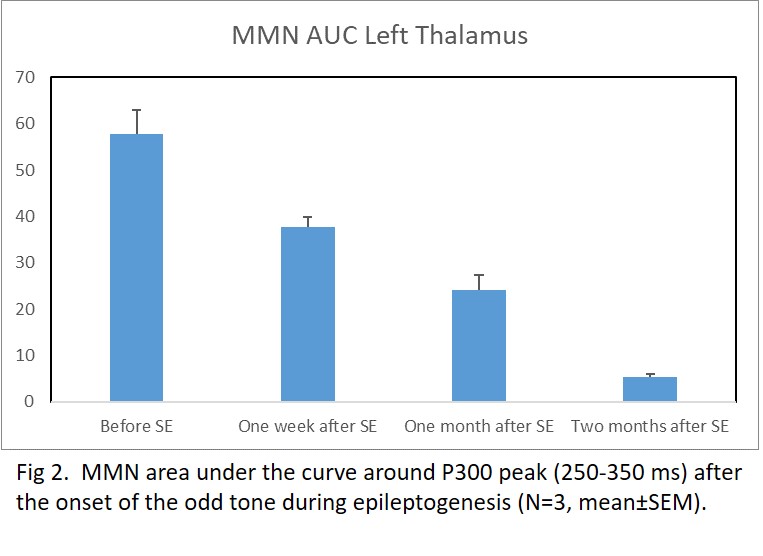