Rationale: In patients where a focal seizure onset zone can be localized, neurosurgery has been established as an effective treatment for drug resistant epilepsy. While temporal lobectomy is the most common surgical approach, concerns over cognitive outcomes for patients have led to an expansion of more minimally invasive techniques, such as selective resections and focal laser ablations. However, despite a growing list of surgical options, clinicians lack quantitative approaches to compare the impact of different procedures on brain structure and function. Cortical thickness is an important quantitative measure of brain structure which has been used in epilepsy to study disease progression. Cortical thickness can provide a quantitative measure for comparing structural outcomes after different epilepsy surgeries.

Results: Patients treated with traditional resections exhibited significantly greater global cortical thinning than patients treat with selective procedures (p = 6.2e-21). When comparing individual brain regions between the two treatment groups, there were significant differences in ipsilateral frontal orbital and insular regions (α < 0.05, Bonferroni corrected). While there was also greater cortical thinning in contralateral brain regions, none of these effects survived statistical corrections. Global patterns of cortical thinning, as well as focal driver in the frontal lobe and insular cortex can be seen in Figure 1.

Conclusions: The automated pipeline outlined here provides a method for estimating longitudinal cortical thickness changes in postoperative patients. Our data suggest that patients treated with selective procedures demonstrate less postoperative cortical thinning than those treated with traditional resections. The pattern of frontal lobe cortical thinning may reflect greater disruption of the uncinate fasciculus during temporal lobectomies. Minimally invasive approaches have been associated with superior cognitive outcomes. Certainly, a portion of this benefit can be attributed to the conservation of functional tissue that would have been removed during a traditional resection, however, this work indicates there are also downstream effects in remote brain regions which may play a role in postoperative cognitive function. 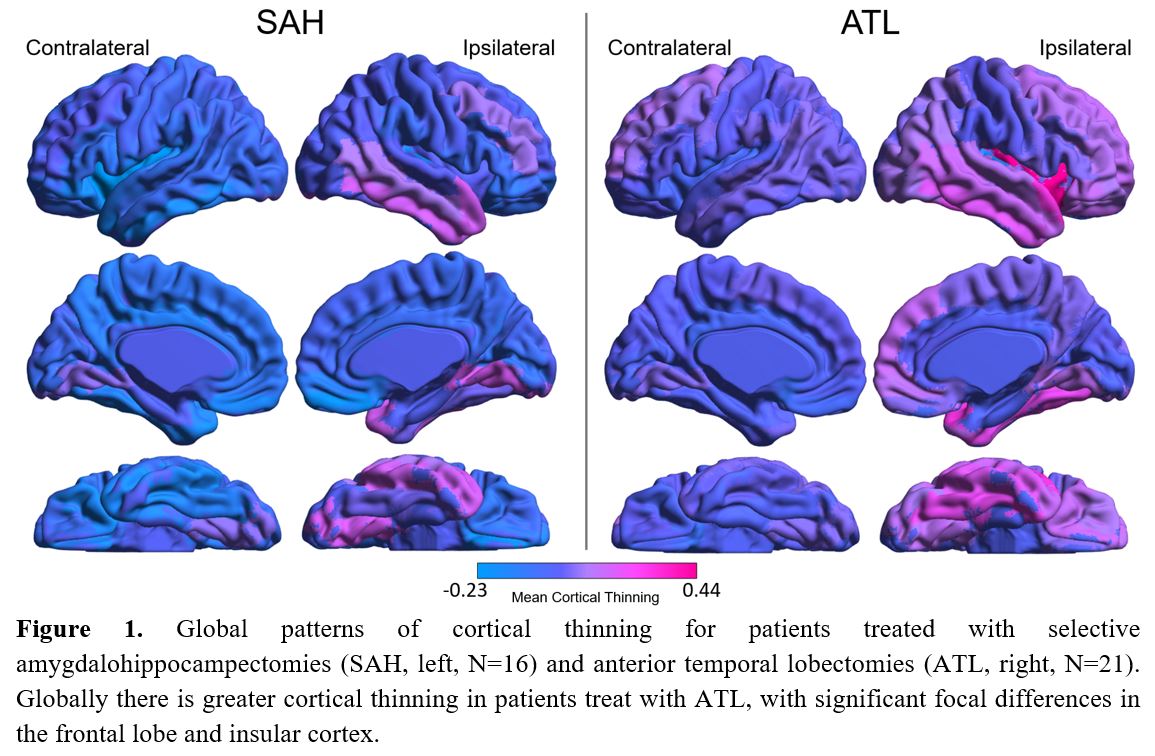