Rationale: Identifying epileptogenic brain abnormalities in pediatric surgical candidates can be challenging. Malformations of cortical development (such as focal cortical dysplasias (FCD), polymicrogyria etc) are more common in children but are heterogeneous in cortical location and can be visually subtle. Tissue contrast on clinical MRI changes with development, reflecting normal maturational processes, and can further occlude detection. This means that approaches to lesion detection optimized for adults, may not work for children.To address this, we retrospectively modeled typical developmental image contrast changes on clinical MRI, using data only from children with suspected focal epilepsy, scanned as part of their pre-surgical workup. We used the resulting image intensity charts to detect epileptogenic lesions as outliers of otherwise typical brain development.

Methods: Ninety-seven children with suspected focal onset epilepsy, undergoing assessment for surgery at Great Ormond Street Hospital, took part in the study (57 male, aged 18 months to 18 years, median 9). Of these, 34 had a later surgical resection and post-surgical histological results were available for 30, including four children with FCD 2A and 15 with 2B. Of the remaining 63 children, 24 had localized findings on MRI.

Isotropic 1mm FLAIR and MPRAGE MRI was collected on a 3T Siemens Prisma. Images were bias field corrected, spatially normalized to a template, and intensity normalized per image to a fixed median and range. Image intensity was fit at each voxel with Gaussian Process Regression [2] and ten-fold cross-validation, modelling age and sex. This resulted in predicted FLAIR and MPRAGE values with associated standard deviation (SD) appropriate to age and sex.

Deviation (Z) of typical image intensity (abnormality) was defined as the difference between the observed and model-predicted (out-of-fold) images, scaled by the predicted SD [3,4]. The deviation map was thresholded at Z >3.1 and the three largest clusters were extracted. Where the largest abnormality overlapped with resection / radiological report, this was considered total concordance, where it was one of the top three, this was considered partial (e.g., 1 true positive and two presumed false positives).

Results: Developmental contrast changes on FLAIR and MPRAGE could be reproduced using the model (Figure 1). For each dataset, the deviation (Z) from the intensity model was calculated and thresholded (Figure 2). In children with histologically confirmed FCD, 12 of 19 had their largest FLAIR cluster in the radiologically identified region. This number rose to 15/19 if using the top three clusters per participant. Of the other surgical patients, 7/15 were concordant with the region of resection. In the sample of 24 children with MRI findings but without surgery, 17/24 were concordant to the radiologically reported region.

Conclusions: By providing charts of image intensity for age and sex, we provide interpretable, probabilistic delineations of tissue abnormalities appropriate for age. FLAIR contrast was the most sensitive to pathology but not sensitive to tissue atrophy (as seen in hippocampal sclerosis). Both tissue volumetry and surface-based approaches have shown good sensitivity using T1-weighted images and could complement this approach. This approach uses only clinical MRI, no control data, performs well in the presence of image artifact (Figure 2, row 2) and is insensitive to the age of the patient, indicating its future potential for clinical use.

Funding: Please list any funding that was received in support of this abstract.: JOM is funded by the Welcome Trust and Royal Society (206675/Z/17/Z). SA is funded by the Rosetrees Trust (A2665). This research was supported by the National Institute for Health Research (NIHR) GOSH Biomedical Research Centre. 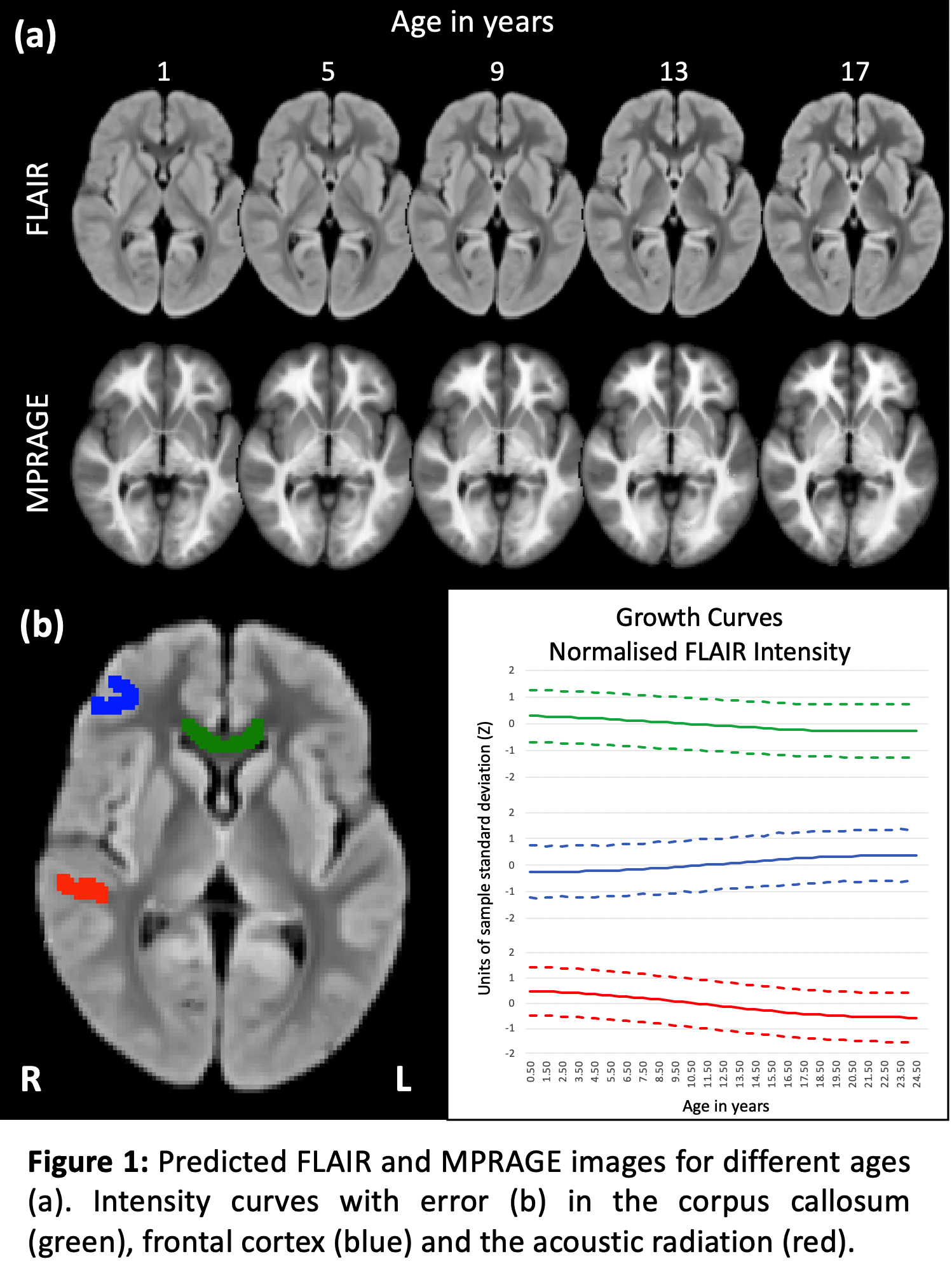 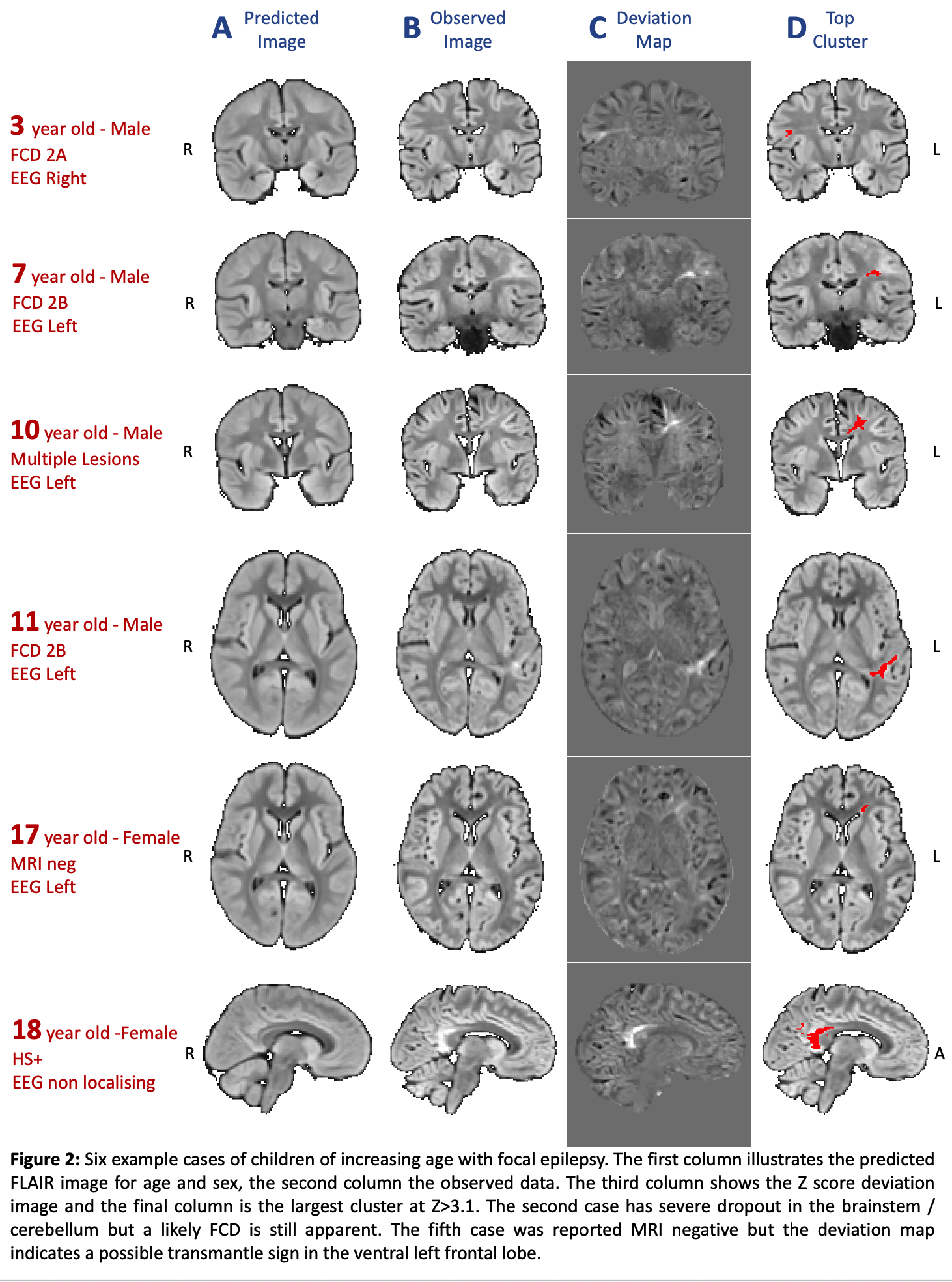