(740) Efficacy, Safety and Need for Dosing Change of Zonisamide During Pregnancy in Women with Epilepsy

This abstract is a recipient of the Kimford J. Meador Research in Women with Epilepsy Award

Rationale: To determine the efficacy, fluctuations in antiepileptic drugs (AED) level per trimester, tolerability and outcomes in women with epilepsy (WWE) treated with zonisamide (ZNS) during pregnancy. Among the newer generation of AEDs, the most commonly prescribed AEDs during pregnancy include lamotrigine and levetiracetam. There is insufficient data regarding other AEDs including ZNS. For routine use of ZNS during pregnancy, information about the efficacy, need for titration and safety for patient and fetus is necessary.

Methods: Retrospective chart review of pregnant females aged 18-45 years old who were seen at the Kentucky Neuroscience Institute at the University of Kentucky Epilepsy Clinic. WWE prescribed ZNS during pregnancy between January 1, 2013 to May 24, 2019 were included. We reviewed seizure frequency before and during pregnancy, analyzed ZNS levels during pregnancy, investigated reported side effects and monitored for congenital malformations reported in children born to these subjects.

Results: Two hundred seventy-eight pregnant WWE were evaluated and treated during this time period. Thirty-seven of these patients were treated with ZNS during pregnancy. Fourteen of these patients met the inclusion criteria. These included starting ZNS prior to conception or during the first trimester and having at least three serum ZNS levels checked during pregnancy. Serum ZNS levels for these subjects were analyzed by gestational age. While these results were not statistically significant, there was a trend toward significance which showed decreasing ZNS levels in the first half of pregnancy (Figure 1). Seizure frequency was evaluated for each subject prior to conception and during pregnancy. 38.5% had a reduction in seizure frequency during pregnancy and 61.5% had no change. None experienced an increase in seizure frequency. One of fourteen subjects (7.1%) reported side effects including dizziness and blurry vision while 92.8% reported none. Fetal outcome was followed in seven of 14 subjects. One of seven (14.2%) had intrauterine growth restriction. All seven (100%) had no reported congenital malformations.

Conclusions: Although the sample size was small, this study did show some consistent results. Our findings indicate that ZNS levels can decrease during pregnancy and may require dose adjustments. They also suggest that ZNS may be an effective, well-tolerated, and safe treatment for pregnant women with epilepsy. Further larger studies are needed to confirm our results.

Funding: Please list any funding that was received in support of this abstract.: No 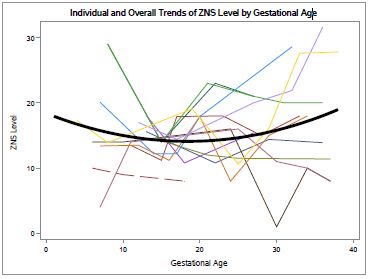