Rationale: Brain-responsive neurostimulation (RNS® System, NeuroPace, Inc.) is used to treat medically refractory focal epilepsy and also provides long-term ambulatory neurophysiologic data. We have previously demonstrated that daily counts of “detections” of epileptiform activity (as defined for each individual by their physician) can predict the eventual clinical response to newly added anti-seizure medications (ASMs) [Quraishi et al., 2019]. Here, we extended this finding by showing that detection counts are correlated with clinical outcome in conjunction with general changes in ASMs (including changing doses, adding medications, discontinuing medications, or combinations of these changes).

Methods: For each patient in the RNS System clinical trials, all epochs were identified that had stable detection settings and at least one change in total ASM load, where total ASM load = ∑(prescribed daily dose/defined daily dose) across all ASMs the patient is taking (see Meisel et al., 2016), and the defined daily dose is the dose specified by the World Health Organization as the typical daily dose for a given ASM. For each epoch in each patient, Pearson correlations coefficients (r) were calculated between (1) ASM load and detection counts, (2) ASM load and clinical seizure (CS) counts, and (3) CS counts and detection counts. If a patient had >1 qualifying epoch, the average r was computed across epochs, each weighted by the # of days in its epoch, resulting in one r for each patient. We tested whether the distribution of r’s across patients was significantly different from 0 using 2-tailed T-tests (weighting each patient’s r value by the total number of days comprising their qualifying epochs), with ∝=0.05.

Results: Of the 256 clinical trial participants, 218 had ≥1 stable detection epoch with ≥1 ASM load change (median # of epochs per person = 3). Figure 1 shows daily ASM loads; detection counts (“episodes”); long detections, often corresponding to electrographic seizures (“long episodes” (LE)); and CS counts for two representative patients during a single detection epoch. Across patients, both CS counts and LE counts had significant negative correlations with ASM load (Figure 2A), as expected if a higher ASM load results in reduced clinical seizures. There was also a strong positive correlation between CS and LE counts. Furthermore, in patients for whom ASM load was correlated with CS counts, ASM load also tended to be correlated with LE counts (Figure 2B), supporting the potential for using LEs as a surrogate for clinical seizures.

Conclusions: These results extend previous evidence that LEs could potentially provide an objective biomarker of the clinical seizure response, not only when new ASMs are added, but also when they are discontinued, or their doses are increased, decreased, or some combination thereof. 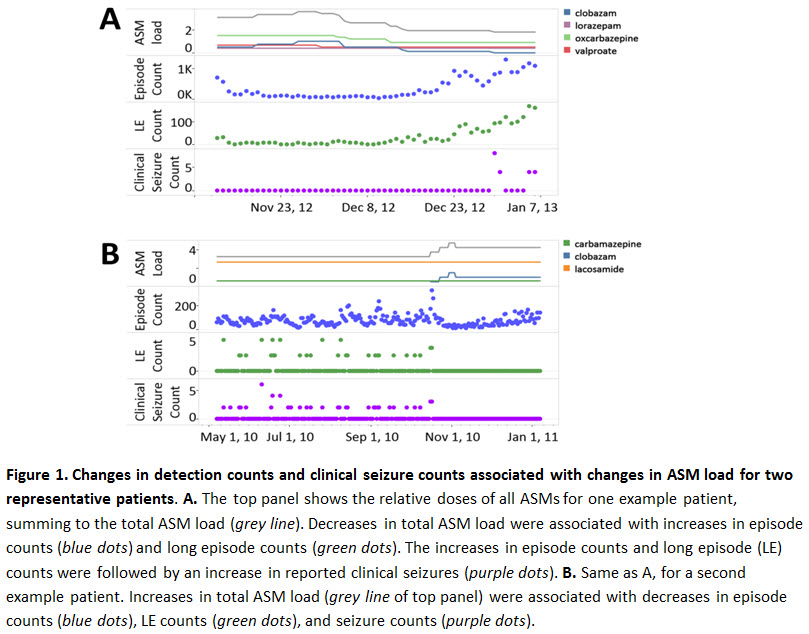 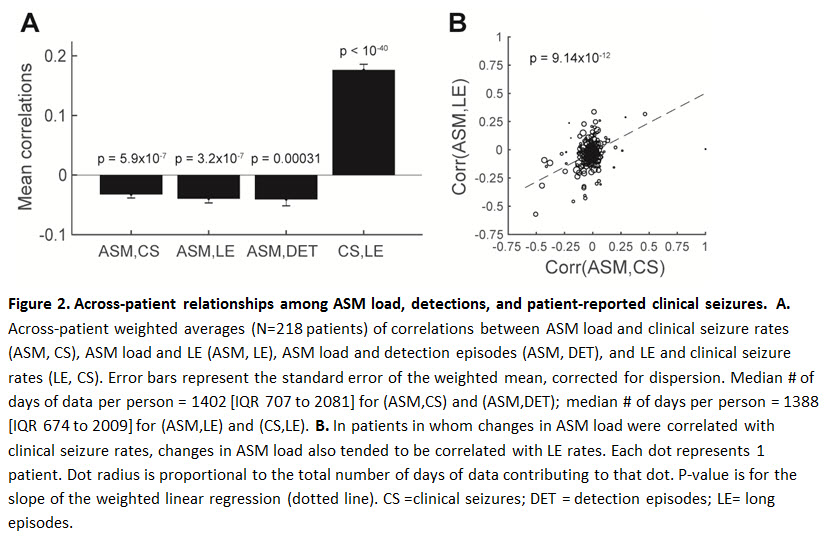