Rationale: Cardiofaciocutaneous syndrome (CFC) is a rare autosomal dominant disorder characterized by craniofacial dysmorphisms, skin findings, cardiac defects, severe developmental disabilities and seizures. Genetic changes leading to this disorder include pathogenic variants resulting in altered function of the RAS/MAPK pathway. Given the reportedly high prevalence of seizures and associated neurological disabilities, this study aims to better characterize seizures in people with this condition.

Results: Families of 94 patients (54% female, age ranges 0.6-28.6 years) completed the questionnaire. Fifty-six of 94 (59.6%) of the total cohort suffered from epilepsy. Of these, 29 (54.7%) had medically refractory epilepsy, two of whom had undergone resective surgery (without reported benefit). Forty-one of the patients with epilepsy (71.7%) had been hospitalized due to seizures at least once, averaging 4.7 hospital visits per subject. Ten of the cohort had a history of infantile spasms (17.9% of patients with epilepsy; 10.6% of the total cohort); of these, only five responded to treatment (three to ACTH and two to vigabatrin). Behavioral and cognitive disabilities were common in the CFC cohort as a whole and among patients with epilepsy (Figure 1). Multiple seizure types were documented among patients with CFC-related epilepsy (Figure 2). Three of the cohort were deceased, all of whom had medically refractory epilepsy.

Conclusions: This study presents summary results of the largest cohort of subjects with CFC. Seizures are common among people with CFC, occurring in most subjects. Medically refractory epilepsy and infantile spasms are very frequently seen among people with CFC and seizures. Patients diagnosed with CFC require careful surveillance for seizures, and particularly for infantile spasms. 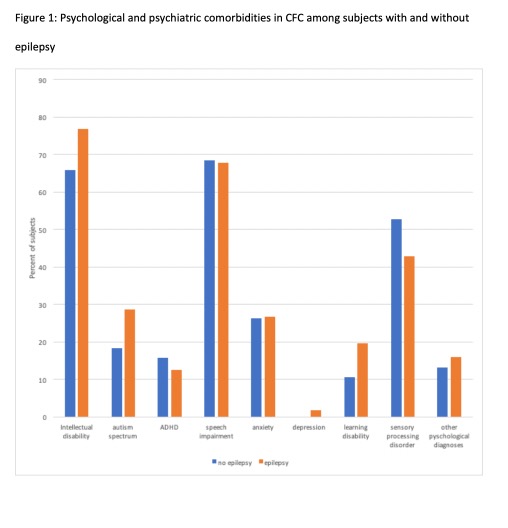 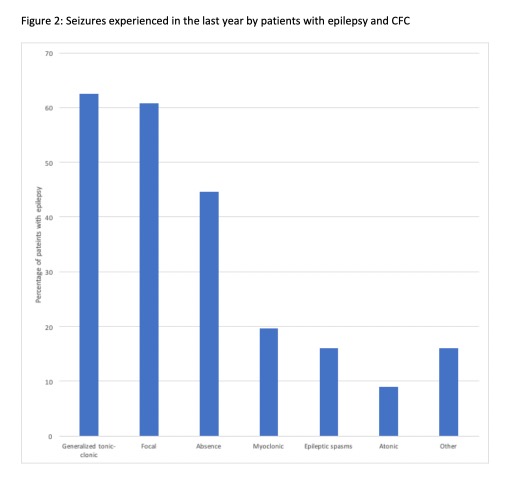