Rationale: Status epilepticus (SE) is defined as a prolonged seizure or a cluster of seizures without recovery in between. Super Refractory Non-Convulsive Status Epilepticus (SR-NCSE) lasts for minimum of 24 hours despite aggressive management with at least failure of two antiepileptics and intravenous anesthetics. We describe the clinical course of a super refractory non-convulsive status epilepticus (SR-NCSE) of unknown etiology with the poor prognostication despite treatment with multiple anti-epileptic agents, sedatives including propofol, midazolam, pentobarbital, methylprednisolone, and intravenous immunoglobulin (IVIG).

Methods: A 50-year-old female with past medical history of chronic alcohol abuse, Hepatitis B and C infection, lung mass concerning malignancy, seizures on Levetiracetam 500mg twice a day (BID), was initially admitted for breakthrough generalized tonic seizures lasting more than 45 minutes. She was loaded with 1,500 mg of Levetiracetam, intubated, started on Midazolam drip, and hooked up to a continuous electroencephalogram (EEG) monitoring which showed epileptiform activity originating in the right temporal lobe (Figure 1). She was further loaded with Valproic acid 1,000 mg and then placed on maintenance Valproic acid 250 mg every 6 hours, Levetiracetam of 1,000 mg every eight hours, and Midazolam titrated up to 25 milligrams (mg)/hour. Magnetic resonance imaging (MRI) brain with and without contrast showed diffusion restriction in the right thalamus and hippocampus with additional cortical diffusion restriction in the right anterior lobe with hyperintense T2 and hypointense T1 appearance (Figure 2). Patient underwent pan culture and was initiated on Vancomycin and Piperacillin/Tazobactam as well as Acyclovir as prophylaxis for possible herpes encephalitis.

Results: The computed tomography (CT) chest with contrast showed interval regression of right and left upper lobe nodularity and a slight increase in the size of nodule within the perihilar right upper lobe with trace pleural effusions. The patient was given Methylprednisolone 1,000 mg IV for five days for possible autoimmune encephalitis. Despite the optimal dose of Midazolam, Fentanyl, and Propofol, the agitation remained an issue. Cerebrospinal fluid (CSF) analysis on day three did not show evidence of infection, and hence Acyclovir was discontinued. The patient remained seizure free until day 15 of hospitalizaton where she re-redeveloped the subclinical status epilepticus.

Conclusions: The patient remained in status epilepticus on EEG every time phenobarbital was weaned despite triple antiepileptic therapy and IVIG. The family decided to pursue comfort care on day 21. There were some limitations in our report as we did not opt for aggressive measures like ketamine drip, hypothermia protocol, vagal nerve stimulator placement or palliative epilepsy surgical option, including corpus callosotomy in RSE. No clear etiology was identified that led the “brain on fire” for our patient. 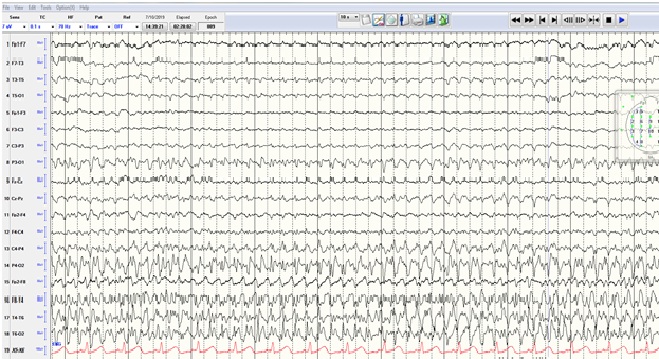