Rationale: Episodic memory impairment is common in temporal lobe epilepsy (TLE) because of the importance of mesial temporal structures to memory (Gleissner et al., Epilepsia 2002; 43: 87-95). Abnormal functional connectivity (FC) and structural volume (gray matter; GM) have both been associated with memory deficits in temporal lobe epilepsy (TLE), (Doucet et al., PLoS One 2016; 11: e0154660). Few studies have examined the degree to which these two sets of memory-related abnormities are concordant with regard to the regions implicated in the memory deficit.  It is also unclear which of these abnormalities is more important to episodic memory performance in TLE. Accordingly, in this project, we seek to address two questions: 1) Do the areas that show abnormal FC during episodic memory task performance also show abnormal GM volume?; 2) Does episodic memory performance depend on the integrity of both FC and GM volume, and which of these is a better predictor of memory performance. Our working hypothesis is that concordant integrity in both function and structure will best serve successful memory, with abnormalities in either sufficient to cause memory failure. As TLE patients may implement memory with a reorganized network, we will examine these questions from the perspective of brain responses in both the ictal and non-ictal hemisphere.

Results: Utilizing the ictal hippocampus as seed, we determined the FC differences between Good and Poor PAM performance as a function of group status (LTLE vs. HC); interaction term). Relative to the HCs, Good performance in the LTLE group was associated with strong FC involving nine regions (see Figure 1a), bilaterally. The same gPPI analysis utilizing the non-ictal hippocampus as seed revealed Good performance in the LTLE group compared to HCs was associated with strong FC to eight regions, mostly right-temporal in nature (see Figure 1b). Next, we tested for LTLE/HC differences in the GM volume of the regions found significant in the above gPPI analyses (17 regions). Of these 17, ten areas showed significantly lower GM volume in LTLE (p< .05). Lastly, within the LTLE group, we trained a linear SVM regression model with the above subset of significant FCs (beta weights) and the matching GM regions (volumes) serving as predictors of PAM accuracy (response variable). The SVM model was significant [RMSE= 0.18; R2 = 0.63, MSE= 0.03, MAE= 0.14], indicating that both FCs and the underlying GM volumes reliably contribute to PAM accuracy.

Funding: Please list any funding that was received in support of this abstract.: 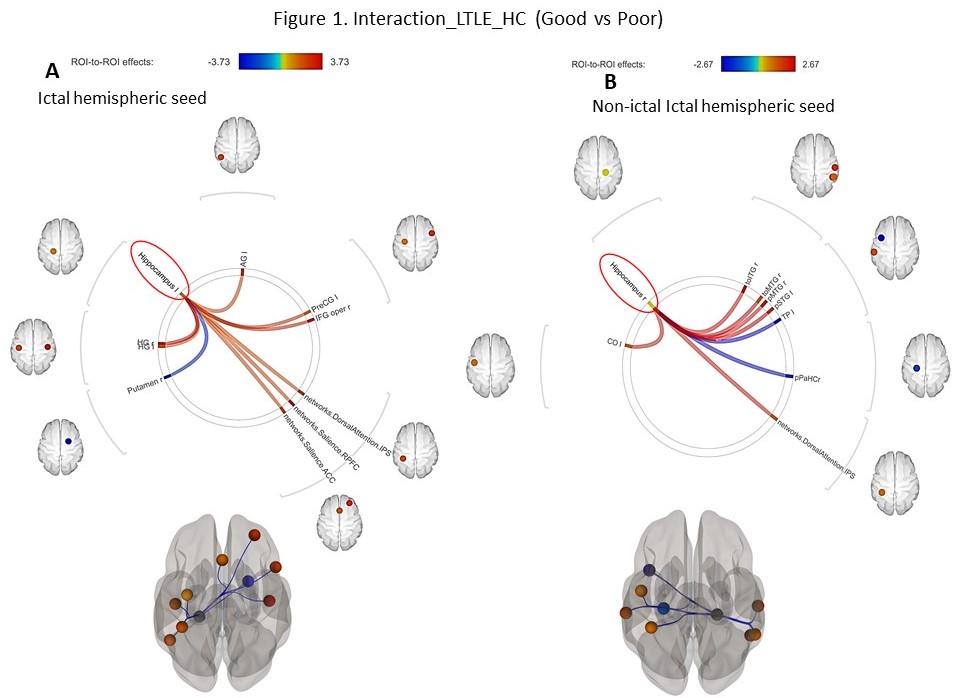 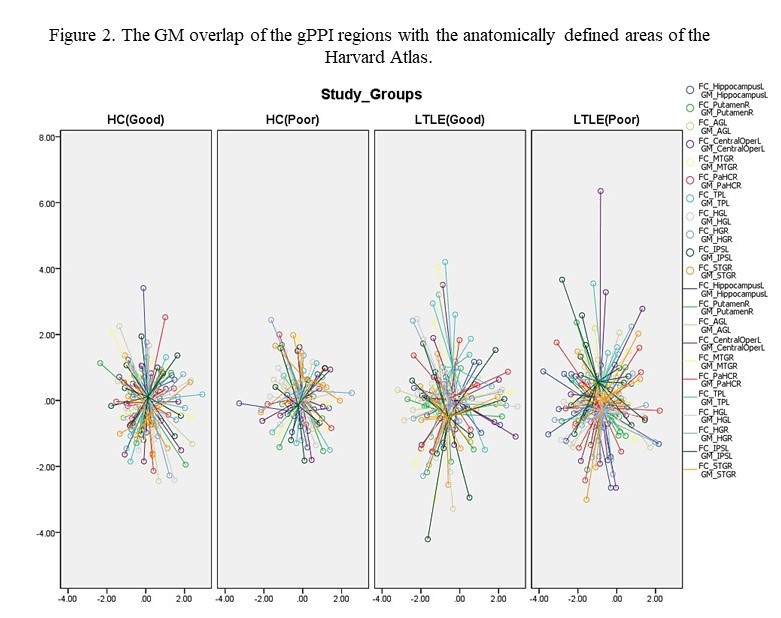