Rationale: Cycles of epileptic brain activity operating over daily (circadian) and multi-day (multidien) timescales organize seizures in focal epilepsy, but whether changes in these cycles relate to clinical outcomes is unknown. Here, we identified people with epilepsy who reported becoming seizure-free during years-long participation in the RNS System clinical trials and asked whether circadian and multidien cycles changed with seizure freedom.

Methods: Subjects in the RNS System clinical trials were identified who self-reported seizure freedom for a continuous period of at least 12 months. Wherever chronic EEG data (cEEG) from the RNS System was available and free of gaps, circadian and multidien cycles of interictal epileptiform activity (IEA) were characterized and power spectra from before and after development of clinical seizure freedom were compared. Significant peak periodicity was tested against surrogate timeseries (n=100), where calendar days and their corresponding 24-hour IEA were randomly permutated.

Results: Analysis of data from 213 participants in the RNS System clinical trials showed that 18 (8.5%) had cEEG available for at least one 12-month period during which there were no seizures reported. Half of these subjects (N=9) had abrupt onset of seizure freedom concurrent with an identifiable medication (Figure 1a, c) or stimulation change (Figure 1i), while the other half had a progressive decrease in seizure frequency culminating in seizure freedom (Figure 1e, g). Prior to becoming seizure-free, all 18 subjects had clear circadian and multidien cycles of IEA. However, upon becoming seizure-free, multidien cycles of IEA disappeared in 14 out of 18 (78%) subjects (Figure 1b, d, f, h, j). Circadian cycles of IEA persisted in 17 out of 18 subjects (94%) but with decreased magnitude.

Conclusions: In this cohort, development of clinical seizure freedom was consistently associated with changes in cycles of IEA. Although causal relationships cannot be established, these findings suggest that cycles of IEA may represent novel biomarkers for treatment response over long periods of time. 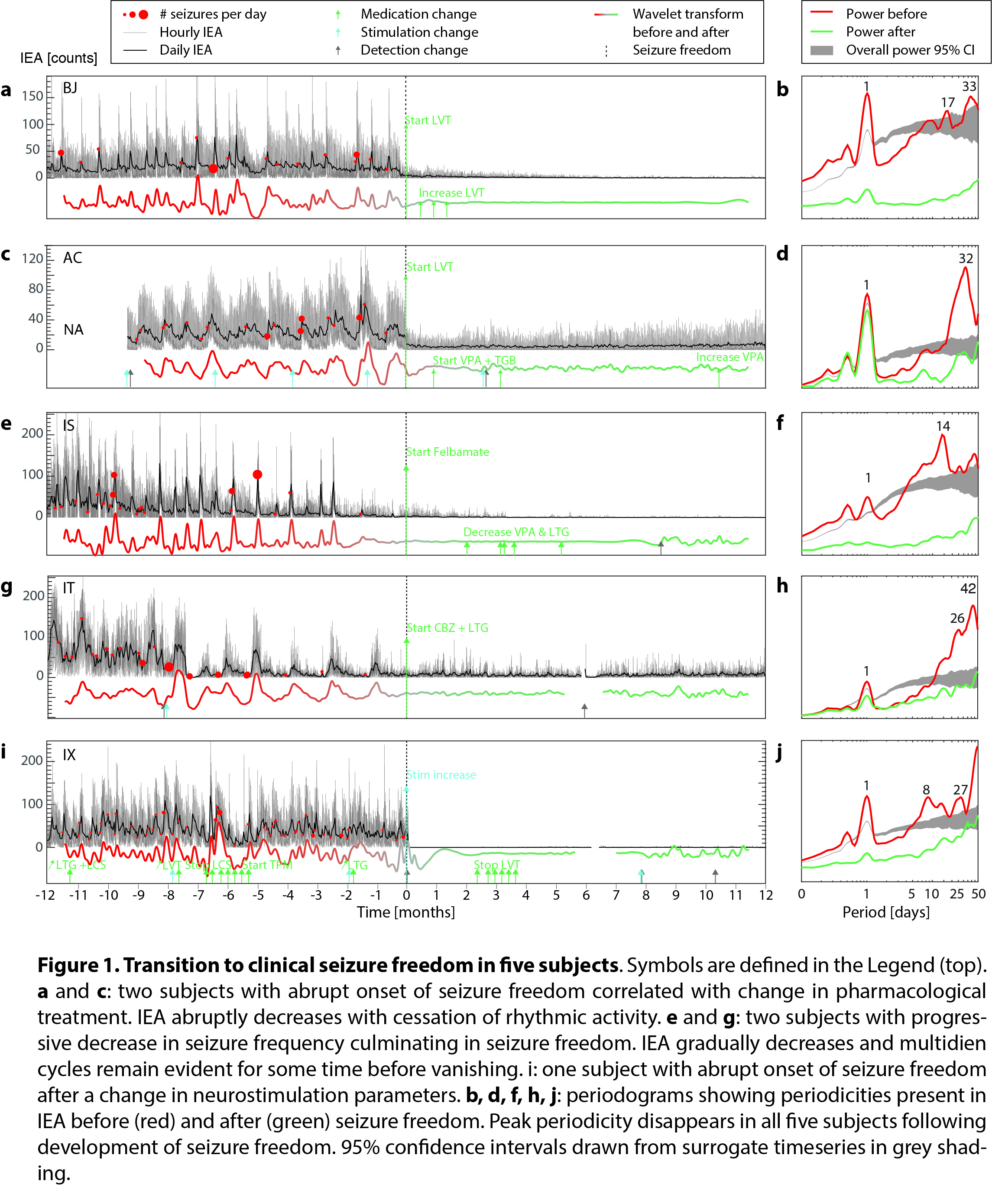