Rationale: People with epilepsy (PWE) are more sedentary than the general population, have poorer physical fitness, show more pronounced decline in aerobic capacity with age, and have higher BMI, all of which has significant impact on the general health of these patients.1-3. The general health benefits of exercise are well established, but the effects of exercise within the specific context of epilepsy remains undetermined. Animal studies suggest that exercise can reduce seizure frequency and therefore may be a promising therapeutic to improve epilepsy and epilepsy-associated comorbidities. However, factors such as lack of transportation, dependence on caregivers, and seizures themselves may limit the ability of PWE to participate in traditional exercise interventions. Thus, we conducted a cross-sectional survey of PWE at Wake Forest Baptist Medical Center (WFBMC) to examine the perception of exercise, the barriers to exercise, and the willingness and ability to participate in an exercise intervention in this population, in order to inform the design of future exercise intervention trials.

Methods: Adult patients presenting to the Adult Epilepsy Clinic at WFBMC in Winston-Salem, North Carolina were surveyed via a 45 item survey aimed to address current activity habits, beliefs regarding exercise, barriers to routine exercise, and interest in participating in an exercise intervention. Data was also collected regarding demographics, medications, type of epilepsy, and medical history.

Results: From 112 respondents, 95 reported a clinical diagnosis of epilepsy (56 female, median age 42). Sixty-six (68.0%) believe that exercise could improve their seizure frequency, and 67 (69.8%) were willing to participant in an exercise intervention. However, almost half (40%) said their neurologist had never talked to them about exercise. The most commonly reported barriers to exercise were lack of time and fear of having a seizure.. The majority of respondents (53.7%) who were interested in an exercise intervention reported they were unable to come to in-person exercise sessions on a regular basis, most commonly due to the distance required to travel to the Medical Center for the intervention, time constraints, and lack of transportation (Figure 1).

Funding: Please list any funding that was received in support of this abstract.: This study was supported by the Wake Forest NeuroNext Fellowship Award 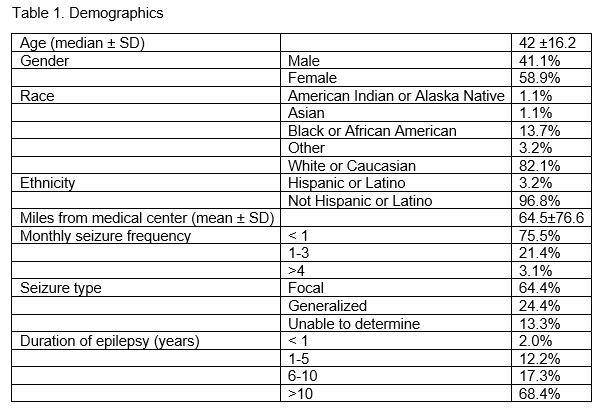 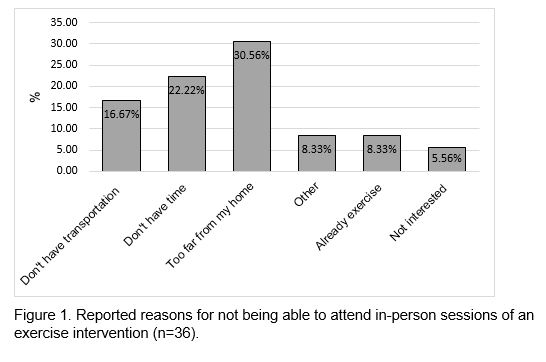