Rationale: To identify characteristic electroencephalogram (EEG) features in critically ill patients presenting with seizures prior to their death while being monitored.

Methods: We identified four patients presenting with seizures who died during continuous EEG (cEEG) at our institution from June 2016 to Oct 2018. We collected the clinical information, analyzed changes to EEG and EKG prior to cardiac arrest and death using continuous video-EEG and one lead EKG telemetry data. The EKG telemetry data was independently reviewed by a cardiologist (VKR).

Results: The time span from initial change in EEG background to cardiac arrest (T1) ranged from 35 to 2202 minutes (mean 620.75± 914.3­), EEG suppression to cardiac arrest (T2) was 33 to 327 minutes (mean 109 ± 125.9), and complete EEG suppression to cardiac arrest (T3) was one to 30 minutes (mean 19± 11.5). All patients presented with seizure or seizure-like episodes but no epileptiform discharges or subclinical seizures were captured during cEEG. There were background EEG changes in all cases more than 30 minutes prior to cardiac arrest (seen Figure 1 for detailed timeline of events on cEEG and telemetry). One patient had baseline intracranial pathology which was acute stroke in the left middle cerebral artery territory. Except for one patient with cardiac pacemaker, the continuous single lead telemetry demonstrated a variety of EKG changes prior to cardiac arrest ranging from sinus bradycardia and episodes of asystole (n=3), junctional escape (n=2), AV block (n=2), Atrial fibrillation and SVT (n=1), widening of QRS complexes (n=3), and ventricular rhythms (n=1). One patient underwent post-mortem autopsy and demonstrated diffuse acute microinfarcts and gliosis in the brain.

Conclusions: This preliminary study demonstrated that major EEG changes followed by EKG changes occur minutes to hours prior to cardiac arrest and death. While, here was no correlation between underlying intracranial pathology (only one patient had stroke), we hypothesize that irreversible cortical damage may precede circulatory failure and cardiac arrest. The progressive brain ischemia and hypoxia is likely the underlying cause of the EEG characteristics as one post-mortem study showed diffuse acute microinfarcts in the cortical region. Further studies with broad-scale cardiac telemetry and neurophysiological monitoring may help develop models for predicting cardiac arrest.

Funding: Please list any funding that was received in support of this abstract.: NA 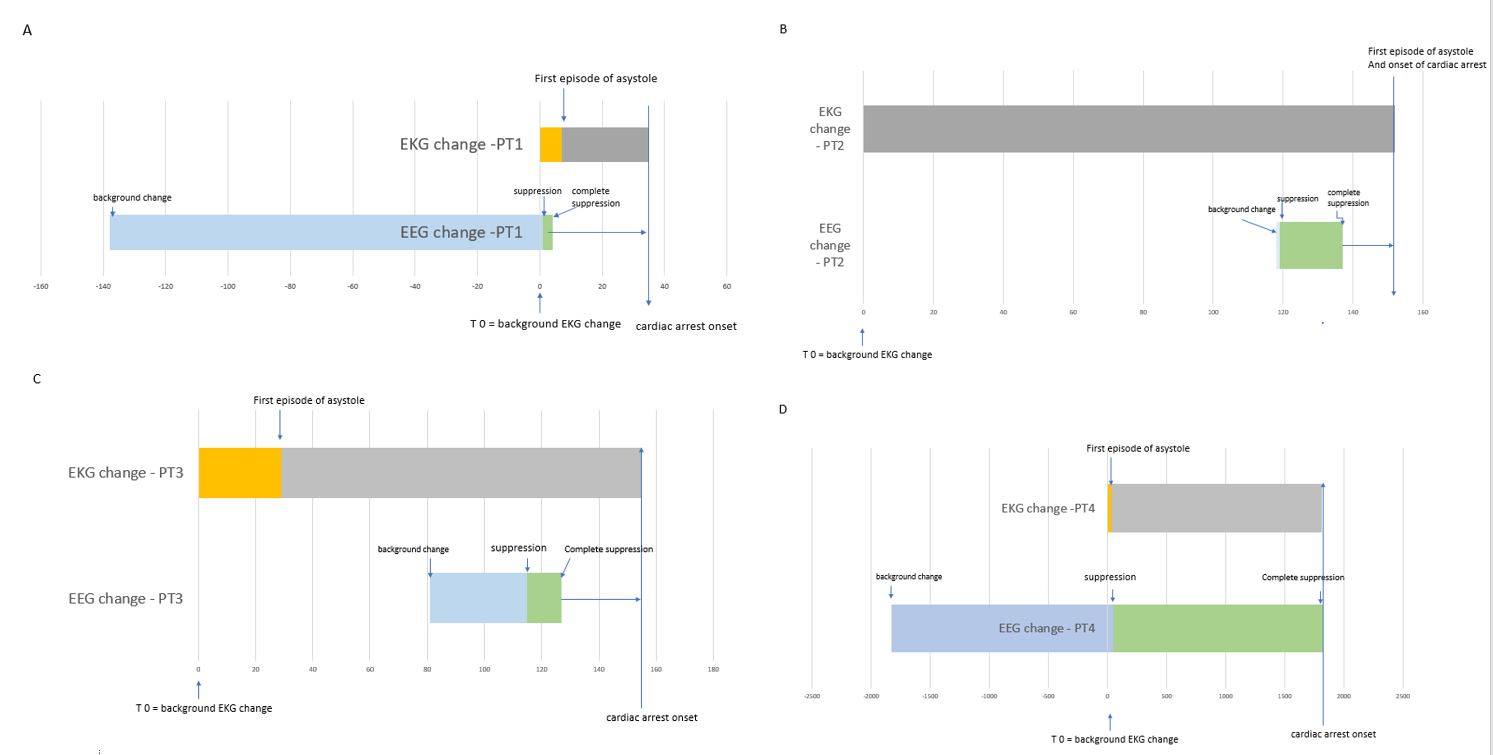