Rationale: Optogenetic inhibition of dentate gyrus (DG) granule cells using the light-sensitive chloride pump Halorhodopsin could successfully terminate seizures in the intrahippocampal kainic acid mouse model (1). However, Halorhodopsins can only transfer one ion per photocycle and their prolonged activation can disrupt neuronal physiology (2). To circumvent these issues light-sensitive chloride channels like stGtACR2 could be used. Light-sensitive chloride channels can clamp neuronal membranes at equilibrium potential of chloride and shunt membrane depolarizations (3). In this study, we tested the effect of activating stGtACR2 in the dentate gyrus (DG) on an acute model of electrographic seizures.

Methods: Male SD rats (300 – 400 g, n=6) were injected bilaterally with 0.9 µl of AAV 2/7-CamKIIα-stGtACR2-fRed (6.76 × 1011 gc/ml) in the dorsal DG to induce expression of stGtACR2 in granule cells. Three weeks later light pulses were delivered in relation to electrical stimulation of the perforant path to evaluate optogenetic inhibition of DG evoked potentials (EPs). A stimulation electrode was positioned in the perforant path (PP) and an optrode (optic fiber + recording electrode) was placed at DG. Blue light was delivered with a light power density of 127 mW/mm2 at the optic fiber tip, which was 500 µm above the recording electrode contact. Different light pulse durations and timing of the light pulses relative to the onset of the population spike (PS, i.e., summed action potentials of DG granule cells in response to PP stimulation) were evaluated for both hemispheres. At the end of EP experiments seizures were induced by tetanic electrical stimulation (10 s, 20 Hz, 0.2 ms biphasic pulses) of PP (n = 5). In three out of six seizures, 30 s of illumination was performed immediately after electrical stimulation. Ratio of the total line length of seizure activity for illumination to non-illumination condition was calculated.  Mean ± SEM of the compared data is given.

Results: Activation of stGtACR2 during DG EPs inhibited the PS. Inhibition was significantly more pronounced with shorter pulse durations (10 – 80 ms) compared to longer light pulses (160 – 640 ms) ending immediately before the onset of the PS. The PS amplitude ratio in light on/light off conditions dropped to 0.05 ± 0.02 for 10 ms light pulses while it was 0.25 ± 0.04 for 640 ms light pulses. The inhibitory effect of 10 ms light pulses was lost when the interval between the light pulse and the PS was 36 ms or more.Further, with activation of stGtACR2 an inhibitory effect on electrographic seizures was observed. Illumination for 30 s significantly reduced local field potential activity during seizures (fig. 1) (ratio: 0.31 ± 0.04). Total duration of seizure activity was not reduced in response to illumination (No light: 30.7 ± 2.8 s vs. With light: 29.7 ± 2.9 s).

Funding: Please list any funding that was received in support of this abstract.: This project was funded by FWO, Belgium. 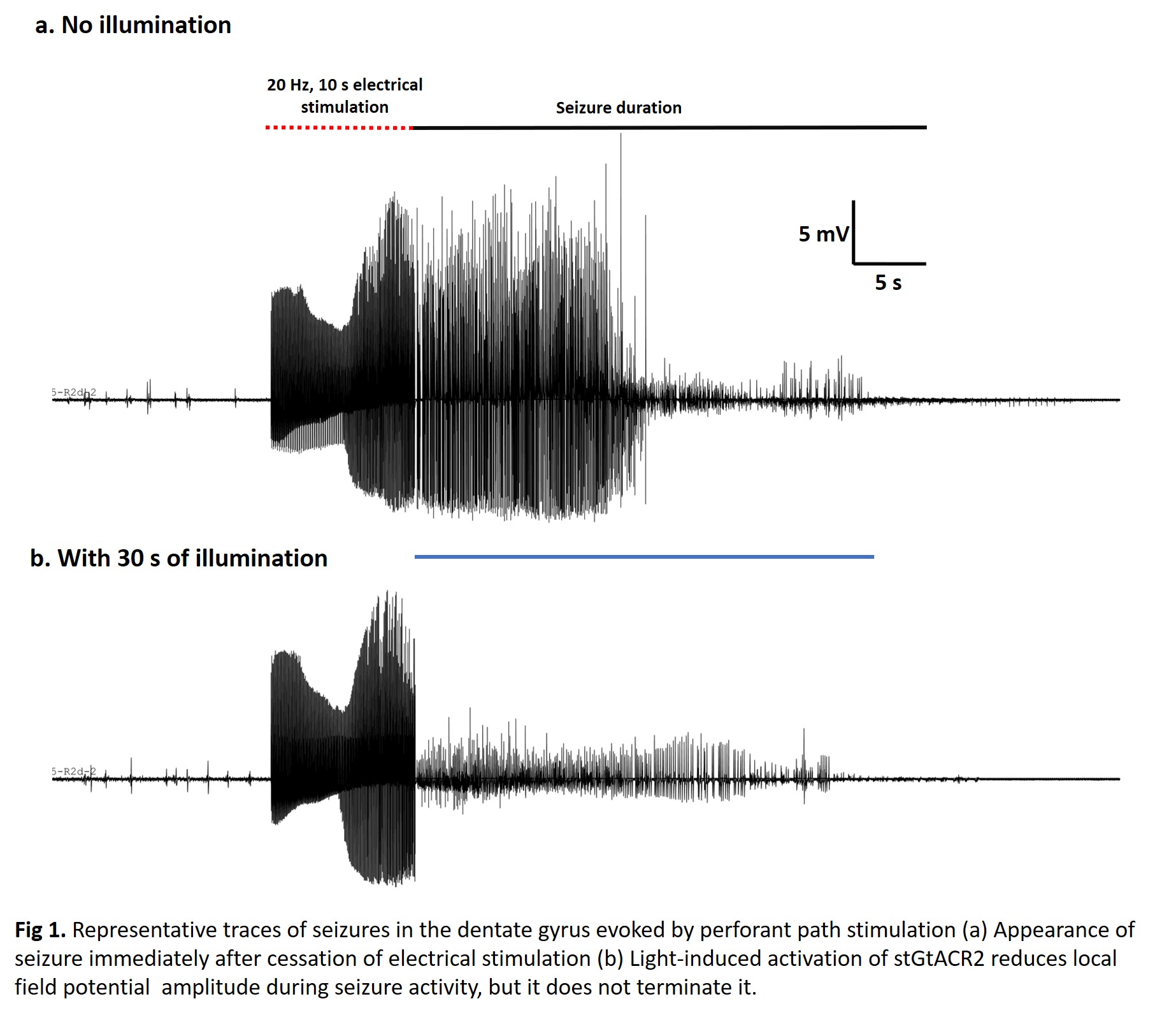