Rationale: Most patients with Hypothalamic Hamartoma (HH) experience intractable and progressive seizures, but the course of the epilepsy can be very heterogeneous. This epilepsy differs from other types, as the ictal focus lies subcortically. However, scalp EEG patterns occur, suggesting secondary epileptogenesis in some patients. The networks through which these seizures arise from the HH to the cortex are still largely unknown, and previous studies focused on subcortical propagation exploration. Therefore, we conducted a systematic analysis of seizure networks in 34 HH patients by long-term video-EEG-monitorings (VEEGs) and correlated the network extent with patient and hamartoma characteristics.

Methods: We included all patients with structural epilepsy due to HH which underwent at least one non-invasive VEEG between 2010 and 2020 and without brain surgery prior to that VEEG (n=34). All recorded seizures were visually analyzed with regard to semiology and seizure patterns. Site of seizure pattern and early propagations were analyzed and visualized using the Matplotlib-library for python. For further investigations, patients were grouped into either focused (F-group, n=17) or extended disease group (E-group, n=17). They were considered to have extended disease if one of the following occurred: a) scalp EEG-onset in more than 2 lobes (uni- or bilateral), b) seizures with early propagations (< 2sec) to other lobes, or c) >two different seizure types. Patient- and HH-characteristics where compared between groups.

Results: Three hundred ninety ictal events in 44 VEEGs (total of 214 days) were analyzed. Patients’ age was between one and 55 years (mean 15.9, 22 were children) and epilepsy duration 1-48 years (mean 12.9). Overall, 253 events were classified as focal aware seizures, 118 as focal impaired awareness seizures, and eight as bi-hemispheric (generalized) seizures. A hallmark gelastic component was observed in 236 seizure events. As shown in Figure 1, the first ictal EEG activity most commonly occurred within frontal- and temporal lobes, seizures with occipital onset were rare. Network extent strongly differentiates between E- and F-group (Figure 1b, 1c), with seizures commonly lacking EEG-correlate in the latter group. Groups do not differ in terms of hamartoma size, patient’s age at onset or disease duration (Figure 2a). However, seven out of eight patients with more than one pre-interventional VEEG showed an increase of seizure frequency from first to last VEEG (Figure 2b).

Conclusions: Previous network studies in HH patients focused on initial, subcortical propagation patterns. In this scalp EEG study, we could show that seizure networks vary greatly with regard to network form and extent and although common features exist, networks neither correlate to history of disease nor type or size of HH. Further analysis of this data will need to take more hamartoma and patient characteristics into account. In future, a patients’ individual connectome, subcortically as well as cortically, might help to understand differences in disease progression and may aid in surgical disconnection planning.

Funding: Please list any funding that was received in support of this abstract.: K.A.K. was supported by the Berta-Ottenstein-Programme for Clinician Scientists from the Faculty of Medicine, University of Freiburg. 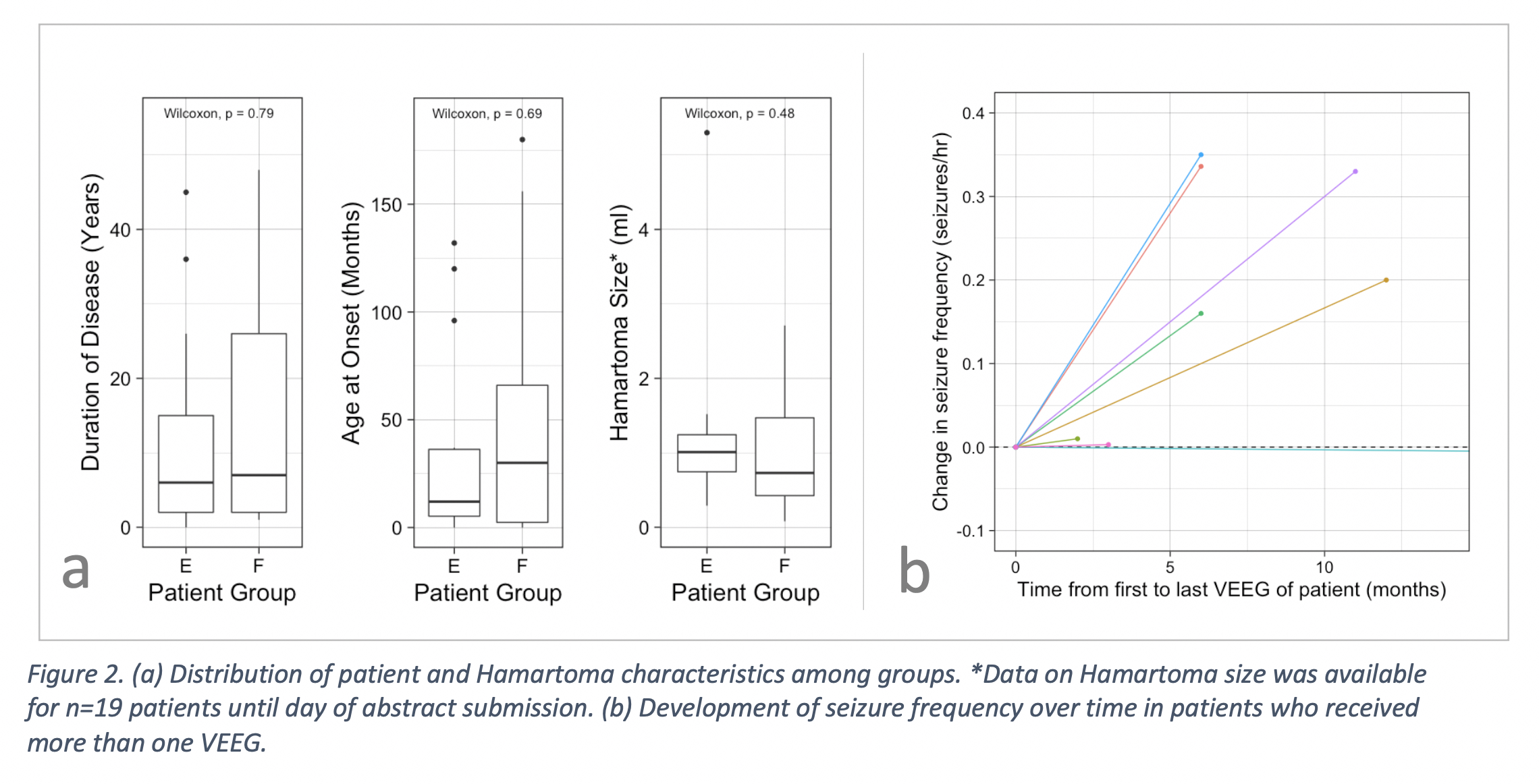 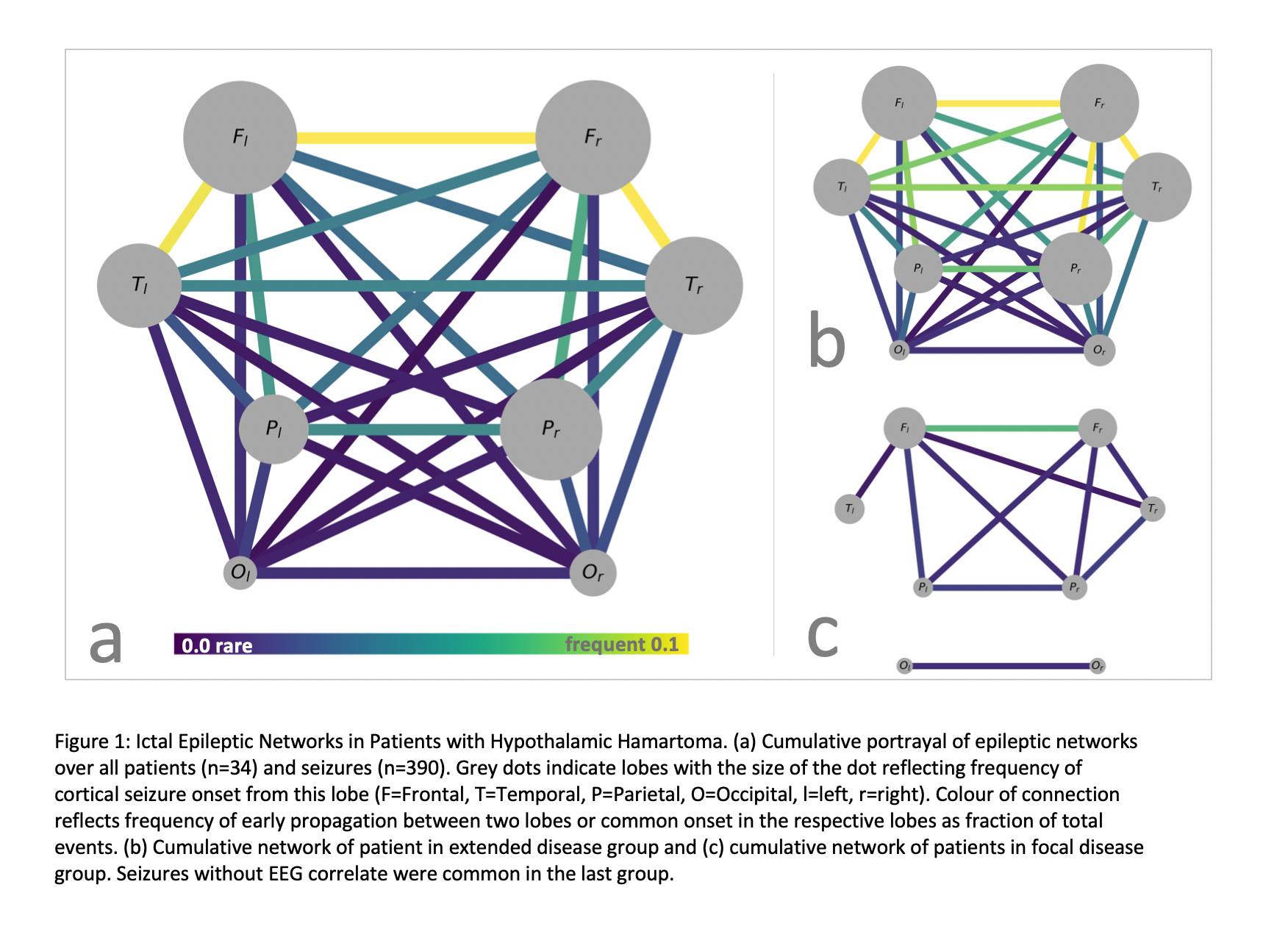