Rationale: The mechanisms that underlie patterns of seizure propagation following ictal onset remain elusive. Identifying unique structural features of the epileptic brain are crucial for understanding how seizures spread and for ultimately informing how surgical interventions may more reliably achieve seizure freedom. We sought to identify candidate white matter bundles that could play a critical role in the directionality of ictal spread in subjects with temporal lobe epilepsy.

Methods: A total of 34 subjects who underwent intracranial electroencephalography (EEG) and magnetic resonance - diffusion tensor imaging (MR-DTI) at MUSC Comprehensive Epilepsy Center between 2007 and 2018 were included in the analysis. Diffusion MRI connectometry (Yeh et al. NeuroImage 125: 162-171, 2016) was used to study the effect of seizure spread directionality on connectometry indices. Direction of seizure spread was categorized as a binary value in the anterior-posterior or medial-lateral direction upon evaluation by two independent neurologists and was resolved by a third non-neurologist physician in cases of disagreement (Cohen’s kappa .92). A multiple regression model was used to consider direction of seizure spread and laterality of seizure onset. A T-score threshold of two was assigned and tracked using a deterministic fiber tracking algorithm (Yeh et al. PLoS ONE 8(11): e80713, 2013).
to obtain correlation tractography. The quantitative anisotropy (QA) values were normalized. Topology-informed pruning (Yeh et al. Neurotherapeutics, 16(1): 52-58, 2019) was conducted with one iteration to remove false connections. All tracks generated from bootstrap resampling were included. A false discovery rate (FDR) threshold of 0.05 was used to select tracks. The seeding number for each permutation was 50,000. To estimate the false discovery rate, a total of 20,00 randomized permutations were applied to the group label to obtain the null distribution of the track length. The tracking algorithm used the cerebellum as the terminating region.

Conclusions: Several common indices of interest implicate callosal fibers as a key white matter bundle associated with the directionality of seizure propagation in temporal lobe epilepsy. Other tracts of interest that demonstrate a statistically significant association with the directionality of seizure spread based upon FA, MD, and QA include the right cingulum, the right arcuate fasciculus, the left arcuate fasciculus, the right inferior longitudinal fasciculus and the right corticospinal tract. Whether such associations can be used to inform surgical intervention remains outstanding. Further studies exploring these associations in other models of epilepsy is warranted. 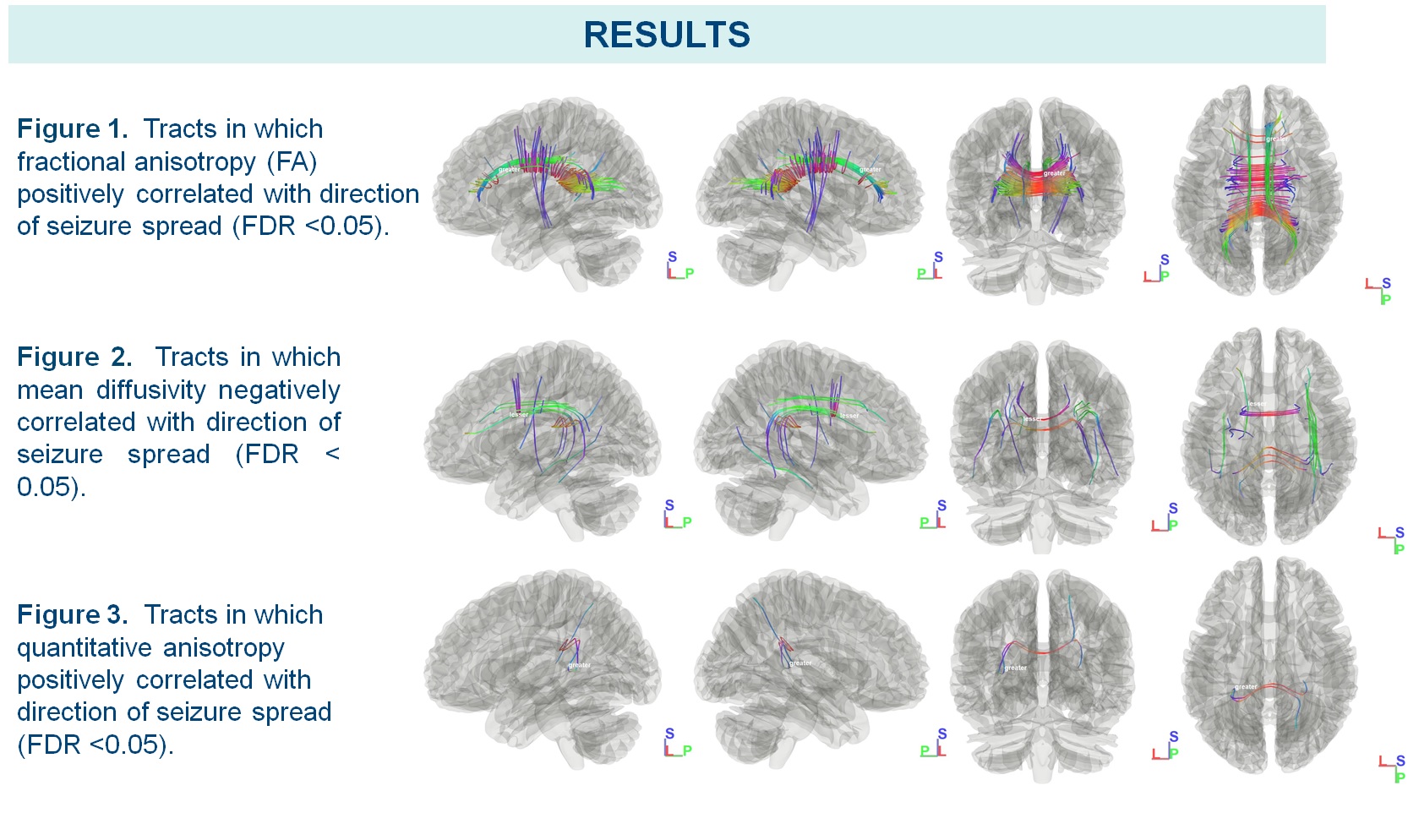