Rationale: Epilepsy is one of the major neurological disorders that is characterized by recurring seizures, affecting an estimated 50 million people worldwide. Monitoring electroencephalography (EEG) recordings have shown that changes in functional connectivity networks (FCNs) occur in epilepsy depending on the location of the epileptogenic focus and disease severity. Here, using the cross-correlation coefficient (CCC; r2) approach, we investigated the temporal correlation between electrodes as a connectivity metric on data obtained from scalp EEG data recorded at Baptist Hospital in Miami, FL. This is a case study focusing on a male patient diagnosed with generalized epilepsy and a female patient diagnosed with focal epilepsy having partial complex seizures as means to investigate the nature of the connectivity patterns in between brain regions for the different epileptiform discharges (ED) as observed in focal and generalized epilepsy.

Methods: We analyzed the FCNs of three different patterns of interictal epileptiform discharges (ED: single, complex, and repetitive spikes) in four different regions of the brain (Left and Right hemispheres, Anterior and Posterior sides) between electrode pairs in one-second segments. The EEG data were collected from the 19 electrodes shown in Figure 1 (Panels A-C) using the standard 10-20 EEG system. Thirty segments were selected randomly for the ED types under consideration (ten for each type), with similar characteristics within each spike. Using the proposed CCC technique, we explored connectivity matrices that help identify network synchronizations based on the number of connections and strength of connections for all brain regions. For visual appreciation, thresholds of 75%, 85%, and 95% of the max CCC were applied to demonstrate average connectivity matrices as illustrated in Figures 1(D) and 1(E).

Results: We found different connectivity patterns among the three ED types within and between brain regions. Using the same selected thresholds, the single spike resulted in a lower number of connections with weaker connectivity strength in all regions as compared to the complex and repetitive spikes as revealed in Figures 1(D) and 1(E). This finding supports the notion that single spike cases are more likely indicative of focal epilepsy, explaining the more localized connections in the brain in contrast to the complex and repetitive spikes for the generalized case where the connections are found to be stronger and more prevalent in all regions. Figure 2(A) shows the one-way ANOVA test that indicates statistically significant differences between the average connectivity of a single spike, characterizing focal epilepsy, and the other two ED types (complex and repetitive), which characterize generalized epilepsy. Our results demonstrated a higher number of strong connections owing to spike activity in the EEG segments only for two types of ED (i.e., complex and repetitive spikes) which characterize generalized epilepsy; Figures 2(C) and 2(D) illustrates a negatively skewed connection distribution for these two ED types in contrast to Figure 2(B) reflecting the connection strength of a single spike.

Conclusions: Our findings suggest that the different distributions of the connectivity patterns and the strength of the connections are associated with the type of epilepsy. This study highlights the fact that EEG segments alone can be considered as key indicators for the diagnosis of focal and generalized epilepsy regardless of the ictal events. 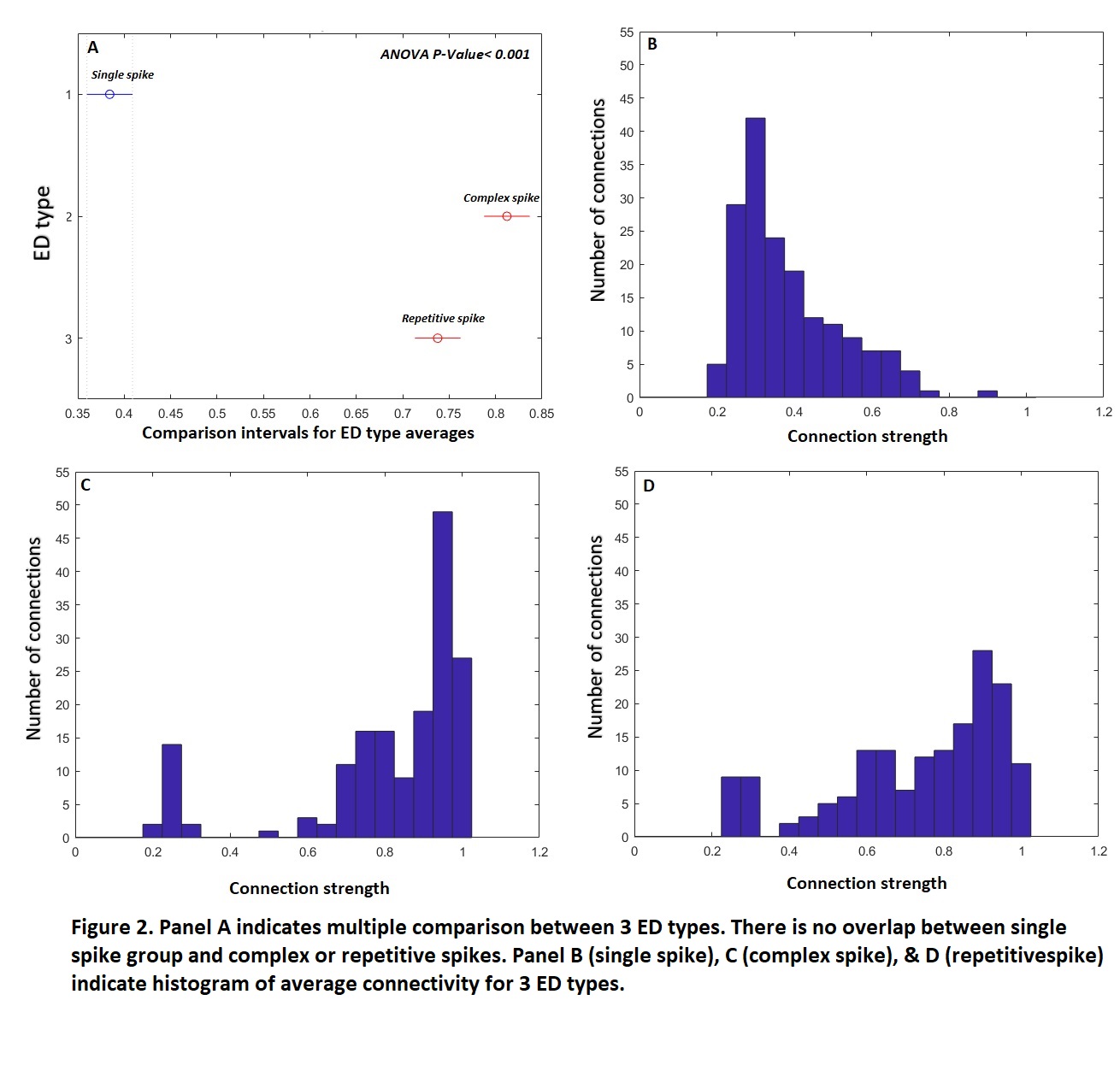