Rationale: To assess the effect and feasibility of a residency education intervention that is multi-modal and interdisciplinary in approach to train residents in pediatrics, med-peds, and neurology at our institution on how to provide health transitions care (HCT) to adolescent patients with epilepsy.

After nearly a decade of effort, widespread implementation of HCT to youth with special health care needs (YSHCN), has not been fully realized. While graduate medical education (GME) in HCT has been identified as an important area of need, there are currently few studies concerning effective GME models.

Methods: An online questionnaire was sent to all 78 residents in neurology (N), pediatrics (P), and med-peds (MP) at MGUH. The 15-item pre-intervention questionnaire that assessed knowledge, confidence, and experience at providing HCT to young patients with epilepsy comprised of closed-ended questions with nominal and Likert-type response scales, open-ended qualitative questions, and general demographic information.
Participants were then invited to complete a Simulation Training and Educational Lab module that included an online presentation of the core elements of HCT.
Participants were then randomized to participate in a live, case-based workshop on HCT adopted from the Medical Home Modules for Pediatric Residency Education.
At the completion of the interventions, a 15-item questionnaire was sent to all residents who completed the pre-intervention survey.
Continuous variables were summarized as means and standard deviations and categorical variables were aggregated as frequencies and percentages. The difference of mean rating was compared using the Wilcoxon signed rank test and the categorical variables were compared with McNemar’s test between pre and post-intervention responses.

Results: Of 78 residents, 26 completed the pre-intervention questionnaire. Majority were junior residents. Majority of respondents also indicated their intent to pursue sub-specialization as opposed to primary care post-residency.In the pre-intervention sample, majority rated their knowledge of HCT to be minimal (54%). There were more P and MP residents though who reported moderate (50%) knowledge of HCT compared to 17% of the N residents. P and MP residents reported greater familiarity with adult heath care providers trained in HCT compared to their N colleagues. Both groups identified didactic lectures and clinical exposure as preferred methods to learn HCT.Though not statistically significant, there was a trend reflecting improved comfort at providing HCT with the P and MP group (comfortable 71% vs. uncomfortable 29%) compared to the N group (comfortable 42% vs. uncomfortable 50%).Of the 26 residents who completed the pre-intervention questionnaire, ten completed the SiTEL module (38%), four completed the live workshop (15%), and two completed both interventions (8%). Thirteen completed the post-intervention questionnaire (50%): 9 N, 2 P, and 2 MP. There was a statistically significant difference in the knowledge scores of the residents comparing their pre and post-intervention responses (Table 2). This positive trend was noted in the small cohort who participated in the SiTEL module and the live workshop.

Conclusions: A multi-modal and interdisciplinary educational intervention that utilized online simulation training and a live case discussion had a positive effect on the knowledge of residents in N, P, and MP regarding HCT. Most respondents identified that training in this area would lead to improved health care outcomes for youth with epilepsy. Residents identified online resources and clinical experience as their preferred methods to learn about HCT. 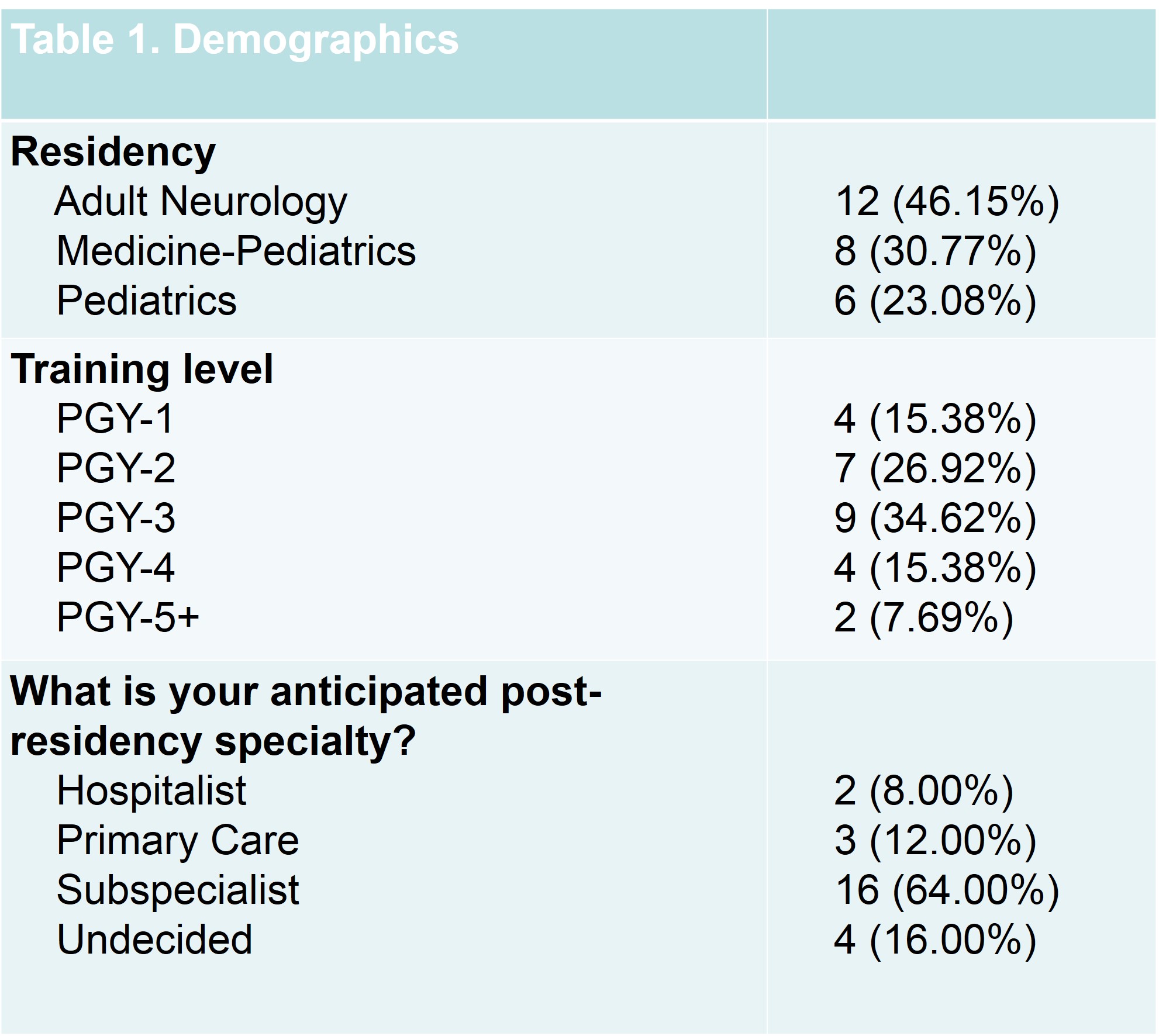