(547) Utility of MEG and TMS in the Pre-Surgical Evaluation of Young Children with Epilepsy: A Case Report

Rationale: Presurgical localization of sensorimotor function in the brain is critical for surgical planning and decision making in children with refractory epilepsy. Magnetoencephalography (MEG) and transcranial magnetic stimulation (TMS) are two non-invasive functional mapping techniques that are safe and well-tolerated in children. While MEG is capable of mapping somatosensory cortices in awake state and under sedation, TMS motor mapping does not require sedation even in very young children. We demonstrate the combined utility of MEG and TMS in mapping somatosensory and motor cortices in young children.

Methods: A three-year-old Caucasian male with a four-month history of brief focal atonic seizures originating from the right hemisphere was evaluated at our comprehensive epilepsy monitoring unit. Patient had a nine month history of one to two events a day of sudden loss of tone on the left side of his body lasting for approximately 30 seconds to one minute. The child underwent MRI, and functional mapping with MEG and TMS. Somatosensory mapping using electrical stimulation of bilateral median nerves was performed in MEG under sedation. Sedation was induced by propofol and dexmedetomidine and maintained by low-dose propofol infusion for the remainder of the procedure. The child also underwent TMS in awake state. The left- and right-hand motor cortices were mapped using MRI guidance while recording electromyography from the small muscles of the hand and forearm. The cortical locations, latencies, and amplitudes of the TMS-elicited motor evoked potentials (MEPs) were recorded.

Results: The MRI showed a 4 cm non-enhancing cortical and subcortical lesion in the right superior parietal lobule (see Figure 1) suggestive of a low grade neoplasm. Median nerve stimulation resulted in a robust early latency response localized to the contralateral postcentral gyrus. In the right hemisphere, the hand somatosensory cortex was localized to the anterolateral margin of the lesion (Figure 1A). Both right and left primary hand motor cortices were successfully mapped by TMS. The right primary hand cortex mapped in the resting muscle state was limited to the precentral gyrus and the central sulcus, and anterior to the lesion (Figure 1B). The patient underwent a craniotomy and microsurgical tumor resection guided by presurgical mapping. Post-resection electrocorticography showed no epileptiform activity. Histopathology was consistent with dysembryoplastic neuroepithelial tumor, WHO grade I. Post-operatively, the child was seizure free with no sensory or motor deficits and currently remains so (12 months post-surgery).

Conclusions: This case represents a good example of a safe and an effective use of two non-invasive techniques to localize critical eloquent cortices in a young child that aided the neurosurgeons in complete resection of the tumor while sparing sensory and motor functions.

Funding: Please list any funding that was received in support of this abstract.: n/a 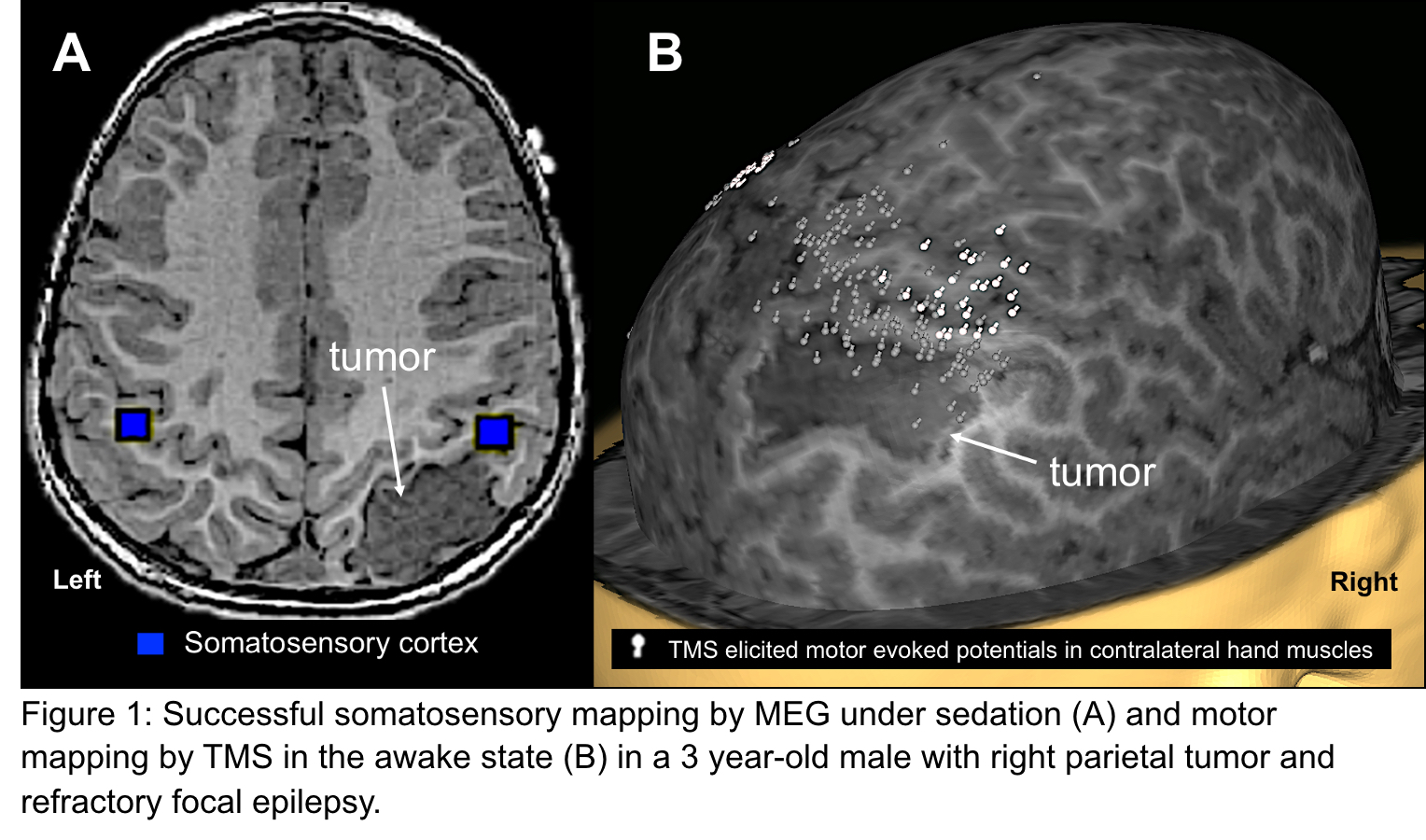