Rationale: Long QT syndrome (LQTS) is a genetic ion channel disease that leads to cardiac QT prolongation and a high risk of arrhythmias. Also, LQTS2 patients are at an increased risk of seizures, and LQTS2 mutations are reported in SUDEP cohorts. We investigated the susceptibility to pharmacologically induced seizures, and the prevalence and conditions for seizure related sudden death in WT and LQTS2 knock-in mutant rabbits. We hypothesized that LQTS2 rabbits exhibit an increased susceptibility to pharmacologically induced seizures and seizure related sudden death.

Results: The minimum dose for epileptiform discharges and motor seizures was lower in LQTS2 vs. WT rabbits. At low concentrations of PTZ (< 6 mg/kg), LQTS2 rabbits were less likely to be free of each EEG abnormalities and motor seizures. There was a significantly higher percentage of LQTS2 rabbits that had motor seizures at 4 mg/kg PTZ. There were no differences in the minimum dose for generalized tonic-clonic seizures (GTCS) in WT vs. LQTS2 rabbits. After having a GTCS, the incidence of another motor seizure was higher in LQTS2 vs. WT rabbits. Despite similar GTCS durations, LQTS2 rabbits were more likely to die after having a GTCS (8:16 LQTS2 vs. 1:6 WT rabbits died.) WT and LQTS2 survival curves separated at 5 mg/kg, and there was a significant decrease in survival of LQTS2 vs. WT rabbits at 9 mg/kg PTZ. The cascade leading up to sudden death included post-ictal generalized EEG suppression (PGES), apnea, bradycardia, sinus tachycardia, ventricular tachyarrhythmias (e.g., ventricular fibrillation), and asystole. A LQTS2 rabbit died spontaneously with no abnormalities noted on post mortem examination and full rigor in < 2 hours, which is suggestive of a fatal convulsive seizure.

Conclusions: The minimum threshold for PTZ-induced EEG discharges and motor seizures were lower in LQTS2 vs. WT rabbits. After experiencing a GTCS, LQTS2 rabbits were more likely to develop additional seizures with each subsequent dose of PTZ, while WT rabbits were resistant to more seizures. There was a higher prevalence of fatal seizures in LQTS2 rabbits. While clinical studies have shown an association between LQTS and epilepsy, we have previously been unable to completely rule out syncope and arrhythmia misdiagnoses. A LQTS2 mutation confers an increased risk of epileptic seizures and seizure related sudden death.

Funding: Please list any funding that was received in support of this abstract.: American Heart Association and American Epilepsy Society 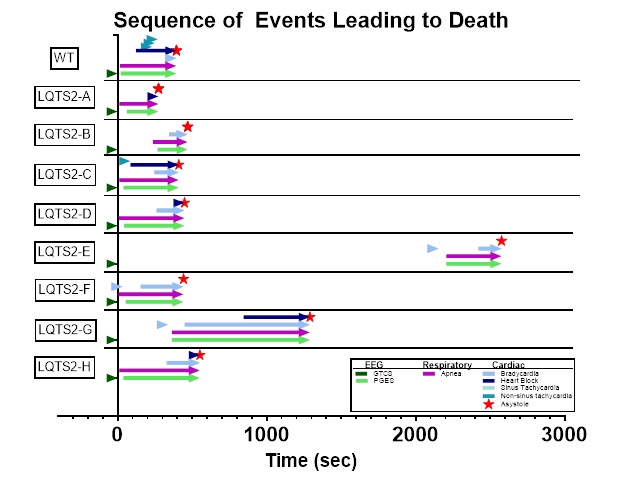