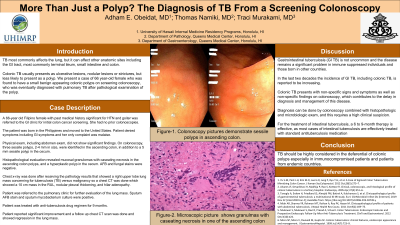 Introduction: TB most commonly affects the lung, but it can affect other anatomic sites including the GI tract. On colonoscopy, colonic TB usually presents as ulcerative lesions, nodular lesions or strictures and less likely to present as a polyp. We present a case of a 66 year old female who was found to have small benign appearing colonic polyps on screening colonoscopy, who was eventually diagnosed with pulmonary TB after pathological examination of the polyp.

Methods: A 66-year Filipino female with past medical history significant for HTN and goiter was referred to the GI clinic for initial colon cancer screening. She had no prior colonoscopies. The patient was born in the Philippines and moved to the United States in 1990. She had no family history of GI malignancies. She denied GI symptoms and her only other complaint being malaise. Physical exam including GI exam did not show significant findings. On colonoscopy, three sessile polyps 2-4 mm in size were identified in the ascending colon, in addition to a 5 mm sessile polyp in the cecum. Histopathological evaluation revealed mucosal granulomas with caseating necrosis in the ascending colon polyps. AFB and fungal stains were negative. CXR was done after receiving the pathology results that showed a right upper lobe lung mass concerning for TB vs malignancy so a chest CT with contrast was done which showed a 10 cm mass in the RUL with nodular pleural thickening, hilar and right internal mammary adenopathy. After further questioning, patient mentioned that she had a cough productive of yellowish sputum of one month duration associated with night sweats but denied any other symptoms. Patient was referred to the pulmonary clinic for further evaluation of the lung mass, sputum AFB stain and sputum culture was positive, and she was treated with anti-tuberculosis drug regimen for 9 months. Patient reported significant improvement in symptoms and follow up chest CT scan showed regression in the lung mass.

Discussion: GI TB is not uncommon and the disease remains a significant problem in immune suppressed individuals and those born in other countries. Colonic TB presents with non-specific signs and symptoms as well as non-specific colonic findings which contributes to the delay in diagnosis and management of this condition, so we recommend considering TB in the deferential of colonic polyps in immune suppressed patients and patients with risk factors for TB.