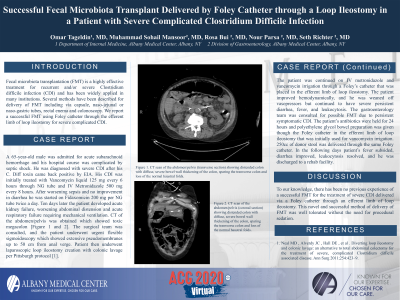 Introduction: Fecal microbiota transplantation (FMT) is a highly effective treatment for recurrent and/or severe Clostridium difficile infection (CDI) and has been widely applied in many institutions. Several methods have been described for delivery of FMT including via capsule, naso-jejunal or naso-gastric tubes, rectal enema and colonoscopy. We report a successful FMT using Foley catheter through the efferent limb of loop ileostomy for severe complicated CDI.

Methods: A 65-year-old male was admitted for acute subarachnoid hemorrhage and his hospital course was complicated by septic shock. He was diagnosed with severe CDI after his C.diff toxin came back positive by EIA. His CDI was initially treated with Vancomycin liquid 125 mg every 6 hours through NG tube and IV Metronidazole 500 mg every 8 hours. After worsening sepsis and no improvement in diarrhea he was started on Fidaxomyicn 200 mg per NG tube twice a day. Ten days later the patient developed acute kidney failure, worsening abdominal distension and acute respiratory failure requiring mechanical ventilation. CT of the abdomen/pelvis was obtained which showed toxic megacolon. The surgical team was consulted and the patient underwent urgent flexible sigmoidoscopy which showed extensive pseudomembranes up to 50 cm from anal verge. Patient then underwent laparoscopic loop ileostomy creation with colonic lavage per Pittsburgh protocol.
The patient was continued on IV metronidazole and vancomycin irrigation through a Foley’s catheter that was placed in the efferent limb of loop ileostomy. The patient improved hemodynamically and he was weaned off of vasopressors but continued to have severe persistent diarrhea, fever, and leukocytosis. The gastroenterology team was consulted for possible FMT due to persistent symptomatic CDI. The patient’s antibiotics were held for 24 hours and polyethylene glycol bowel preparation was given though the Foley catheter in the efferent limb of loop ileostomy that was initially used for vancomycin irrigation. 250cc of donor stool was delivered through the same Foley catheter. In the following days patient’s fever subsided, diarrhea improved, leukocytosis resolved and he was discharged to a rehab facility.

Discussion: To our knowledge, there has been no previous experience of a successful FMT for the treatment of severe CDI delivered via a Foley catheter through an efferent limb of loop ileostomy. This novel and successful method of delivery of FMT was well tolerated without the need for procedural sedation. 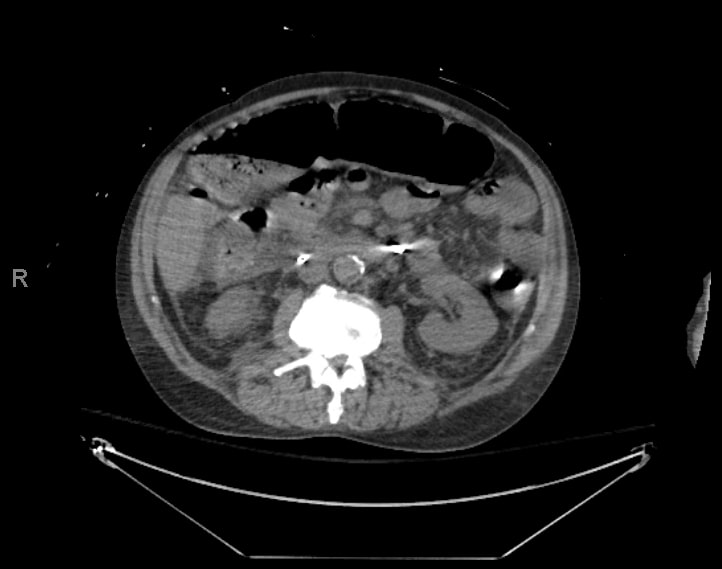 Computed Tomography of the abdomen/pelvis (transverse section) showing distended colon with diffuse, severe bowel wall thickening of the colon, sparing the transverse colon and loss of the normal haustral folds. 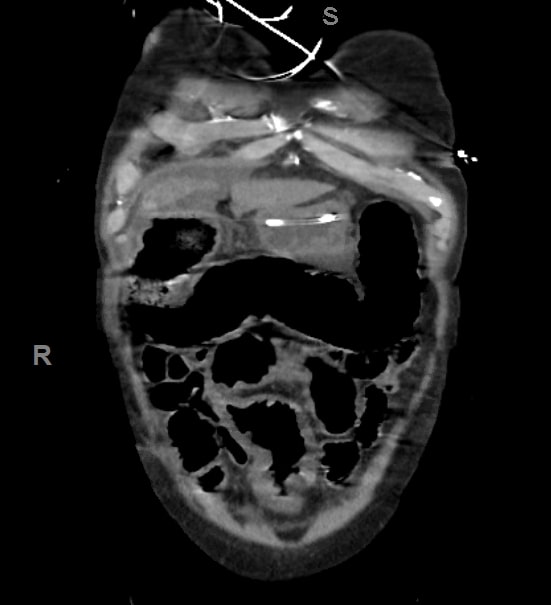 Computed Tomography of the abdomen/pelvis (coronal section) showing distended colon with diffuse, severe bowel wall thickening of the colon, sparing the transverse colon and loss of the normal haustral folds.