P0561 (S1683). - Cruising and Camping out in the Blood: A Rare Case of Campylobacter coli Bacteremia 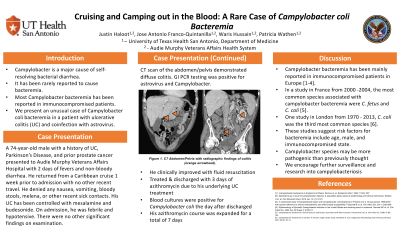 Methods: A 74-year-old male with a history of UC, Parkinson’s Disease, and prior prostate cancer presented to Audie Murphy Veterans Affairs Hospital with 2 days of fevers and non-bloody diarrhea. He returned from a Caribbean cruise 1 week prior to admission with no other recent travel. He denied any nausea, vomiting, bloody stools, melena, or other recent sick contacts. His UC has been controlled with mesalamine and budesonide. On admission, he was febrile and hypotensive. There were no other significant findings on examination. CT scan of the abdomen/pelvis demonstrated diffuse colitis. GI PCR testing was positive for astrovirus and Campylobacter. The patient clinically improved with fluid resuscitation and was discharged with a 3-day course of azithromycin due to his immunosuppression secondary to chronic steroid treatment for UC. A day after discharge, his blood cultures were reported positive for Campylobacter coli (C. coli). He was contacted, stated he continued to clinically improve, and was instructed to continue azithromycin for a total of 7 days.


Discussion: We present a rare case of C. coli bacteremia associated with astrovirus in an immunocompromised patient. There are 17 species of Campylobacter with the most frequently reported infection with C. jejuni and C. coli. In a study done in France from 2000 to 2004, C. coli species composed only 9% of cases campylobacter bactermia. Another study in London from 1970 to 2013 demonstrated the most common species of campylobacteriosis were C. jejunum at 48.8%, unspeciated campylobacter at 31.7%, and C. coli at 7.3%. These studies also demonstrated that risk factors for Campylobacter bloodstream infection include age, male gender, and immunocompromised state and have also been associated with increased risk of mortality. Despite having met these risk factors, our patient improved with minimal interventions and was managed in an outpatient setting. Our case suggests that campylobacter species may be more pathogenic than previously thought, and we encourage further surveillance and research into campylobacteriosis.