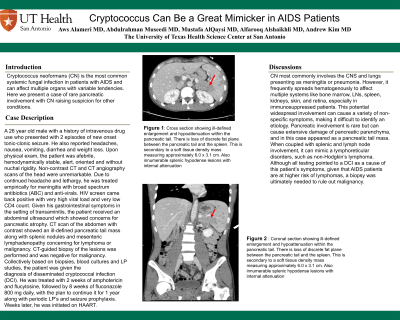 Introduction: Cryptococcus neoformans (CN) is the most common systemic fungal infection in patients with AIDS and can affect multiple organs with variable tendencies. Here we present a case of rare pancreatic involvement with CN raising suspicion for other conditions.

Methods: A 26 year old male with a history of intravenous drug use who presented with 2 episodes of new onset tonic-clonic seizure. He also reported headaches, nausea, vomiting, diarrhea and weight loss. Upon physical exam, the patient was afebrile, hemodynamically stable, alert, oriented and without nuchal rigidity. Non-contrast CT and CT angiography scans of the head were unremarkable. Due to continued headache and lethargy, he was treated empirically for meningitis with broad spectrum antibiotics (ABC) and anti-virals. HIV screen came back positive with very high viral load and very low CD4 count. Given his gastrointestinal symptoms in the setting of transaminitis, the patient received an abdominal ultrasound which showed concerns for pancreatic atrophy. CT scan of the abdomen with contrast showed an ill-defined pancreatic tail mass along with splenic nodules and mesenteric lymphadenopathy concerning for lymphoma or malignancy. CT-guided biopsy of the lesions was performed and was negative for malignancy. Collectively based on biopsies, blood cultures and LP studies, the patient was given the diagnosis of disseminated cryptococcal infection (DCI). He was treated with 2 weeks of amphotericin and flucytosine, followed by 8 weeks of fluconazole 800 mg daily, with the plan to continue it for 1 year along with periodic LP’s and seizure prophylaxis. Weeks later, he was initiated on HAART.

Discussion: CN most commonly involves the CNS and lungs presenting as meningitis or pneumonia. However, it frequently spreads hematogenously to affect multiple systems like bone marrow, LNs, spleen, kidneys, skin, and retina, especially in immunosuppressed patients. This potential widespread involvement can cause a variety of non-specific symptoms, making it difficult to identify an etiology. Pancreatic involvement is rare but can cause extensive damage of pancreatic parenchyma, and in this case appeared as a pancreatic tail mass. When coupled with splenic and lymph node involvement, it can mimic a lymphoreticular disorders, such as non-Hodgkin’s lymphoma. Although all testing pointed to a DCI as a cause of this patient’s symptoms, given that AIDS patients are at higher risk of lymphomas, a biopsy was ultimately needed to rule out malignancy. 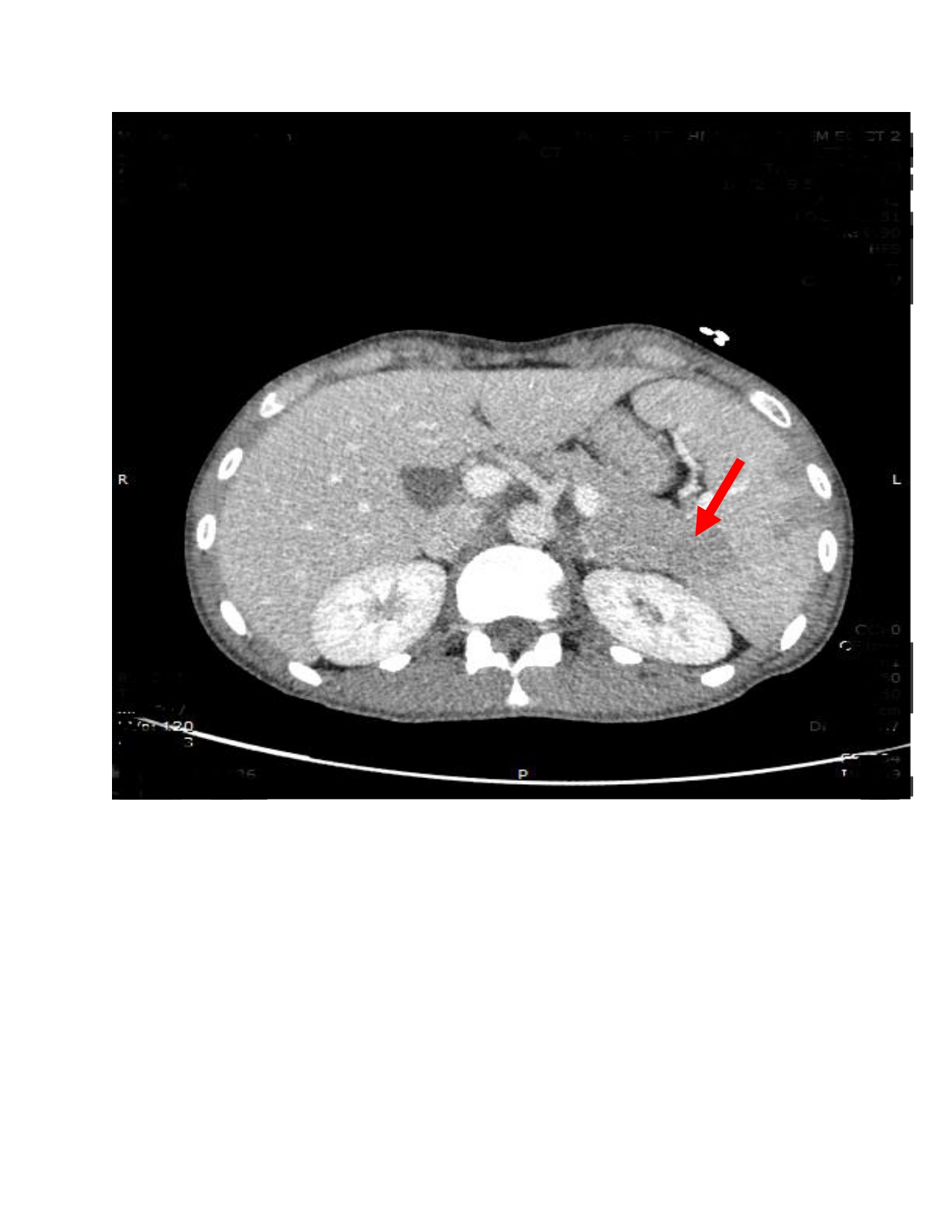 Cross section showing ill-defined enlargement and hypoattenuation within the pancreatic tail. There
is loss of discrete fat plane between the pancreatic tail and the spleen. This is secondary to a soft
tissue density mass measuring approximately 6.0 x 3.1 cm. Also innumerable splenic hypodense
lesions with internal attenuation 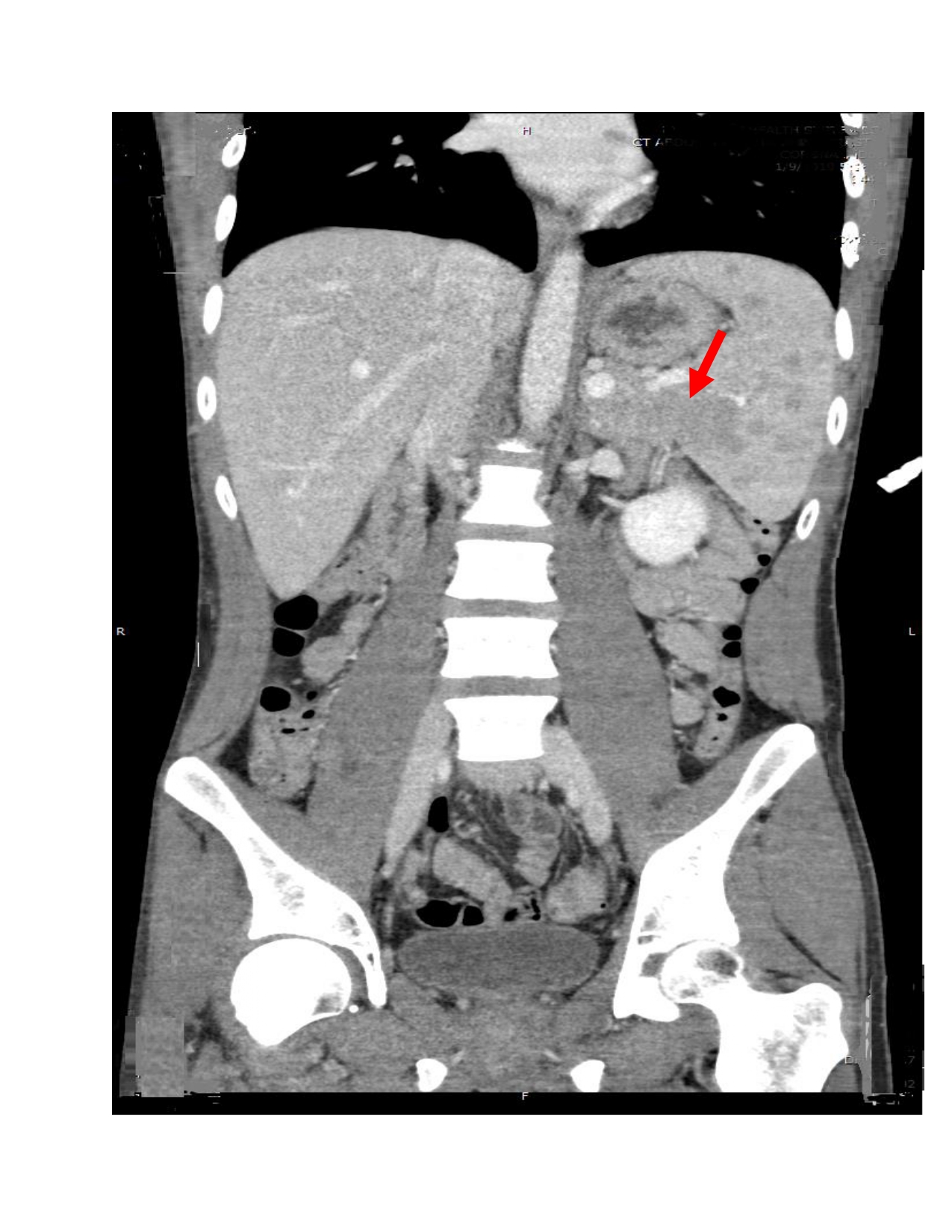 Coronal section showing ill-defined enlargement and hypoattenuation within the pancreatic tail. There
is loss of discrete fat plane between the pancreatic tail and the spleen. This is secondary to a soft
tissue density mass measuring approximately 6.0 x 3.1 cm. Also innumerable splenic hypodense
lesions with internal attenuation